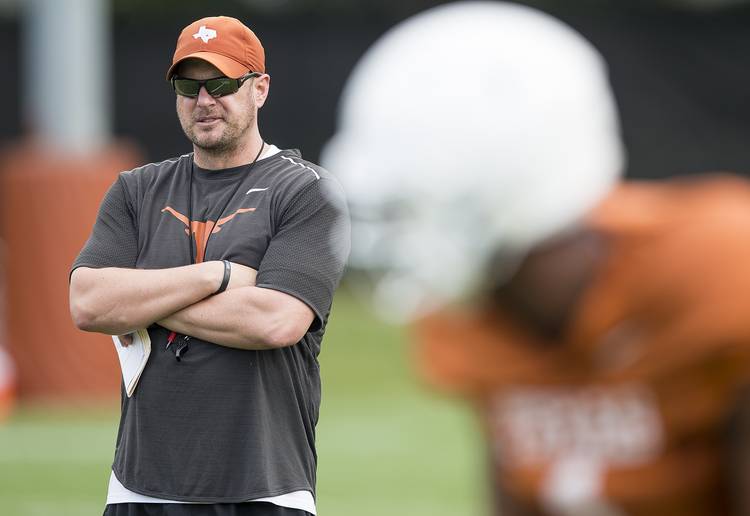 Not even two practices into the second season of the Tom Herman regime, it’s quite possible there has already been a major breakthrough.

The players may have finally figured it out, the team’s encouraging, No. 21 preseason national ranking in the Coaches Poll notwithstanding.

After conversations with the coach and as many as a dozen players, it would appear — are you sitting down — that this team truly understands the Longhorns’ place in the college football world. Hint: it’s not at the top.

It seems like the ugly truth has finally dawned on them. A 7-6 record and a 23-27 record over the last four seasons don’t lie. Nor does the following string of finishes in the Big 12 since the 2009 national championship game — last in the South Division, then sixth, third, tied for second, tied for fourth, tied for fifth, tied for sixth and tied for fourth.

Texas is not back.

But the players are all saying that, and that’s good news and a refreshing change at a place that celebrates its resurrection every crucial first down or two. (I will pause for the cynics out there to rush to Twitter to mock this revelation. … OK, then.)

With that out of the way, I can report that this represents a huge step in returning Texas to its rightful place in the spectrum of things. Quite simply, Texas hasn’t done anything yet. Again, it’s August, the time of year when losing teams beat their chests about bond-forming barbecues and pool parties and, dare we remind you, competitive ping-pong contests.

Herman, one of the 65 coaches who vote in that coaches poll, declined Friday to reveal where he ranked his own team and threw out coachspeak that the only poll that matters is the final one. That’s wrong. Nearly every coach trying to build — or rebuild — a program, especially a former national powerhouse like Texas, knows a Top 25 ranking can be precious at any point in terms of prestige, confidence in a new head coach and recruiting.

“There’s momentum,” Herman said about where his team is. “I don’t think anyone can deny that fact. We won a game in January (December, actually), but it seems seven years ago. The momentum was created in the offseason and with player development. I think there’s a quiet confidence. But we don’t need to be concerned with what the public or the media thinks of us. We’re concerned with what the people in our locker room, in our bunker, in our meeting rooms think.”

Maybe the players have finally clued in.

But hear it from them.

“It’s very promising,” senior wideout Jerrod Heard said of a season forecast that includes a No. 10 preseason national ranking by Phil Steele’s summer magazine. “But I don’t want to jump too far ahead about what we can do.”

Jump ahead. Heck, the Longhorns used to take Bob Beamonesque leaps at the slightest hint of a turnaround.

Texas certainly got ahead of itself last season. Pumped up with unrealistic expectations, the Longhorns went out and laid an egg in the opener. They were ahead on the scoreboard against unheralded Maryland for just more than five minutes before trailing 27-7 in the second quarter and giving the Big Ten team its first win over a ranked club in seven years. Texas allowed 482 yards and lost badly at home to the Terrapins.

The Longhorns made it a respectable — respectable, really? — 10-point loss, thanks only to three non-offensive touchdowns from the defense and kick returners. They ran for just 98 yards.

“Basically, we got our ass whupped,” linebacker Gary Johnson said. “It was a feeling we couldn’t get used to. We hope to be better. We had a lot of plays that could have been made last year. We just didn’t finish.”

Which is why Herman and his staff have adopted that as their catchphrase for 2018. Near finishes cost the Longhorns dearly against USC, Oklahoma State, Texas Tech and even Oklahoma after trailing 21-0 in the first half.

But they were also fortunate to get by West Virginia when Mountaineers quarterback Will Grier busted his hand and also held off Kansas State in double overtime. So maybe some of the breaks evened out.

Texas’ surprisingly strong defense finished second right behind TCU’s in the Big 12. Could the Longhorns possibly improve on that ranking?

“We just got to keep putting in the work,” defensive end Malcolm Roach said, not biting. “I can’t answer that now. But I know we’re putting in a lot of work.”

Maybe Texas finally grasps that it really hasn’t accomplished very much, even with a winning record for the first time in four years and the program’s first bowl victory since 2012. Of course, that never stopped the Longhorns before from crowing they were once again back in national prominence.

No one’s forgotten the dramatic, double-overtime win over Notre Dame on a Sunday night just two years ago to open the season before a national audience. No sooner did Tyrone Swoopes leap into the end zone for the 50-47 victory over the 10th-ranked Irish than the Longhorns found themselves rated No. 11. That lasted all of one more week before a three-game losing streak erased the momentum and set the stage for a third straight seven-loss season and Charlie Strong’s exit.

Just as suddenly, Texas was not back. And still isn’t.

“We haven’t beaten anybody,” Heard said. “We just want to beat camp.”

And then there’s been the summer talk of how many elite players Texas has or doesn’t have. Herman even joked about it Thursday.

“To even be here,” cornerback Kris Boyd said, “you have to be elite.”

But Boyd added, “Until we start winning games, that’s when we can talk about being elite.”