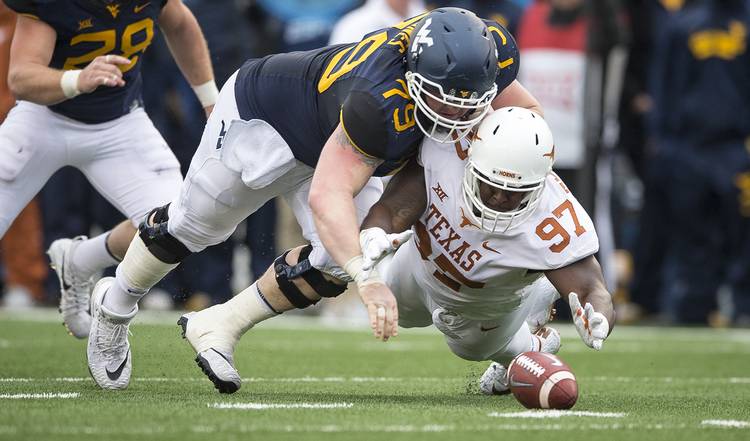 Chris Nelson had never played in a bowl game and was a few days from the postseason last December when the football gods dealt him a tough blow.

It was a basic run drill and the junior defensive tackle was doing his thing — occupying blockers to free up other teammates up to make a play — when safety Jason Hall came flying in from the secondary.

“It was a freak occurrence,” Nelson told me Thursday.

With big Chris watching from the sideline, the Longhorns went on to rout Missouri in the Texas Bowl behind a defense led by All-Big 12 tackle Poona Ford, Nelson’s fellow 2014 recruit. Nelson had hoped his injury would heal naturally but the injury kept him out of contact drills during the spring. He decided to undergo arthroscopic surgery.

Nelson is still wearing a brace during practice but only as a precaution before shedding it for good for this season. He is expected to anchor a Poona-less defensive line in 2018, an accepted responsibility that had the big man in good spirits following the sixth practice of the summer. Perhaps his mood came with the realization that the season opener at Maryland is just three weeks away or maybe it was because the Horns practiced inside the air-conditioned comfort of their practice bubble instead of the crop-killing Central Texas heat we’ve been experiencing lately.

“Coach (Tom Herman) said we earned the right to be inside and we’ll take it,” Nelson said.

Herman announced at Big 12 football media days that Nelson would play noseguard this fall after starting seven games at defensive end in 2017. The move inside was presumably predicated on two things: the loss of Ford and good depth in the pass rushing department with seniors Breckyn Hager and Charles Omenihu.

Nelson’s new gig comes with the understanding that production won’t always show up in the numbers. The position is built on the ability to clog the middle, allowing other defensive linemen and linebackers to get the glory. Ford was special in that he could not only battle double teams but also shred blockers to wreak havoc in opposing backfields.

Those 18 tackles and a sack from a year ago may go down as his statistical peak, but it won’t mean his importance to the defense will have decreased. Ask his teammates and they will tell you that Nelson could be a sleeping giant on a defense that grew by leaps and bounds during in defensive coordinator Todd Orlando’s first season.

“That guy is always going to be the hardest worker on the D-line only because he has that experience and he’s someone everyone looks up to,” said offensive lineman Patrick Vahe. “He reminded me that it’s our last year, our last go-around. Let’s just keep working and not worry about anything.”

Ford was Nelson’s role model and living proof that ability and want-to can trump physical attributes in a game where size and speed are deemed so important. Nelson’s name didn’t appear on the media-selected All-Big 12 preseason team, which didn’t go unnoticed by the man with a disarming smile and dry wit.

“I wouldn’t say I’m being overlooked but at the end of the day, the elbow was a setback so a lot of people forgot,” he said. “All I can do is go out the and show myself. Show and improve.”

The next few days will be spent battling double and triple teams and possibly squaring off against his buddy Vahe during the team’s bull-in-the-ring sessions that usually open practice.

“I win all my fights,” Nelson said.

Vahe told us he wouldn’t mind testing him since the two haven’t matched up.

“We’re brothers but we’re going at it,” Nelson said. “We’re scrapping out there on the football field.”

So will the Horns be better on defense with their new noseguard? He thinks so.

“We know the defense better, we know the coaches better,” he said. “The first year (under Herman and Orlando) coming in, everything is a little shaky. But this year, we all know what we’re supposed to do and how to get the job done. That’s why things will be done a lot better.”

Bohls: Texas players — even with the ranking — are being realistic, not jumping ahead

Golden: Texas players are facing The Wall as they battle August’s streaking temperatures