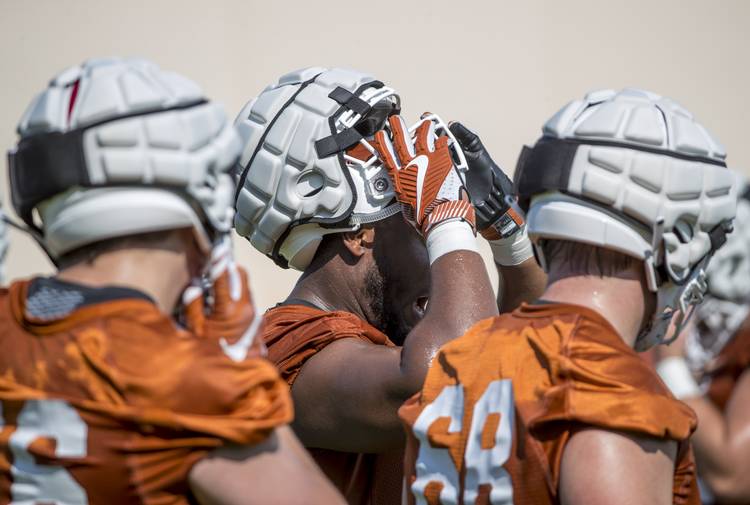 It has already shown its sturdiest to several Texas incomers who have unknowingly run headlong into an opponent much more formidable than any teammate.

Some will take awhile to recover. Others will fall by the wayside. More will follow.

And for a more experienced crew of old heads on the Forty Acres, it’s an all too familiar foe, not as daunting but still respected.

It’s not a concrete structure or something built on the border, but more of an invisible monster that could show up at any moment to test a football player’s resolve. Maybe during that final round of wind sprints, or on a day when the body simply won’t obey, or worse yet — when the oppressive August heat starts to win that daily mental tug of war.

With two weeks to go before the season opener at Maryland, the Texas Longhorns — who will hold another scrimmage on Saturday — are trying to power through these killer Central Texas temps and their head coach is doing everything in his power to keep his team’s psyche intact.

The toughest job for the coaches is understanding that not all players hit the wall on the same day; managing upward of 100 young adults engaging in their own internal struggles can’t be easy.

“The sports science of it shows you have to peak on Saturday, September 1 and not on August 10,” head coach Tom Herman said after Thursday’s practice in the team’s indoor practice facility. “We have to do a great job of managing that from a time perspective and a contact perspective, but we’ve still got to get our reps in. We’ve got to get the practice in.”

Acclaimed author David Halberstam wrote: “Flames were coming from a human being; his body was slowly withering and shriveling up, his head blackening and charring. In the air was the smell of burning human flesh; human beings burn surprisingly quickly.”

Then later, “As he burned he never moved a muscle, never uttered a sound, his outward composure in sharp contrast to the wailing people around him.”

In the years that followed, the monk became known as the Burning Monk. Professors since have used his story to help illustrate tough life lessons while ministers often drop his name as an example of sacrifice.

“I’m not asking our guys to set themselves on fire, don’t get me wrong,” Herman said. “The guy lit himself on fire and sat there and didn’t move an inch and didn’t utter a sound. That tells you a lot about the human mind and if you train it properly, there’s pretty much not anything you can’t do.”

The mental obstacles many players must overcome before a season opener — especially the freshmen who are away from home for the first time and dealing with the challenges that come with college — are compounded when juxtaposed against a month-long physical and mental battle against others vying for playing time, coaches’ expectations and internal doubts.

Take Sam Ehlinger, for example. This is the quarterback’s second camp and he’s better equipped to handle the heat this time around. Reason being, he survived the first one.

That gives him a quiet assurance that he can and will do it again, a realization that allows him to put his entire focus on attempting to beat out Shane Buechele for the starting job.

“We have the best trainers, the best strength staff and the best coaches in the nation,” Ehlinger said this week. “They understand what our bodies are going through and they understand how to reward us with hydration and rest and stuff of that matter.”

Herman and his staff have to know when to push and when to pull when it comes to attempting to have the team in peak condition for the opener. Boxing trainers have sworn for the better part of a century that there is such a thing as being over-trained and to that end, timing is of the utmost importance.

Add to that the recent death of Maryland player Jordan McNair and the school’s coaching and strength staff’s reported negligence. With Maryland’s placing head coach D.J. Durkin on administration leave while an investigation is conducted, it’s an unspoken reminder of a line that exists between solid preseason conditioning and just plain going overboard.

Herman says his coaches and trainers are on top of it.

Maryland will be waiting in the wings. For now, it’s the wall.

Bohls: Texas gets what it pays for in Todd Orlando and he’s worth every cent