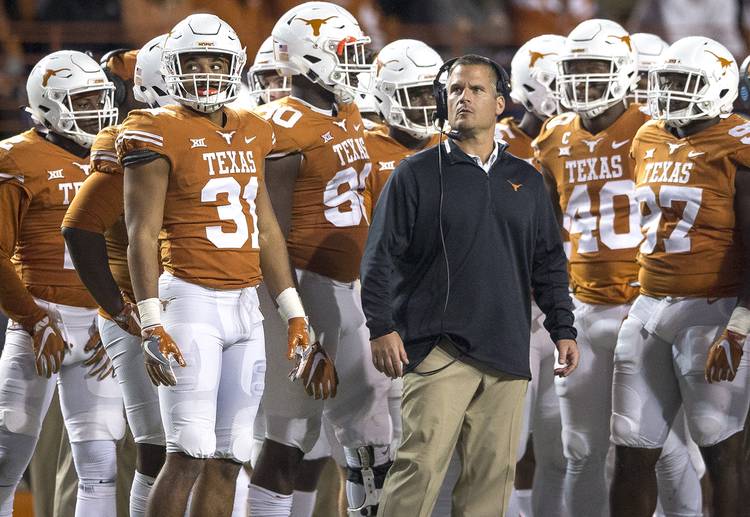 Todd Orlando didn’t spring for anything extravagant in the offseason.

Not a new 10,000-square foot house in Tarrytown. Not a new ski boat for lazy afternoons on Lake Travis. No new mountain bike or a vacation to the French Rivera.

In fact, the Texas defensive coordinator said he didn’t spend a dime on himself after getting a pay hike from just over $1.09 million to a base salary of a whopping $1.7 million, the highest amount ever forked over to a Longhorns non-head coach.

So no scoring spree for the best defensive coordinator in the Big 12?

Of course, he may have upgraded on his trimmer for his military-style buzz cut, but that’s about it. He’s not measuring himself against LSU’s Dave Aranda and his $2.5 million annual salary or Clemson’s Brent Venables, who will pull down a cool $2 mil this season.

That’s simply the price of doing business in college football these days because as many as nine head coaches are cashing $5 million a year now. Money won’t change the intense Orlando, who’s candid, straightforward and a good quote.

As for the offseason, he was too busy to shop, instead burying himself in the football compound studying tape, borrowing from other 3-4 defenses like Wisconsin’s and working non-stop to make sure there’s no drop-off on a Texas defense that surprised last season.

Surprised? Try stunned. The defense ranked second in the Big 12 behind TCU in nearly every category in 2017 and may do so again, provided no more linebackers get injured and freshman defensive backs like Caden Sterns and B.J. Foster are as good as advertised.

Orlando pushes and pushes hard. It was clear he wasn’t thrilled with Saturday’s scrimmage because the offense edged out the defense “in a close ball game.” But when asked if he recalled any turnovers created by his unit, Orlando thought a minute before saying, “I don’t remember. But we had some jarring hits.”

Jarring hits are good. And figure to be plentiful as Orlando rides the talents of linebacker Gary Johnson and cornerback Kris Boyd and a slew of newcomers to produce a physical, stingy defense, which isn’t easy to do in the score-every-minute Big 12. He’s that good of a coach, and he’s worth every penny.

“Todd does an amazing job relating to players,” head coach Tom Herman said. “He’s very demanding, yet the players all know that he loves them. He’s also elite at uncovering an opponent’s strengths and devising a gameplan to take those strengths away as best as possible.”

Like luring pass-happy Oklahoma State with a six-man front that enticed it to stick to a running game and holding the potent Cowboys to 13 points. Like confusing USC’s Sam Darnold and forcing him into two interceptions. Like stifling Oklahoma’s offense for three quarters. Like holding six opponents under 17 points.

Orlando isn’t out to out-scheme or trick anyone. He’s into effort and intensity and physicality. Big-boy football, in other words, which had been lacking around these parts.

His original three-year contract rolled over an additional year to keep him in Austin through the 2020 season. Yeah, good luck with that.

Don’t suggest for a second that the 47-year-old defensive coordinator has one foot out the door because that would suggest he’s not totally vested in Texas. He’s as committed as ever. But make no mistake he’ll be in big demand after this season, not unlike a sampling this last offseason when there was mild flirtation with SMU although Orlando said, “Realistically, nothing ever materialized.”

That said, Orlando is, in effect, a head coach-in-waiting.

Slow down. Before you get your shorts in a tangle, know that we’re not referring to the disastrous Will Muschamp head coach-in-waiting snafu under Mack Brown. That never materialized either. It says here Brown was on board with that Texas decision only in theory because he just didn’t want the valued Muschamp to leave for another job, which is what he eventually did, bolting for Florida on one of the year’s biggest recruiting weekends at Texas.

We would never suggest athletic director Chris Del Conte give that title to Orlando because both he and Herman are way too young, and Orlando is certain to take his first head coaching job soon, maybe as soon as December. Of course, that all depends on what kind of attractive job opens up.

This Pittsburgh native and former Wisconsin linebacker is built for power defense in the Big Ten or Northeast. Heck, maybe if Texas can somehow topple giant-killer Maryland in a grudge rematch on Sept. 1, the Terrapins might come callingo. Now he did give up 51 to Maryland last September. But he sure seems to be of the straight-and-narrow mold that Big Ten schools desire.

Other places where coaches are on the hot seat and where Orlando might rate a hard look include Illinois, BYU, Colorado and maybe even Missouri.

Ed Orgeron may not be on sound footing at LSU, and oh wouldn’t the Tigers relish prying Orlando away from Texas after feeling jilted by Herman two years ago. Maybe Orlando will stay in the Big 12 confines if Kliff Kingsbury stumbles. Texas Tech might should swing the pendulum the other way and go defense if the Red Raiders falter. Surely, Orlando’s too smart to go to Kansas.

Just don’t think Orlando will be distracted by all these, uh, distractions. A dynamite defense is probably the one reliable thing about Texas this season. And a higher tax bracket for Orlando soon.

Golden: Texas players are facing The Wall as they battle August’s streaking temperatures