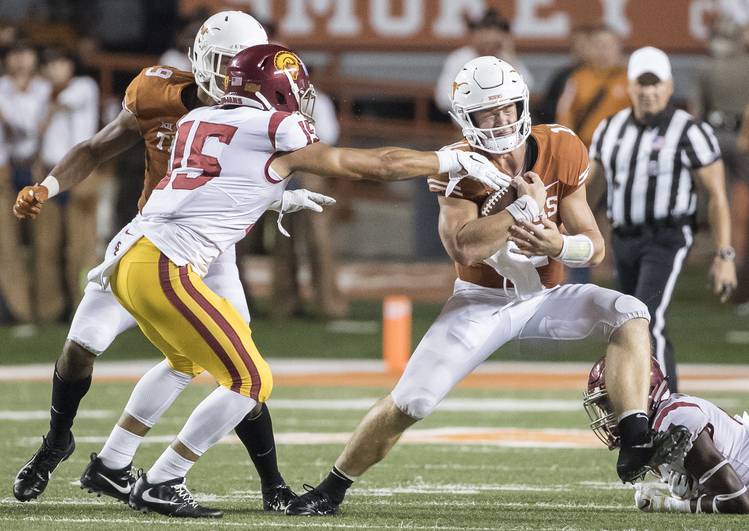 But Tom Herman will have to find another playmaker on the ground to complement his sophomore quarterback if the Longhorns are to stand a reasonable chance of upsetting seventh-ranked Oklahoma in the Cotton Bowl. Ehlinger can’t do it alone. He had two of Texas’ three 100-yard performances last season — Chris Warren III had the other — but that was a team that barely got to 7-6 with the bowl win.

A year ago in this OU matchup, Ehlinger topped all Texas rushers when he ran the ball 22 times for 106 yards. Frequently, he was running for his life. But that dynamic helped UT overcome a 20-0 deficit and nearly pull off the shocker. But Ehlinger had little company.

The next most efficient Longhorns ground-gainer in that October game? Technically, it was sophomore Kyle Porter, who wasn’t really all that efficient. He gained precious little ground. Just 7 yards total.

Next was Toneil Carter. He stepped off 6 yards. Surely, you remember those.

And Warren, before he became a tight end, ran for 4 yards. On six carries. Don’t make me do the math.

Such output won’t move the chains. Or the needle. And it was a big reason Texas lost to OU.

The long and mostly short of it was that Texas couldn’t run a lick, except for the ever-elusive, ever-physical Ehlinger springing for some big gainers with many resulting in high-impact collisions. Hence the medical tent on the sidelines where boo-boos can be treated in private. Ehlinger spent some time in there last year.

Ehlinger’s a really good runner. Sometimes too good for his own good. But it’s part of what amps him up. Relying solely on him, however, puts way too much of an offensive burden on the Longhorns offense. He needs help.

“I think in gotta-have-it run situations, I think that’s where he shows up probably the most right now,” Herman said of Ehlinger, who broke off some runs to help kill the clock and seal the win over Kansas State. “Third and short. Trying to end the game. Run the clock out when everybody in the stadium pretty much knows you’re going to run the football.”

Longhorn Nation is still waiting for freshman Keaontay Ingram to take off. The Longhorns have yet to have a running back top 74 yards in a game much less clear the century mark, and that was by Cal transfer Tre Watson against Tulsa.

Herman and his offensive braintrust have to devise a way to keep Kyler Murray and that explosive OU offense off the field. They’d be wise to borrow a page out of Army’s playbook. The Cadets played keepaway with the Sooners, limiting OU to just 40 plays for the entire game in a near epic upset, and the Longhorns will need a similar game plan.

That calls for some muscle up front and something other than passes to Collin Johnson and Lil’Jordan Humphrey all day. Oklahoma doesn’t have a killer defense outside linebacker Kenneth Murray, who pretty much makes every tackle, and it would bode well for Texas if it could dominate the time of possession and keep its defense fresh to chase the other Murray.

Such a formula worked for Charlie Strong once in three tries against OU as he went body-surfing among his players and hand-slapping along press row at the post-game press conference following the win in 2015. Texas pulverized OU for 313 yards on the ground behind D’Onta Foreman and Johnathan Gray in a game where quarterback Jerrod Heard needed to throw just 11 times.

That kind of balance has to be very appealing for Herman. To achieve it, he’ll have to lean more heavily on Ingram, the lean running back with the most wiggle and quickness. OU only gives up 153 yards a Saturday on the ground, and that factors in a big 339-yard rushing output by Army. The Sooners have allowed 10 rushing touchdowns in five games, a good sign for Texas.

No one’s suggesting a move to the triple option. That would only expose Ehlinger to more hits, and running him by design is risky because he’s gone four straight games without an interception and hasn’t been beat up. Plus, it’s not like Herman has a stable of outstanding backs. Porter didn’t travel with the team to Kansas State and is contemplating redshirting. Daniel Young’s a bruiser who’s most effective in the fourth quarter against a tiring defense, and Watson’s carried the biggest load through five weeks.

But it can’t be all Sam.

Bohls: Longhorns on the rise on my ballot

Golden: When it comes to comparing Texas and Oklahoma receivers, size matters