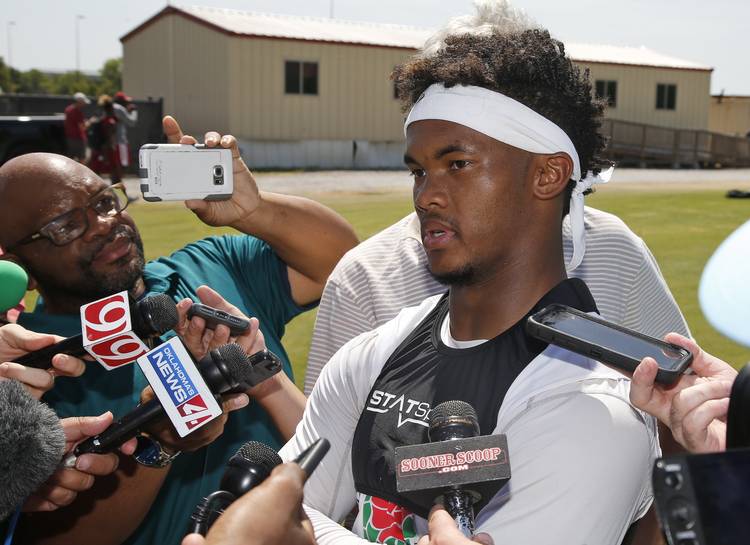 Texas lost to Baker Mayfield a year ago. As we all know, he was good. Real good. Heisman Trophy good. First pick of the NFL draft good. College Football Playoff semifinalist good. Lots of records good. But he’s gone.

Now the Longhorns get to face another quarterback who’s … even better?

No way. Can’t be. Can it? Is that even possible? What are the chances?

Talk about not being able to catch a break. That’s Tom Herman.

In his first season at Texas, Herman’s had to go up against — let’s see now — Sam Darnold and Will Grier and Drew Lock. Murderer’s row. Oh, yeah, and Baker.

Now his Longhorns will line up against Kyler Murray.

And he meant it.

Is it possible that Oklahoma is better at quarterback after Mayfield left? How about almost as good. But a different good.

And probably good enough to — dare we suggest it — give the Sooners back-to-back Heisman Trophy-winning quarterbacks. No other school has done that.

Through five games this season, Murray has bested Mayfield. In fact, he has a better passing efficiency rating (231.0), more touchdowns (21), more yards per pass attempt (13.4), more yards per completion (19.0) and more rushing yards per game (57.0) than not just Mayfield but also former Sooners Sam Bradford and Jason White through the first five games of their Heisman seasons.

Consecutive Heisman winners from the same school, possibly? That hasn’t happened since Ohio State’s Archie Griffin went back to back in 1974 and 1975. If you don’t include USC’s Matt Leinart and Reggie “Vacated” Bush in 2004 and 2005 — and we don’t — a single program hasn’t produced different consecutive winners since the Army tandem of Doc Blanchard and Glenn Davis were so honored in 1936 and 1937. Those Cadets were known as Mr. Inside and Mr. Outside, we presume because one preferred playing video games inside and the other liked nature.

Murray might be known as Mr. Everywhere — or Mr. Everything — because he can do it all. And not just on a football field. He’s even proficient at chess, although his momma says he’s gifted at Scrabble. And $4.66 million bonus-good in baseball.

“We laughed on Sunday night about the baseball,” Orlando said of Murray, who was taken with the ninth pick of this year’s draft by Oakland. “That there were only eight guys that general managers thought were better than Murray. He’s an exceptional athlete. He’s got an arm. He can spin it. And now he’s got a complete grasp of their offense.”

Swell. He’s started just eight college games in his career and already has his Ph.D. in Lincoln Riley Offense 301.

Nelson admires Murray’s quickness but said, “I know he’s going to run out of bounds when I chase him because he doesn’t want to get hit.”

So here’s a quarterback who after one season left Texas A&M, where his father, Kevin, was an elite quarterback with a strong build and a powerful arm but also a bum ankle that robbed him of an NFL career. Kyler did start three games as an Aggie and won two of them. Then he transferred to OU and sat behind Mayfield for two years, and now he has the world on a string.

Of course, he was good before he set foot in Norman. At Allen High School, he quarterbacked the football team to a 43-0 record and three state championships.

He might be one of the fastest high school players of all time, too. He reminds of Michael Vick, who could dart and dash like few others at Virginia Tech and then in a decorated but dogged NFL career spent mostly with the Atlanta Falcons.

Heck, the generously listed 5-foot-10, 195-pound Murray would probably shine at the next level, too, should he choose to stick with football. (He won’t.)

Mel Kiper Jr. this week said Murray is one of the best dual-threat quarterbacks he’s ever seen. He also said some NFL team could take him on Day 2 of next year’s draft and use him in special situations, not unlike the Ravens have Lamar Jackson.

Todd McShay goes Kiper one better, saying his “best early guess is there’s no way this type of natural talent would get out of Round 2.”

Of course, baseball would be the safer destination, not that trying to hit against Aroldis Chapman’s 105-mph flamer is cake.

Not that anyone should doubt Murray. Texas safety Brandon Jones called him “one of the quickest and most agile quarterbacks. Based off of watching film, I really haven’t seen anybody hit him. He’s not the biggest guy, but he always finds a way to break tackles and manage to get the first down.”

For sure, stopping Murray will be one of the biggest keys for Texas. No one’s come close yet. Which is why he remains one of the serious contenders to bring another Heisman to Norman.

“We’re all for challenges,” Texas nickel back P.J. Locke III said, “but that’s a crazy situation.”