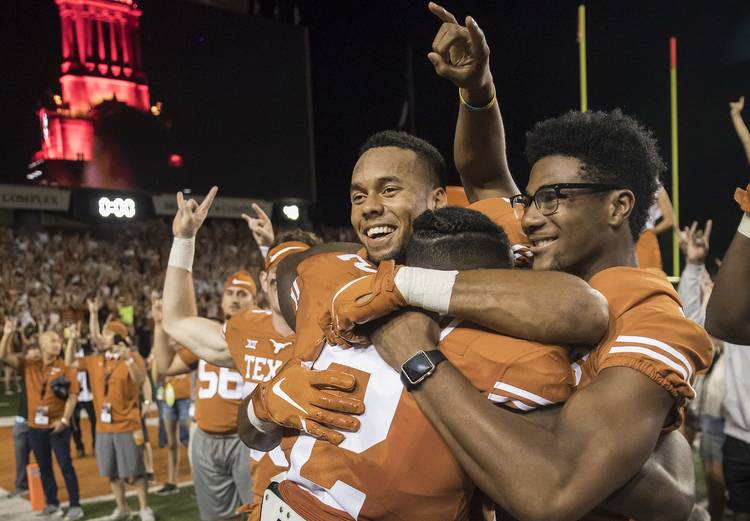 Texas is an incredible place when you’re winning. But it’s hell on losers.

These last four weeks have been as smooth and drama-free as the Longhorns have enjoyed in years. It’s amazing how different things feel around the Moncrief-Neuhaus Athletic Complex.

The program has found its footing in Tom Herman’s second season. The 19th-ranked Longhorns (4-1, 2-0 Big 12) are back in the national spotlight heading into the Red River Showdown. Texas hasn’t won four straight since 2013, when the Longhorns won six in a row that year. And ESPN’s “College GameDay” is back, eager to showcase Texas-Oklahoma on Saturday.

Isn’t this better than zigzagging from wins to losses each week?

Senior tight end Andrew Beck is one of the few players left who has had first-hand dealings with three UT head coaches — Mack Brown, Charlie Strong and Herman. He’s seen it all around here, except a Big 12 championship, of course.

Asked about the last four weeks, Beck said, “I’m glad they looked smooth because winning doesn’t just happen. There’s been a lot of work that we’ve put in with the coaches and players.”

It’s stunning how the mood is so radically different than anything we’ve seen the last four years.

No, Texas is not back, at least not all the way yet. I hate that phrase, by the way. Consider this an acknowledgment that the Longhorns have found their footing and are once again acting like the big-time college athletic operators they’re supposed to be.

It’s hard to identify a sea change in real time. Should Texas get back on a championship course, either this year or some time soon, then September 2018 was the month things finally clicked into gear.

How has Herman seemingly eliminated, or at least minimized, the drama that engulfed this program?

“Belief. Trust. Our players trust us and we trust them,” Herman said this week. “Winning on Saturdays certainly helps, but at times even last year that didn’t.

“I think, yeah, there’s a belief and a commitment and a buy-in into the way we do things,” he added. “Maybe the (team) leadership is so good, too, that it just doesn’t get to me or to you. It gets squashed before it ever gets started, which is by definition drama-free. It’s the players. It’s the players trusting each other, trusting us and believing and then walking that belief, not just talking about it.”

Strong endured three years of mediocre results and lots of drama. He put up with complete dysfunction behind the scenes. The 2016 Kansas loss … well, no Texas coach can recover from that.

Herman arrived in 2017, and the drama continued. A 7-6 season, more of the same, more frustration, disgruntled players. Then another season-opening loss to Maryland? Grrreat. Here we go again, headfirst into the “cesspool,” as ESPN’s Kirk Herbstreit once called it.

But the Tulsa win calmed everyone down. The USC win parted the clouds. TCU got walloped and it felt good to face your co-workers again. Kansas State looked like the inferior team, and Texas actually won in Manhattan, too.

Sure, winning helps. It’s more than that, seems to me. Maybe it’s because Texas finally has a deep quarterback room and some playmakers out wide. The offensive line has been stabilized, and the revolving door of offensive line coaches has stopped (for now).

You know the defense is going to show up week after week and make opponents earn it. Fans are truly excited to watch the youngsters grow and develop. This team is not a finished product, far from it, really. But you can sense real progress.

One of Herman’s best moves was to clamp down on leaks. The place was a sieve before his arrival. Now, it’s harder to get mundane team information. The big-time donors who had walk-in privileges under Brown got the message. You can come to practice, but that stuff better not show up on Orangebloods.

You’ll be hard-pressed these days to find a parent willing to publicly bash the coaching staff. Given recent years, that alone is an improvement. The sheer amount of gossip has gone down dramatically.

Off the field, fans have embraced athletic director Chris Del Conte and Bevo Boulevard. He’s a fundraising freak, and plans are moving ahead on a grand $175-million expansion of Royal-Memorial Stadium. There’s an overall sense that Texas President Gregory L. Fenves got this hire right.

Walk around before the next home game and soak up the atmosphere. Don’t like it? Just tweet at Del Conte, and he’ll respond posthaste.

Of course, this is Texas, so there’s always something to question. Why isn’t Keaontay Ingram getting more touches?  Who’s really calling the plays? Why can’t administrators keep Todd Orlando under house arrest to prevent him from leaving at some point?

Nitpicking the Longhorns is a rite of passage.

Things are going so well that Herman is stressing that players should be tightening their circle, not expanding it. Now’s not the time to let in outside voices. Every week this season, Herman has said “the only opinions that matter” are those of teammates, coaches and loved ones. It can sound condescending at first. What about the fans? Their voices don’t count?

“Don’t focus on the outside noise,” Beck said. “Not that it’s a change in what he’s told us, but I think how much we’ve bought into it has changed. We’ve really kind of focused on things in-house and really not paid attention to what’s going on the outside world, and that’s helped.”

This being Austin, there’s all kinds of outside noise. It’s simply gotten quieter with each passing week. Herman needs to keep it that way.

Golden: When it comes to comparing Texas and Oklahoma receivers, size matters

Bohls: Baker Mayfield’s out, Kyler Murray’s in … and Oklahoma may be better?