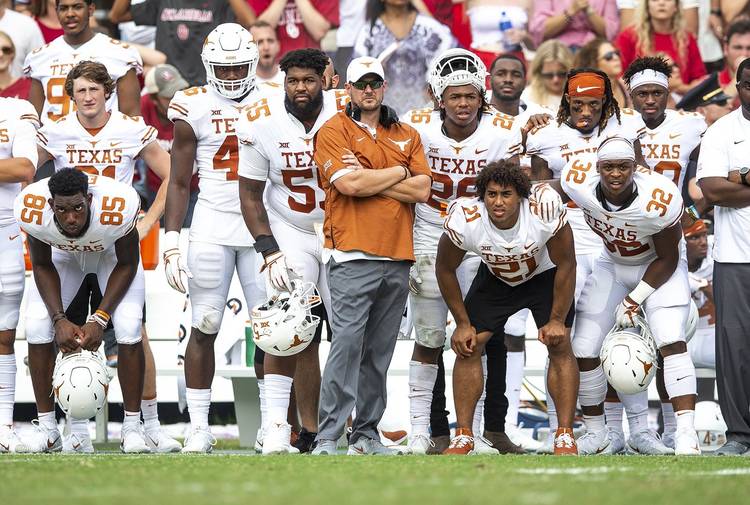 Derek Warehime came up with the idea.

A light bulb went off for the Texas tight ends coach as he was looking for a way to galvanize a potentially fractured football team. For sure, the fan base was broken.

Coaches have been coming up with gimmicks to motivate their players and give them a rallying cry forever. Miami’s got its gaudy Turnover Chain. Florida State employs a Turnover Backpack. Actually the whole turnover theme has gotten out of hand. Boise State’s got a Turnover Throne, Tennessee has a Turnover Trash Can, there’s Oregon State’s Turnover Chainsaw. Wish someone would take a chainsaw to these ploys. Even the WWE belts have grown tiresome. At least Virginia Tech uses a beat-up lunch pail.

Texas? It has poker chips.

That’s right. Texas, angry about being invisible this decade, has a king-sized chip on its shoulder, so why not poker chips?

“The genesis of the whole thing really stems from believing in yourself,” Warehime said. “The initial discussion was having the confidence to walk up to a poker table, push all your chips into the middle, step away from the table and put your cards down. Because you believe in yourself so passionately that nothing can get in the way. That’s what it all stems from.”

It sure resonated with the players, who haven’t folded since. And what has changed since Maryland?

“The biggest thing was the poker chips and being all in,” junior safety Brandon Jones said. “Being able to trust each other and really trust our training. The first game of the season, we kind of hesitated as a team and didn’t know what to expect, so from then on, we’ve just really trusted our abilities. The poker chip thing that coach Herman brought to us was a good thing to show. I guess it’s having a visual picture of being all in and taking his advice on that.”

And so Tom Herman had his schtick. It schtuck.

To maximize the experience, players are rewarded four black chips every Friday — one for each practice — for positives they show during the week. Effort plays. Big hits. Max preparation.

Come game day at the stadium, the players walk up to a shiny silver canister in the middle of the locker room and drop in their chips. One player, one cause. And after Texas took a knee on the final play to win four straight games and drove the length of the field before Cameron Dicker booted a game-winning field goal to beat Oklahoma, Herman entered the locker room, shared a message about buying in and then scattered the chips around the locker room while the players tossed them in the air in wild celebration.

This wasn’t Texas hold ‘em. It was Texas mold ‘em.

Herman needed some visual aid to latch onto after Maryland and the close game with Tulsa. So he gambled on Warehime’s brainstorm, and it caught on. What happened in Maryland stayed in Maryland.

“The biggest thing the chips have done for our team is provide a tangible example for everyone in the program to show they’re all in,” Herman said Thursday. “We tell the guys all the time, you don’t win games on Saturday, you win with your relentless preparation starting on Sunday. The chips represent the completion of that work week. When your chips go in the bucket on Saturday, you’re saying I’ve put in the work, I’m prepared and ready and I’m going to give everything I have for my teammates, these coaches and this team today.”

The best reason for that Maryland loss? The players were uptight. Pressing. Trying to be perfect.

So perfect, the Longhorns were almost run out of FedEx Field. A lower-tier Big Ten team in turmoil and with its head coach suspended, jumped out to a 24-7 lead. Although Texas rallied, scored 22 unanswered points and took the lead, an 86-minute rain delay and offensive misfires on three consecutive drives conspired to spell doom.

Two season-openers. Two embarrassing losses to a so-so Maryland team. Too many doubts.

And then a turnaround as Texas became the most improved team in college football.

A narrow win over Tulsa. A climactic, convincing victory over name brand USC. An impressive thumping of Texas-killer TCU to snap a four-game losing streak in the series. Beating Kansas State in the Bermuda Triangle that is Manhattan. And finally an eye-popping, decisive win over seventh-ranked Oklahoma.

What other magic did Herman pull to prompt a five-game win streak and a Top 10 ranking. What changed?

Nothing substantive, at least. But plenty changed in their mindset.

There were some changes and different points of emphasis. More running plays for Sam Ehlinger and more faith in him. Getting the ball to dynamic playmakers Collin Johnson and Lil’Jordan Humphrey. Using the middle of the field with Devin Duvernay and tight end Andrew Beck. More no-huddle. No more “merry-go-round in the offensive line,” offensive coordinator Tim Beck said of a healthy unit. Finding a clutch kicker in Dicker. Better ball security.

But mostly believing in themselves. An attitude shift.

Players all in. Playing all out.

“We put our chips all in and aren’t being afraid about it,” Beck said of the five-game win streak. “You earn your chips during the course of the week by the way we practice. Let it ride. If you put all your chips in, you can’t go back and take half of them back.”

Texas doesn’t want to. It’s upped the ante. And the result isn’t exactly poker-legal because, well, it’s had five of a kind.

Bohls: In need of relief, Texas went to Plan B — and B is for Buechele