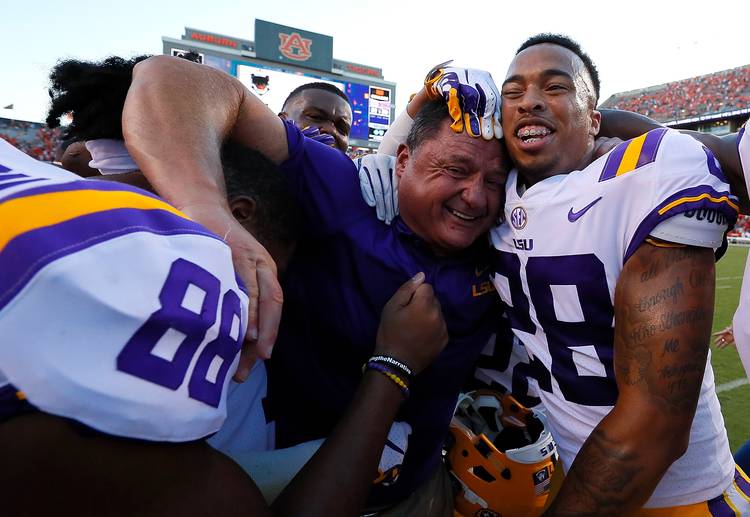 Head coach Ed Orgeron celebrates with Mannie Netherly #28 and Jacory Washington #88 after their 22-21 win over the Auburn Tigers at Jordan-Hare Stadium on September 15, 2018 in Auburn, Alabama. (Photo by Kevin C. Cox/Getty Images)

Texas coach Tom Herman hates to look beyond next week. So let’s skip ahead to next year.

The Longhorns’ 2019 schedule was finalized on Thursday by the Big 12 office. A cursory check reveals there are no Maryland Terrapins in sight, so things are already looking up.

From the looks of it, this schedule can be summed up in three words: Home, sweet home.

Four of the Longhorns’ first seven games are at Royal-Memorial Stadium. One of the road games will be against Rice at NRG Stadium in Houston, which will feel like a quasi-home game. And there’s the annual Red River Shootout against Oklahoma at the Cotton Bowl, which is half a home game anyway.

Goodness gracious. Might as well extend Bevo Boulevard up and down the interstate while we’re at it. That’s a whole lot of $5 beers. Don’t think athletic director Chris Del Conte won’t figure out a way to do it, either.

The only true road game out of UT’s first seven will be an Oct. 5 trip to West Virginia. Herman caught a break with that one, too. The average high temperature in Morgantown on Oct. 5 is 69 degrees compared to the low 50s in November, according to the National Weather Service.

If the Longhorns can’t build up a head of steam in September and October next season, then something has gone drastically wrong.

Herman hasn’t come straight out and blasted UT’s scheduling, but he wasn’t a big fan of opening against Maryland the last two years. Frankly, that went against UT’s history of scheduling a lower-level opponent in week one and then a tougher foe in week two.

“In the last 22 years, the University of Texas has played two road games to open the season, and one of them was a road game at NRG Stadium against Rice, and the other being the one at Notre Dame a few years back (in 2015),” Herman said before this year’s opener.

Texas was the only program in the nation that had played 11 Power Five opponents during the 12-game regular season from 2015-18. That streak will end next season.

Herman noted how difficult the schedule has been historically and said, “So it is what it is. I’m not complaining, certainly. We can’t change it, so we might as well figure out a way to do it.”

Actually, UT’s three non-conference game contracts were signed years ago, so there’s not much surprise there. Texas knew it would open against Louisiana Tech, LSU and Rice. Everything else is determined by the Big 12 office.

Texas will start league play at home against Oklahoma State on Sept. 21. Then comes the road trip to West Virginia and then it’s up to Dallas to face OU. The 2019 Red River game goes back to its typical second Saturday in October slot.

The next week, Texas comes back home to host Kansas on Oct. 19. Talk about catching a break. The Horns are 8-0 all-time against the Jayhawks in Austin and 14-2 altogether. Folks ’round here don’t talk about 1938 or 2016.

The flip side of all the home games is that the back half of the schedule is on the road. But it’s not exactly panic-inducing.

Texas plays at TCU on Oct. 26, then it’s back home to face Kansas State on Nov. 9 after a bye week. Wait? A bye week, and then another home game? Geez-louise.

The Longhorns are then back home on Black Friday for the regular-season finale. Texas Tech ruined the Black Friday matchup in 2017 and left Austin a 27-23 winner.

As of now, it looks unlikely Texas will play on Thanksgiving again anytime soon. With no natural opponent (i.e. no equal to Texas A&M), UT officials would rather enjoy the holiday with their families and come to work on Friday.

Judging from the rest of the Big 12 schedule, the league is just fine with that, too. The league scheduled the annual Bedlam Series game between Oklahoma-Oklahoma State on Saturday, Nov. 30. The guess here is the Big 12 would prefer that game to get glamor treatment that weekend.

The conference schedule is actually designed by a computer algorithm. Senior associate commissioner Tim Allen dumps all the information into the matrix, and it spits out several combinations. Some games are placed on specific weekends, like Texas-OU, but it’s generally a random selection.

The TV networks (ESPN and Fox) then examine the schedule and will stage a draft to pick what games they want. Everything else gets sorted out, and most game times are determined two weeks before kickoff.

The league office hopes to avoid getting a rematch in the Big 12 championship between two teams that played in late November. That’s determined by fate.

Make no mistake, if you hear anyone over in the Moncrief-Neuhaus Athletic Center complaining about this draw, just ignore it. The 2019 schedule favors Texas. Don’t let anyone tell you otherwise.

Just hush them up with one word: Maryland.

Golden: Texas had better learn from the near disaster against Baylor