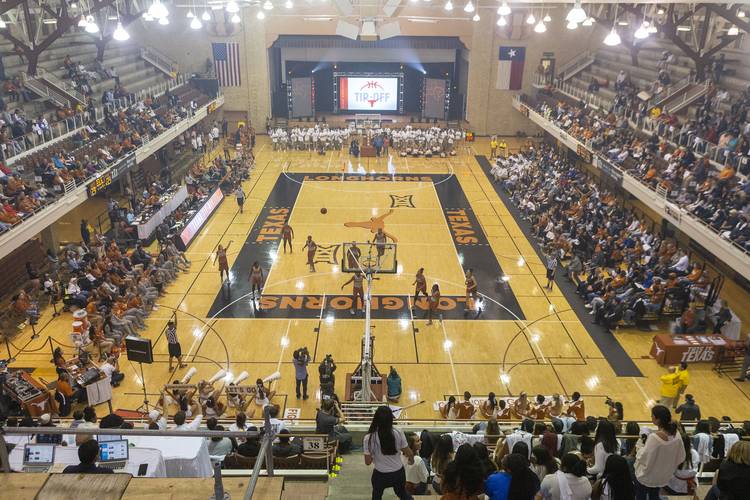 Bring hoops back to Gregory Gym.

We’re not talking about the four-on-four pickup games across the hall, but something along the lines of the NCAA variety witnessed by the estimated 1,000-plus that braved the weather to watch  the campus squads Wednesday night in the Texas Tip-off.

Our grandparents remember when they held the state basketball tournament  in UT’s 4,000-seat facility that’s right in the middle of the campus. That was back before the Erwin Center became the headquarters for the one of the biggest hoops showcases in the state each spring. These days, Gregory does a good business with the volleyball team but surely there’s room to stick a non-conference hoops game or two in there. The intimacy of the building could make for a real beehive.

Why not play a couple of games there, invite the students to attend at a cheaper price and fill up that place? Who knows, you just might get some non-basketball fans to consider showing up at the Erwin Center for the money games later in the season. It’s definitely something to consider mentioning to the walking suggestion box that doubles as Texas athletic director Chris Del Conte.

So I did just that.

“I would be open to the idea,” Del Conte said. “Anything we can do to accentuate the experience for our students and student-athetes, I’m all for it.”

The men wowed the crowd with a dunk contest that featured winner Royce Hamm Jr. throwing down power slams and newcomer Jaxson Hayes, who threw down a windmill one step inside the free throw line. Shaka Smart won’t be lacking in athleticism but will once again enter a season hoping his team can knock down enough perimeter shots to make some noise in the Big 12.

Senior guard Snoop Roach looked explosive after battling knee problems during the offseason. After going hard against his teammates in practice, he was ready to do it in front of the fans.

“It’s always different when you a have big crowd like that,” Roach said. “You have the freshmen out there playing in front of people they don’t know. You could see the nerves with Courtney (Ramey), Gerald (Liddell), Kamaka (Hepa) and down the line.”

As far as the venue, Smart said he enjoyed the change from the cavernous Erwin Center to get things started.

“People have floated the idea of playing a non-conference game over here,” he said. “I know there’s a lot of logistics that go into it with season tickets and everything, but I think it would be a lot of fun.”

The women’s team shared the Tip-Off stage with the men for the first time. Danni Williams, a sharp-shooting grad transfer from Texas A&M, nearly beat Matt Coleman in the three-point shootout. She gave us a glimpse of what life will be like for for the women now that backcourt stalwarts Brooke McCarty and Ariel Atkins have moved on.

The early returns have the women holding the edge in outside shooting but the men being deeper, especially with Texas missing forward Joyner Holmes and post Sedona Prince.

This was the first year the women were included in the Tipoff and the fans really got into the battle of the sexes and the scrimmages. Coach Karen Aston said both teams had fun doing trash talking about the three-point shooting competition. The men had the last laugh, but it should be mentioned that Williams lost in sudden death partly due to not shooting from the wing. The shots were taken from the top of the key, easily Coleman’s favorite spot.

“A couple of years ago we did an exhibition game here that I actually loved,” Aston said. “I thought it was a great way of showcasing our team in a different environment. Sometimes we go to places that aren’t as big as the Erwin Center.  Anything for us to be able get the student body in front of  our young women is a good idea.”

Wednesday provided a taste of what would be a couple of cool events come the regular season.

Eyes on Texas: No Maryland? Then no problems on the 2019 schedule, right?

Bohls: To play Sam Ehlinger or to sit him? That’s the question facing Tom Herman