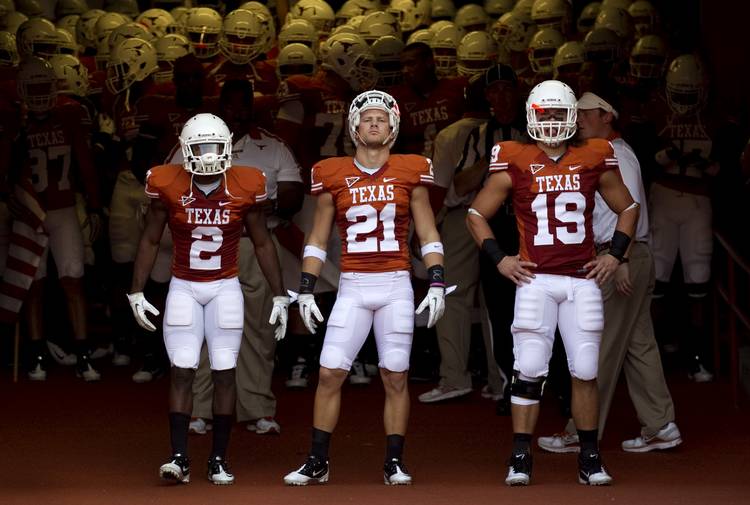 Blake Gideon (21) was a four-time All-Big 12 safety for the Texas Longhorns and a two-time team captain. (Photo by Jay Janner/American-Statesman)

Sam Ehlinger has never been to Lubbock. He’s heard a lot about it, though, and can’t wait for Saturday night at Jones AT&T Stadium.

Ugh, and that finish. Michael Crabtree’s 28-yard touchdown catch while tip-toeing down the sideline turned that game into an instant classic. The Red Raiders knocked off the No. 1-ranked Longhorns 39-33, which eventually denied Texas a shot at making the national championship game.

“Oh, it was tragic,” Ehlinger said.

In Lubbock, it’s called simply the “Crabtree game” or the “Crabtree catch.” It’s one of the biggest plays and biggest wins in Tech football history. Texas fans remember the ending far different.

Over in Atlanta, so does Blake Gideon.

Back in 2008, Gideon was a freshman  safety on a veteran Texas team. Ten years later, he’s coaching cornerbacks at Georgia State. He doesn’t think much about the final few seconds that November night.

“I’m not tossing and turning in bed,” Gideon said in a phone interview with the American-Statesman. Nor should he. There were dozens of other ways the Longhorns could have won that night, as coach Mack Brown said several times afterward.

“It is a double-edged sword, right?” Gideon said. “You preach one play doesn’t win or lose the game. But, there are big plays.”

Yes, Texas fans, he knows. That dropped interception with 8 seconds left was a big one.

Brown’s Longhorns were 8-0 when they boarded that flight for the South Plains. ESPN’s “College GameDay” shipped out to Lubbock, too. Tech was ranked sixth. With games left against Baylor, Kansas and Texas A&M, this was realistically Texas’ last major hurdle of the regular season.

On the Saturday morning broadcast, Tech basketball coach Bob Knight sat on the stage and told the ESPN hosts, “I deeply hope we beat their ass today.”

As Ehlinger will soon discover, life’s a little different in the Hub City.

“There were a lot of places you went back in those days of Texas football, there were just as many Texas fans in that town as the home team fans. Except when you went to Lubbock or College Station,” Gideon said. “Lubbock, there was nobody that was fired up about the Longhorns out there.

“You did kind of have that feel, from the hotel as soon as you got there, the police officers that are escorting you, they’re not necessarily smiling at you. That was kind of the feel of the whole thing.”

Fortunately, the Longhorns had Colt McCoy at quarterback and Jordan Shipley out wide. Earl Thomas, a future NFL star, played alongside Gideon in the defensive backfield. The Horns averaged 42.4 points per game that season, but their secondary was among one of the worst statistical units in the nation.

And Tech quarterback Graham Harrell of Ennis had a field day.

Things didn’t start well. The Horns were pinned deep on their first possession and gave up a safety. The Raiders had jumped out to a 19-0 lead and then stretched it out to 22-3 before Hunter Lawrence’s 25-yard field goal just before halftime.

Brown got his troops moving in the second half. McCoy threw a 45-yard touchdown pass to Shipley, then Malcolm Williams caught two touchdowns (37 and 91 yards). Vondrell McGee punched it in from 4 yards out with 1:29 remaining, and Texas led 33-32. The Longhorns simply had to make one stop. Sound familiar?

The Red Raiders returned the kickoff to their 38, and after Harrell connected on short passes of 8, 5, 11 and 10 yards, Tech was facing first-and-10 from Texas’ 28-yard line with only 15 seconds left. He rolled to his left and fired a tough pass to Edward Britton. The ball hit Britton’s hand and bounced high into the air. It was headed straight toward Gideon.

“No, they’re calling it incomplete!” Jensen then exclaimed in can’t-believe-it-fashion.

Gideon appeared to make a sliding interception, corralling the ball near his stomach as he rolled onto the turf. To the naked eye, it was an easy play. Even on the ABC telecast, announcer Brent Musburger said, “I thought for sure that he had deflected it to Gideon.”

But the ball hit the turf and was ruled incomplete. On the next play, Crabtree scored. Game over. And so was UT’s shot at a national title.

Texas fell from No. 1 to No. 4 in the Bowl Championship Series rankings the following week. The Horns got back up to No. 2 but then got leapfrogged by the Sooners at the end of November despite Texas’ win in the head-to-head matchup. The Sooners, Longhorns and Red Raiders all finished tied atop the Big 12 Southern Division with 7-1 league marks. Texas had beaten Oklahoma, Oklahoma had beaten Texas Tech and Texas Tech had beaten Texas, and the conference had to go to a fifth tiebreaker — the higher BCS ranking — to settle things. Texas was 11-1 and then beat 10th-ranked Ohio State in the Fiesta Bowl. Oklahoma fell to Florida in the BCS national championship game.

Gideon was the Longhorns’ third-leading tackler that season. He finished with eight quarterback hurries, seven pass breakups and one forced fumble. He had nine tackles, one breakup and one hurry that night in Lubbock.

“Yeah, as a competitor, it’s hard for that to not bother you,” Gideon said. “Anytime you felt like you were that close, and there was something you could’ve done in particular to give yourselves a better chance to win. Yeah, that does bother you. And it did bother me just as a competitor.

“I’d be mad at myself for what that meant for my teammates,” he added. “That was the thing that was so unique about those teams that I was a part of. We fought so hard for one another. We didn’t want to let each other down. That could’ve made it a lot harder if my teammates would’ve given up on me, I guess you could say. There was never even a hint of that.

“Hey, it is what it is. It wasn’t a fun Sunday after that loss. But we still had games to play, and we knew we had a lot to play for still.”

‘No one play lost the game’

Gideon’s miscue is similar to that of Craig Curry’s in the 1984 Cotton Bowl, but Gideon never felt fans’ wrath the way Curry did.

Curry, a safety who had never returned punts before, was sent into the fray and tried to make a fair catch late in the fourth quarter. He couldn’t, Georgia pounced on the turnover and it was the key moment in the Bulldogs’ 10-9 win. That mistake also kept previously unbeaten Texas from winning the national title.

In 2005, Curry finally agreed to sit for an interview. He told the Dallas Morning News about “that thing” that kept him from alumni functions, UT events and basically drove him into hiding.

With Gideon, the Horns were proactive. In 2009, then-defensive coordinator Will Muschamp downplayed the significance of Gideon’s drop. “No one play lost the game,” Muschamp said. “Anyone who thinks that has never been an athlete, has never competed.”

Even then-Tech coach Mike Leach deflected some heat. “It’s always interesting to me that they highlight that play because I can probably rattle off 10 other things that would have allowed us to win by more,” he said in 2009. “So I don’t see that as particularly significant.”

If Thomas doesn’t take a bad angle on Crabtree’s final touchdown catch or if Curtis Brown gets Crabtree out of bounds, then Texas escapes. If the Horns hadn’t fallen behind early — if this, if that. It can go on and on.

Thomas, a six-time NFL Pro Bowler, went on to win a Super Bowl with the Seattle Seahawks. Crabtree, a two-time Biletnikoff Award winner, is in his 10th NFL season now with the Baltimore Ravens. Harrell, after a five-year pro career, spent two years on Leach’s Washington State staff and now is North Texas’ offensive coordinator.

Texas officials didn’t let Gideon speak to reporters again until the Horns had reached the Fiesta Bowl — when all starters were required to be made available to the media.

“When people were rushing away from Colt and Shipley’s table to come over to ask me questions, I knew pretty quick what the deal was,” Gideon recalled. “It didn’t bother me. I knew people wanted to know.

“They want to know about the situation and what went on and how I deal with it and how the team was. I get that, and that’s fine,” he added. “As much as we want to act like we live in this utopian society as a team, that’s not always how it works. If there’s a story to be told, I get it. People want answers to questions. That didn’t bother me. I understood that.”

That one play did not define Gideon’s Texas career.

“I was mad at myself, and the only thing that saved my immature mind at that time was I had a lot of great teammates around me,” Gideon said. “That can’t be understated, that those guys didn’t allow me to be that selfish to put that all on me.”

He was an honorable mention All-Big 12 pick four straight years and twice named a team captain. Gideon played for the Arizona Cardinals and Denver Broncos before retiring in 2013 and getting into coaching.

He’s now engaged to a Southern Tennessee girl. Blake and Mary Catherine are set to be married on July 6 in Nashville. “I fooled her into meeting up with me, and I guess I’ve been fooling her ever since,” Gideon said.

Having grown up in Leander, played at Texas and the NFL, Gideon has plenty of football and life lessons to pull from while coaching at Georgia State. Obviously, the biggest one is reacting to big moments, big plays.

You are never defined by what happens in life, really. It’s how you react that makes the difference.

“I came to Texas because it’s important,” Gideon said. “It’s more important at Texas than a lot of places. Each and every play means more. Your performance means more. That’s part of it. I’m glad I was at a place where it meant that much, and it wasn’t just something that floated off into the breeze.”