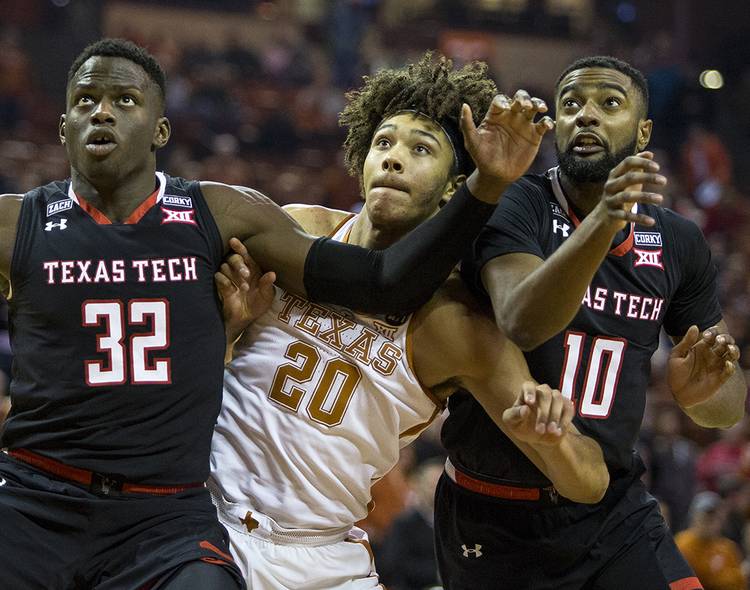 Three games into the season, the Texas men are getting nice production from high-flying freshman forward Jaxson Hayes.

Hayes says he has toughened up his game by going up against forwards Jericho Sims, Dylan Osetkowski and Royce Hamm during the offseason. Sims was his toughest matchup.

“Jericho really dominated me over the summer.” Hayes said. “Playing against him helped me a ton. I learned how to play against him and the other guys without fouling. Those are physical guys. That will help prepare me for the Big 12.”

A case can be made that Hayes is giving the Longhorns (3-0) more of an offensive spark than Sims, who has struggled out of the gate in two of his three games. He scored 14 points and grabbed five rebounds against Arkansas but has been up and down in the other two games, where he has produced only eight points and 10 rebounds in 34 minutes of action.

After some nice flashes down the stretch of his freshman season,  Sims was expected to take on a heavier workload on the offensive end but is suffering from the same malaise that has plagued so many other players at his position. While Hayes has raised some eyebrows with his finishes at the bucket and natural ability to block shots that evokes memories of former UT big man Prince Ibeh, Sims — a fellow high flyer — has been slow out of the gate.

So why the slow start?

“I think the first thing, he and (point guard Matt Coleman), I would put in a similar category,” coach Shaka Smart said. “They’re sophomores who came came in with a higher level of expectation than maybe they had when they first got here. They had great moments when they first got here. As players we’ve coached over the years have learned, it doesn’t just happen. You still have to make it happen on the floor.”

And it will happen eventually because like Smart later said, Sims and Coleman put in the work in the offseason. Once things click, the Horns will become even more balanced. The offense may come and go, but Sims will always be a natural shot blocker and rebounder who can impact games with sheer athleticism.

It’s something we’re already seeing from the 6-foot-11, 220-pound Hayes, who’s averaging 8.3 points, 5.7 rebounds and more than two blocks so far. He’s rangy and explosive with a suddenness at the bucket that has already gotten several oohs and aahs from fans.

“He’s a gem that needs to continue to need to be polished,” Smart said. “He has a good work ethic, he runs fast and he’s willing to stick his nose in the play. I think his football background comes into play there. He has a ton of upside. It’s just a matter of how he learns how to handle all the physicality that’s coming his way.”

The son of former NFL tight end Jonathan Hayes is doing it primarily with athleticism; he played only six minutes a game as a junior in high school in Ohio. He didn’t even play AAU ball until his junior year. He said he grew five inches between his junior and senior seasons, which of course got recruiters even more interested.

Hayes loves this chilly weather we’re having because it reminds him of home. He talks to his folks four or five times a week as he adjusts to the college life.

“The biggest adjustment has been adjusting to all the travel and not being around my family,” he said. “I miss them a ton.”

The maturation will come, both in his day-to-day existence as a college students many miles away from home and as a player who Smart said before the season won’t be a well-kept secret for much longer, especially if the start to his career is any indication.

Growing pains are part of the process, not just for Hayes but also for Sims.

Bohls: Texas, with all its offensive points and defensive issues, sure passes for a Big 12 team

Eyes on Texas: Once red-hot, Todd Orlando’s defense now has fans hot under the collar