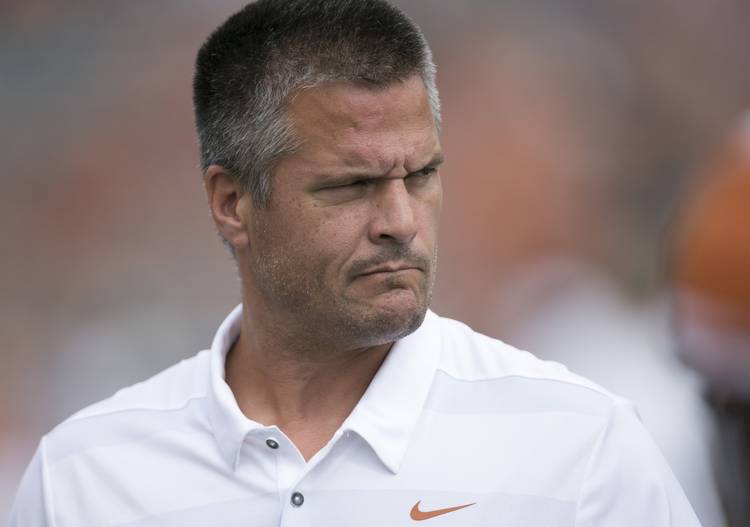 Remember when Texas defensive coordinator Todd Orlando was labeled the red-hot assistant that would soon become a head coach? What’s Tom Herman going to do without Orlando in 2019, who will replace T.O. or some such?

That was late September, I believe.

Suddenly, it’s OK to question Orlando’s philosophies about defensive alignment, personnel choices and generally whether he should be allowed back into Moncrief. Why would Herman keep this guy in 2019, who should replace T.O. or some such?

Fortunes, reputations and win-loss records sure change fast around the Big 12. For his part, Orlando is well aware his defense has been “on the ropes a little bit.” This week, the Horns took a back-to-basics approach as the defensive coaches stuck to the same message as before: Keep swinging.

Stop me if you’ve heard this before: Expect a shootout Saturday at Royal-Memorial Stadium.

“I know this: If I’m backed up into a corner, I’m not curling up. I’m not tapping out,” Orlando said. “You’re going to get more and more punches at you, and we’re going to fight our way out of this thing. Keep swinging, because you’re eventually going to land one.”

The first words out of Orlando’s mouth when he met with reporters on Wednesday to discuss the Texas Tech win? “Tackling was bad.”

Normally at this time of year, coaches are letting off the gas at practice. But Orlando went to Herman and asked to wear full pads Tuesday just so the players could do tackling drills. The defense allowed a season-high 595 yards against Tech. That’s in addition to generating three turnovers and a fourth on downs.

“It was disappointing. Absolutely,” Orlando said. Players were taking back angles or catching ball-carriers as opposed to delivering the first strike, he said. “That’s not us. We’ve got to get that cleaned up, because that’s on film until the planet blows up. That’s an indictment on myself as a coach and everyone who was on that field.”

The Horns sacked quarterback Jett Duffey four times but allowed the Red Raiders to convert 10 of 15 third-down opportunities. That’s the mark of a defense practically begging to lose. And it continues a troubling trend. The defense simply can’t get off the field. Oklahoma State (10 for 20) and West Virginia (7 for 12) were both over 50 percent on their third-down chances. For the season, opponents have converted 43.3 percent on third downs against Texas, the second-highest total in the league.

“We’ve got to address third down,” Orlando said. “It’s as bad as I’ve been associated with. We’ve got to try new things, we have to do different things until we get it resolved. That’s where we’re at right now.”

How did Texas get here? Injuries have played a sizable role.

One problem has been Brandon Jones’ ankle injury. He’s missed the last two games after aggravating it at the team hotel the morning of the West Virginia game. Cornerback Davante Davis is also playing through multiple injuries. Safety Caden Sterns had a blazing start to the season but has since cooled off.

The Longhorns have snagged only one interception in the last three games, a dying quail to Davis that Duffey turned loose under pressure.

Texas has gotten sub-par play from its veteran linebackers. It’s far more than just Jeffrey McCulloch hesitating, stepping inside and not darting out wide on West Virginia’s game-winning, two-point conversion. Gary Johnson’s activity level has been up and down. Anthony Wheeler has also been caught out of position at times.

Charles Omenihu has looked like a first-team All-Big 12 defensive end. Chris Nelson generated some belly-rubbing excitement in October. But they’ve had some difficult weeks lately. Breckyn Hager’s been slowed by an elbow injury. He’s got two regular-season games left to make an impact.

This defense, like the offense, is not deep. Don’t expect Orlando to make wholesale personnel changes, mostly because the Longhorns can’t. That can only be addressed through recruiting.

The players who have been out there the last few weeks will be the ones fans will see against Iowa State and Kansas. It’s Orlando’s job to make sure the Horns keep swinging.

“We’ve told you guys before as a rite of passage to get on this defense, you better be a tough guy,” Orlando said.

Or, at least tough enough to handle the stress.

Bohls: Texas’ Jerrod Heard will be remembered as a ‘good soul’ and terrific leader