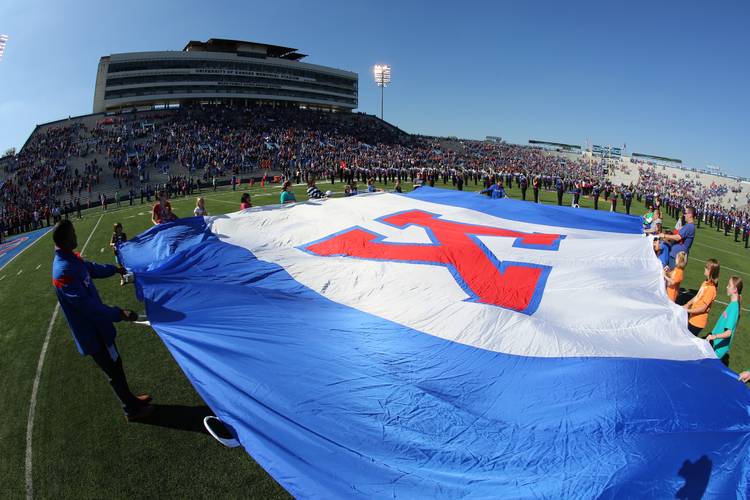 The Texas Longhorns are about to return to the scene of the crime. Two years after losing at Kansas, former coach Charlie Strong's fate was sealed. Texas returns to Memorial Stadium on Friday. (Ed Zurga/Getty Images)

It’s Thanksgiving week. Time for the turkey and all the trimmings. You can catch the Macy’s Day parade in chilly New York on the tube. Put some logs in the fireplace and snuggle. Crack open an adult beverage or two. Go back for seconds.

It’s the holiday season, and nothing screams the Thanksgiving season quite so much as …

Come again. Are you kidding me?

The Longhorns are playing where on Friday? In Lawrence? Dorothy, looks like we are in Kansas.

That’s right. Make way for a new tradition and say goodbye to an old, revered one.

We have long been accustomed to seeing the Longhorns on the road this week every other year, but only 100 miles or so up the road with a mandatory stop at Buc-ee’s for chocolate almonds on the way to College Station. But no. Not anymore.

With Texas A&M’s exit to the SEC, Texas had to find a new Thanksgiving rival. It did so with Texas Tech and TCU in alternating years, and the vibe was … well, not so much. Baylor was once discussed, too.

Those games with Tech and TCU drew no attention nationally and little fanfare even locally. There was little if any buzz. But that was pre-Bevo Boulevard and pre-Tom Herman. Of course, it didn’t help that Texas hasn’t been very good since the last real Turkey Day or Turkey Day Plus One matchup in 2011 until this season.

Justin Tucker kicked the Aggies on their way out the Big 12’s door, and we’re left to pick up the pieces.

A&M at least meets up with LSU on Saturday, which has some pizzazz. Texas, on the other hand, faces lowly 3-8 Kansas with a lame-duck coach. But it’s not a lame game. This year, the Longhorns have everything on the line.

A shot at nine wins. An opportunity to seize a spot in the Big 12 championship game. National relevance, given Texas’ 14th spot in this week’s CFP rankings. A chance to have a meet-and-greet with the Mad Hatter. Curious if they’ll serve grass in the David Booth Kansas Memorial Stadium press box.

But how did we get here? How in the name of Earl Campbell does Texas find itself in the blustery Midwest this holiday season?

Texas let it happen. That’s how.

Texas’ then-athletic director Mike Perrin said yes to the Big 12’s offer of a playdate somewhere besides Austin and did so out of the goodness of his very good heart. I’m serious.

He did it for family. Not his. But for those families of the 5,000 or so game management folks who work on game days at Royal-Memorial Stadium. Ushers. Vendors. Ticket-takers. Security folks. Cleanup crew. Medical staff. Bevo scoopers. You name it.

For decades, it worked out nicely because one year they’d be working an Aggies game, and the next they’d be home carving up a bird with the game in College Station.

“Back in the old days when you and I grew up, we were here one year and at A&M the next,” Perrin said Wednesday. “That worked out well. But certainly I was concerned about the fact we had a lot of very dedicated employees in the department who had not had a Thanksgiving with their family for many, many years after 2011.”

Perrin’s heart was in a good place even though the Longhorns now have to be in a place far, far away.

“Someone came to me and said they had a child who was a junior in high school and they hadn’t had a family Thanksgiving in years,” Perrin said. “That was a personal factor that resonated.”

Of course, a lot of scheduling changes occurred. The Bedlam series pitting Oklahoma and Oklahoma State got moved up to possibly avoid a rematch a week later in the Big 12 title game. Instead, OU and West Virginia face off Friday and there’s still a remote possibility those two could meet in Morgantown this week and in Arlington the next.

Texas will always protect its October date with the Sooners, so as to keep Breckyn Hager engaged and embrace history.

“I don’t want that (October date) to ever change,” Perrin said.

Yeah, but if Jerry Jones gets his hand on a Texas-OU rematch at AT&T Stadium next week, you know he’ll want it every year. Heck, he’ll probably even roll in Big Tex and a Ferris wheel on the stadium grounds. I still prefer the Cotton Bowl for the traditional October slugfest, but anything is better than home-and-home for that rivalry.

Perrin has attended all the Texas home games this year except for the West Virginia game because he was recuperating from knee replacement surgery. He won’t be in Lawrence, which may be for the best since that was the scene of Charlie Strong’s fateful loss in 2016.

“That was quite a momentous game,” Perrin recalled. “It was not a pleasant evening.”

There’s just as much on the line this go-around, but this time the Longhorns’ coach is hunting a championship, not another job. This is a tradition Texas hopes to repeat.

Next year, however, Texas will be home for the holidays. Texas Tech comes to town Thanksgiving week.

Bohls: Texas’ Tom Herman deserves a B-plus grade this season — with a chance for extra credit