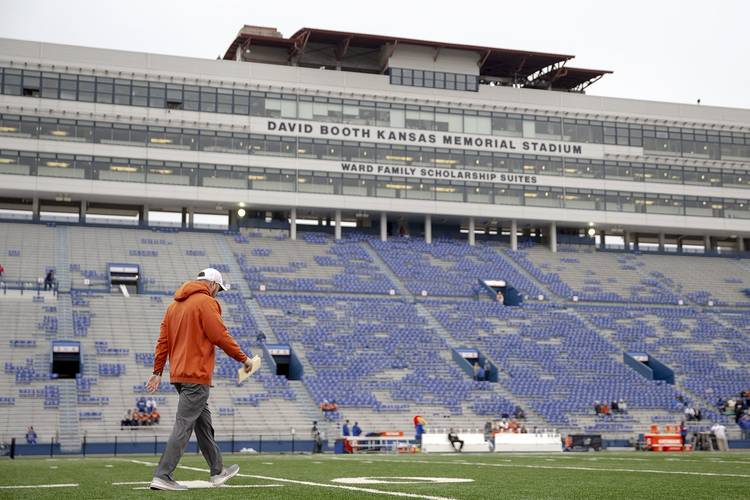 When Tom Herman expressed his opinion a couple of weeks ago that he thought his Texas football team has “overachieved” this season, ears perked up.

When he mentioned it again in last Friday’s post-game press conference after the Longhorns had held off Kansas to clinch a spot in the Big 12 championship game, the wheels began to turn for curious minds.

Not sure a team that was picked to finish fourth in a league and finishes second overachieved all that much. But some, maybe.

Texas Tech’s Kliff Kingsbury, TCU’s Gary Patterson and Kansas State’s Bill Snyder, not so much, although Kingsbury was down to his third-string quarterback and Patterson had enough injuries to fill a hospital ward.

On the other hand, Herman said, “I would say we’re probably ahead of schedule with one real full-cycle recruiting class under our belt and playing on the field right now.”

He definitely has a point there. It might be easier to overachieve next year with eight defensive starters graduating, three senior offensive linemen and the tight end leaving, one of the two best running backs heading out the door and the possibility of Texas’ top two receivers bolting for the NFL.

In August, I had Texas pegged as an 8-4 team, not all that far off from the 9-3 record the Longhorns achieved. But I did not project them as possible Big 12 champions.

He was asked about overachieving during Monday’s press conference, setting off the week of Armageddon II when Texas and Oklahoma square off for the second time this same season.

Of course, it’s hard for any Texas coach to say with a straight face that he or she has overachieved, regardless of the sport. Eyes roll around the Big 12 and beyond whenever any Longhorn says that.

After all, what possible resource advantage does Texas has?

Other than decades of winning tradition, virtually Vatican-like resources with one of the top budgets in all of college sports, a rich history, the top education available, and the city of Austin to recruit to, etc.? And we didn’t even mention Barton Springs, the Hike and Bike Trail or Franklin’s.

But Herman has embraced the overachieving concept and is running downhill with it.

He went on, reciting pertinent stats.

“We’ve had 21 10-or-more-play drives that have resulted in scores. That’s good for fifth in the country. So we’re controlling the football on offense to make up for some talent discrepancies.”

And therein lies the reasoning behind Herman’s claim. He doesn’t see his talent on a par with — presumably — Oklahoma and maybe other teams. I’m not sure I’d agree with him.

Herman said he nominated a bunch of his players for first-team All-Big 12, but asked reporters “how many true, no-brainer, first-team all-conference guys do we have on our team? You would like to think the two wideouts (Lil’Jordan Humphrey and Collin Johnson), but it’s difficult to be the first-team wide receiver. Maybe Charles (Omenihu)? Our quarterback is having a historic year, but is he going to be first-team all-conference? Probably not.”

He has a point, but it’s not a huge dropoff from Kyler Murray to Sam Ehlinger. Omenihu will be first team. Humphrey and Johnson can hold their own with any other Big 12 receiver, including Oklahoma’s Marquise Brown, Texas Tech’s Antoine Wesley, Oklahoma State’s Tylan Wallace and all those West Virginia ends. Cornerback Kris Boyd or safety Brandon Jones might make it. So might tackle Calvin Anderson.

And, by his definition, they’re overachieving. Or at the minimum, achieving a helluva lot.

Bohls: A Big 12 championship game? No thanks. Who really needs a 13th data point, anyway?