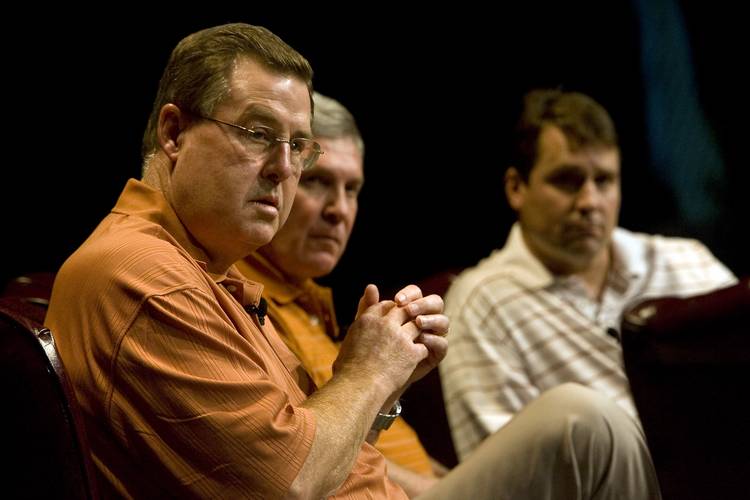 He thinks back, reflecting on his 13 seasons at Texas, and finally says he has two favorite Texas-OU football moments.

Greg Davis won’t ever forget Major Applewhite’s 97-yard touchdown pass to Wane McGarity out of his own end zone in 1998. “That was special,” Mack Brown’s longtime offensive coordinator said this week.

Then there was the diminutive Hodges Mitchell going for two bills with 204 yards on 30 carries against the Sooners in 1999. “We were able to dominate the line of scrimmage,” Davis said.

But he couldn’t leave out the day Jordan Shipley went wild, catching something like 11 balls and returning a kickoff for a game-altering touchdown to help Texas down Oklahoma 45-35 in 2008. That was one of six UT wins in Davis’ 13 games versus the Sooners.

Oh, the memories flood back for the 67-year-old Davis, even as time slips away. He hasn’t been with the Longhorns since 2010. But he still has a connection with Texas and with this year’s Longhorns-Sooners extravaganza as well.

Texas coach Tom Herman hired Davis as a paid consultant this season, mining his expertise for a week during training camp in August and again the week of the regular-season matchup with the Sooners.

“Greg Davis has been a longtime mentor and friend, whose opinion I value greatly,” Herman said. “I can’t thank him enough for all of his wisdom and support for many years. This year he’s been an excellent resource on programwide enhancement, and I’m truly grateful to have that.”

Davis has also worked for Applewhite’s Houston Cougars both this season and last and has observed maybe 25 practices this fall.

He’s talked to Applewhite frequently since the Cougars’ loss to Memphis last week and kidded him that “it’s not a good thing to get your starting quarterback hurt.” Davis has been totally impressed with junior D’Eriq King, who was lost for the season the week before with a knee injury.

“He was responsible for 50 TDs. He was leading the FBS with TD responsibility,” Davis said of King. “He’s not Kyler (Murray), but he’s a poor man’s Kyler.”

“Todd called me and asked me to get on the computer and pull up his quarterback and tell him what I thought,” Davis said. “I said I think the guy’s pretty good. I’ve never seen a quarterback with his butt and thighs. He’s stout. He asked if I thought he was Division I quality, and I said absolutely. He’s such an instinctive runner. And he always makes the first person miss.”

Davis has also worked with coaching staffs at Iowa State, Florida and North Dakota State. And he loved his time with Herman.

He sat in on offensive staff meetings.

He watched the two-minute drill and answered Herman’s questions about the use of timeouts.

He helped the staff brainstorm about situational football. Like the Horns having the ball on their own 2, facing fourth down with a one-point lead and four seconds to play. Do you throw it deep out of the shotgun or do you trust the punter?

“I’ve got a check list of things, two or three pages long,” he said. “We timed it over and over when I was coaching, and it was always about five seconds or more.”

He watches every UT game. On the television and again the coaches’ copy on his iPad. He scribbles down notes, and “if there’s something I think is worth mentioning, I will. It’s very brief.”

In an hourlong conversation, Davis constantly devalued his input and any significant contributions, but when pressed, he did mention Texas switching from its usual weak-side post route on a flood route play to a back-side square-in. The play worked twice against OU in October, and Herman thanked him in a postgame text.

“Please don’t make me out to be any hero or anything,” said Davis, maybe the most humble coach I’ve covered. “I’m just helping a friend. I’m just the old grandpa sitting in a corner of the room.”

This grandpa is rooting for the Longhorns, especially in such a rivalry game filled with so many special memories, not that they all worked.

He does recalled an OU moment when the Longhorns had worked on a trick play all season and unveiled it in the Cotton Bowl.

Down near the Sooners’ end zone, Davis called a fake power. Roy Miller, the Longhorns’ star defensive tackle, slipped into the flat all alone, not a defender nearby. He’d caught the pass like a tight end in practices all fall, caught ’em so well “you couldn’t hear the ball hit his hands.”

But that Saturday in October of 2008, “Roy slapped that thing down like a volleyball, and I thought we’d better get that thing in on second down. On the next play, Roy destroyed his man, and we walked into the end zone,” Davis said, noting Cody Johnson ran it in to bail them both out. “Roy took care of that drop.”

And what did Mack say after the Miller drop?

“He didn’t say anything you could print,” Davis said.

Golden: Texas seniors know a sweep of Oklahoma will cement this program’s turnaround

Eyes on Texas: UT’s moment to reassert itself, rearrange the Big 12 pecking order has arrived