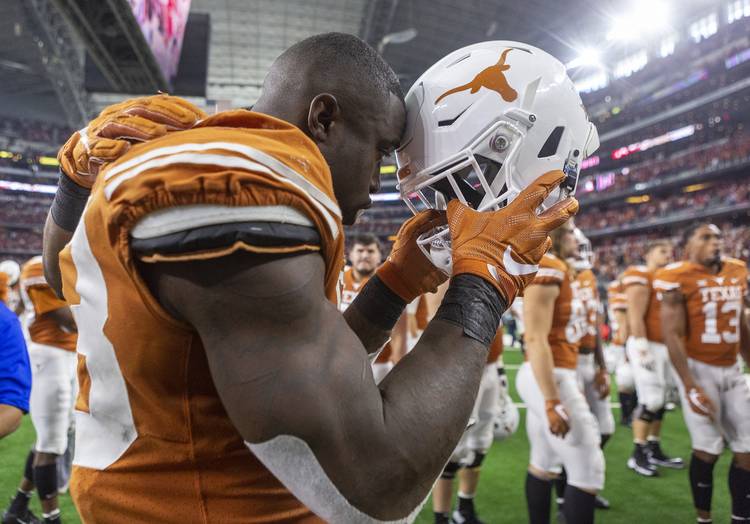 And then the Sooners turned the Horns down.

After the last of the multi-colored confetti had blown toward the ceiling of AT&T Stadium and the last celebratory statement had been uttered, even new OU president James Gallogly was seen throwing a Horns Down before he disappeared up the tunnel.

Some things just can’t be helped.

Sooner or later, form inevitably holds. It did once again on Saturday, with the Sooners roaring back from a slow start with a 21-point barrage and all the momentous plays in the fourth quarter for their, what, 12th Big 12 title and their unprecedented fourth year in a row. Doesn’t it seem like OU wins this thing every year?

What was reinforced for Texas in October at Fair Park in Dallas amidst an impressive, six-game win streak became unraveled down I-30 in a gut-punching, 39-27 loss to fifth-ranked Oklahoma on the fringe of the College Football Playoff conversation. Even OU’s ugly defense showed up, looking pretty with three fourth-quarter stops on a punt, a safety and an interception.

Texas lost because of too many penalties. Way too many. Thirteen, in total.

Texas lost because of too little pressure on Kyler Murray. Way too little sacks. Two, in all.

“I echo those sentiments,” a dejected Tom Herman said.

And the Todd Orlando defense that had played fitfully the last half of the season finally cratered under the stress of matching up with a legitimate Heisman candidate. Murray didn’t throw his hat but kept it — or his helmet — in the ring after guiding the Sooners to 21 straight points and serious momentum, even without star receiver Marquise Brown, who went down at the end of the third quarter with a leg or foot injury.

OU, of course, remains very securely at the top, running the table after dropping that October grudge match to Texas by three in the Cotton Bowl and winning its seventh consecutive game. What else is new? The Boomers have won 34 of their last 36 games against Big 12 teams, losing to Iowa State last year and to Texas in October. Sheer dominance.

While OU has 12 Big 12 titles, Texas is second with three. A distant second.

But, the Longhorns have closed the gap significantly.

They won the first matchup and were in control for most of the first half in this re-do. In fact, the two teams were deadlocked at 27-27 entering the fourth quarter.

That’s when big-time teams make big-time plays, and OU made almost all of them.

Just when it appeared Texas linebacker Gary Johnson made the play of the game by chasing down OU receiver CeeDee Lamb at the end of a 54-yard catch-and-run and poking out the ball for a fumble recovered by the Horns, just as quickly, the Sooners returned the favor when Tre Brown came on a rare corner blitz and decked UT quarterback Sam Ehlinger for a game-altering safety.

Following the ensuing kickoff, OU marched 75 yards, and Sooners tight end Grant Calcaterra with a one-handed grab cradled his second touchdown pass of the day for the eventual margin.

All that remained were more Texas penalties, OU players racing around the field with their Horns Down, Murray carrying the oversized OU banner and a whole lot of angst from the Longhorns locker room.

It won’t settle in for a while, but Texas should take a lot of solace in finishing second to an OU team that belongs in the Final Four. A 9-4 season represents king-sized progress for a program that’s been dead in the water for almost a decade.

Texas has the makings of a solid Big 12 frontrunner next season behind a magical quarterback, outstanding junior receivers like Collin Johnson — who put on a record-breaking show with 177 yards — and Lil’Jordan Humphrey if they come back, plus a well-stocked secondary enhanced by junior safety Brandon Jones’ announcement that he will return to school. Asked if he’s returning, Humphrey said, “We’ll see.”

But on this day, they weren’t enough.

OU was better. Texas was good but undisciplined in the penalty department and unsettled on defense with a three-man front and poorly timed blitzes that were both unproductive. And 27 points rarely get you a Big 12 win.

“That was a helluva football game,” Big 12 commissioner Bob Bowlsby said. “One for the ages. I think Tom Herman did a great job with his staff and team. Nine wins, that’s a lot of wins.”

But Texas needed a 10th to be able to preach that it has truly arrived. It hasn’t, but it knows the way.

Eyes on Texas: UT’s moment to reassert itself, rearrange the Big 12 pecking order has arrived