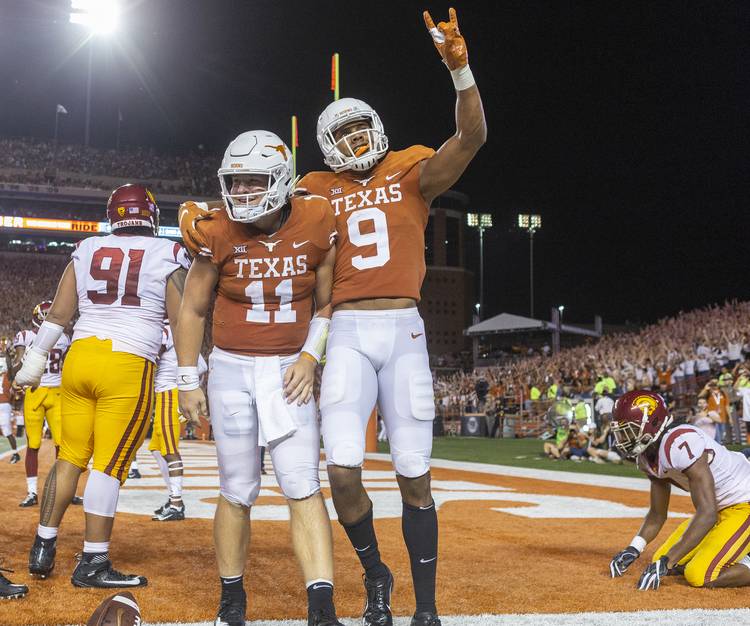 Texas quarterback Sam Ehlinger (11) celebrates his touchdown against USC with wide receiver Collin Johnson (9) in the second half of an NCAA football game at Royal-Memorial Stadium, Saturday, Sept. 15, 2018. (Stephen Spillman / for American-Statesman)

NEW ORLEANS — In the Motown Classic “Ain’t Too Proud to Beg,” Temptations lead singer David Ruffin speaks of being willing to do anything to keep his woman by his side.

Ruffin was born in Whynot, Miss., a few hours north of the Big Easy, where Texas quarterback Sam Ehlinger could be throwing to the electric junior duo of Collin Johnson and LIl’Jordan Humphrey for the last time at the Sugar Bowl.

Sam is the first to admit it: He ain’t too proud to beg.

The decision to return for one more season of college ball or make himself eligible for next spring’s NFL draft has worn heavily on each player even if each insists this week is about beating Georgia in a great bowl matchup.  For his part, Ehlinger makes no bones about begging his two top receiving options to put off the pros for one more year. Johnson told us as much.

They have already received their grades from the NFL advisory committee on whether they should stay or go. Johnson said he was told to return to school, which in draft grades means that he doesn’t project as a player who would go in the first couple of rounds. Jordan declined to divulge his grade. But most most drafts I’ve seen have Johnson going in the late second round or later with Humphrey tabbed for the third round at the earliest.

“You still have to weigh out your options on a personal level and talk to your family and coaches,” Johnson said. “That’s what I plan to do sometime after the bowl game and make a formal announcement about what my decision will be. Right now it’s just all Georgia, and I’m just focused on playing Georgia and finishing off the season strong.”

While some first-round projected picks such as Georgia cornerback Deandre Baker are skipping their bowl games to prep for the draft, good players like Johnson and Humphrey were pretty adamant about playing. This bowl could be the ultimate draft audition for both. And for Ehlinger, who was part of a three-connection that resulted in 144 catches for 2,054 yards and 16 touchdowns, his mind can’t help but wonder what this offense would be like next season if all return with third wideout Devin Duvernay and running back Keaontay Ingram, a star in the making.

Johnson expressed disappointment at not getting a chance to line up against Baker. That shows a competitive streak that adds to his long list of character attributes that make him a player to watch once he puts his name in the draft hat, be it this year or next. We know Ehlinger’s preferred choice. One more year.

After last season, when a half-dozen Longhorns declared for the pros despite being told to return to school by the advisory committee, anything is possible. Though Humphrey wasted a redshirt year by playing only three games his freshman year, the guess here is  that Johnson’s legacy status — he is the son of Longhorn legend Johnnie Johnson, who played a decade in the NFL — would make him a more likely candidate to return to school even if he projects higher in the draft.

“Sam saying that about me and (Humphrey) is humbling and amazing to have a teammate who believes in you that much,” Johnson said. “I definitely bleed burnt orange. I was almost committed to this school when I was born. I was born into a family of Longhorns, so it means the world to me and will definitely go into my decision.”

Join Ehlinger in keeping your fingers crossed for one more season from the best trio this program has seen since Colt McCoy, Jordan Shipley and Quan Cosby.

And if those wideouts come back, where would that put this offense moving forward?

“I can’t even imagine, to tell you the truth,” Ehlinger said.  “We were pretty good this year. Next year would be really, really scary.”

Golden: Georgia RB Holyfield, just like champion dad, has been the real deal