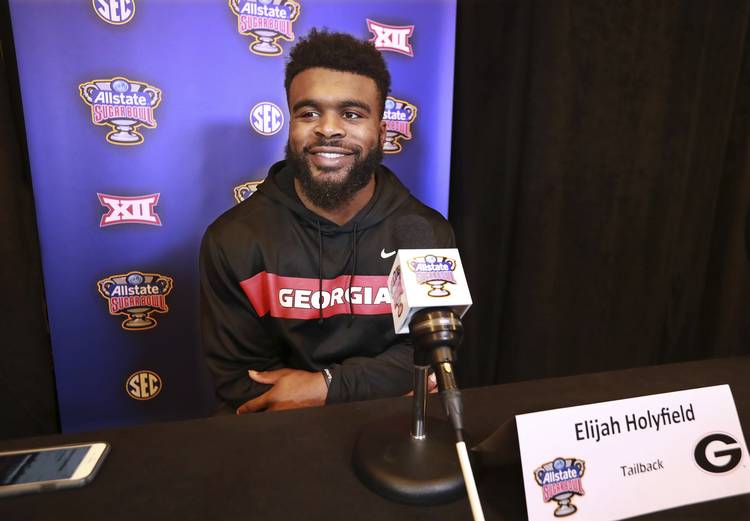 Georgia running back Elijah Holyfield takes questions Sunday during a news conference for the Sugar Bowl against Texas on Tuesday. (Curtis Compton/Atlanta Journal-Constitution)

NEW ORLEANS — Georgia running back Elijah Holyfield is listed at 215 pounds, but it might as well be 400 for those who have witnessed him attack a set of weights.

Just like his father, boxing legend Evander “Real Deal” Holyfield, the junior has few peers in the strength department.

Teammate Terry Godwin remembers walking into the workout facility three years ago and getting a firsthand look at a Holyfield power display.

“I thought (former Georgia running backs) Nick Chubb and Sony Michel were some strong guys, but just seeing Holyfield at 5-9, 5-10 go in there and lift 500 to 600 pounds, it was crazy,” Godwin said. “He’s a beast in that weight room.”

During Sunday’s media availability for the Sugar Bowl against Texas on Tuesday, I asked quarterback Jake Fromm to name the two strongest guys on the Bulldogs’ roster.

“I would say pound for pound, Elijah is the strongest guy on the team,” he said.

Holyfield walked by as Fromm was speaking.

“Elijah, who would you say is the strongest on the team?” Fromm asked.

“I think it’s between me and Ben Cleveland,” he said with a smile. “But if I had to pick, I would have to go with myself.”

What he didn’t mention was Cleveland is a 6-foot-6, 335-pound monster who opens up holes for him and his running mate, D’Andre Swift. So there’s not too much of an argument when it comes to the pound-for-pound debate. Let’s call him the undisputed champ in that department.

“When I first saw, I was kind of surprised,” teammate Andrew Thomas said. “He’s a really big human being. You can tell he got some good genes from his dad. He lifts everything in the weight room.”

Growing up the son of the boxing legend takes away any chance to sneak up on the opposition. His dad whipped Mike Tyson twice and lost only part of an ear when it came to his in-ring meetings with Iron Mike. The older Holyfield is famous the world over and particularly iconic in his home state of Georgia, where his son once scored seven touchdowns in a single high school football game for Woodward Academy.

Elijah, who went his entire high school career without losing a fumble, soon committed to Georgia, bringing two live bulldogs to his announcement.

Sometimes having a legendary father comes with unwelcome attention from some who might want to test your toughness. Not so in Elijah’s case.

“It was really cool growing up,” he said. “It’s a blessing to have a father like that. I wouldn’t say it was difficult. I got to see things, a lot of stuff, people don’t get to see. I’ve been raised by a great dad.”

And what of your ring skills? Did you ever want to follow in your dad’s footsteps?

“I found out I was pretty good at football in eighth and ninth grade,” he said. “My dad was a pretty good football player, too. There’s not too much of a resemblance between football and boxing other than the just hard work and mindset that he has instilled in me. I boxed for a little bit but never enough to think I was going to do it.”

With Chubb and Michel doing the heavy lifting for the 2017 team, Holyfield settled into reserve role, but once those two left for the NFL, he and Swift swiftly carved out their own reputation as one of the most productive running tandems in the country. He’s averaging 6.5 yards per carry and needs only 44 yards in Tuesday’s matchup against Texas to reach the 1,000-yard rushing mark for the first time in his college career.

The duo doesn’t have a nickname, but if it were “Thunder and Lightning,” Holyfield would be the former, no question.

“Holyfield does not like to go out of bounds,” Texas defensive end Charles Omenihu said. “He likes to run people over. He’s very physical.”

Sounds about right. The Longhorns, owners of the Big 12’s second-best rushing defense, won’t have to look to find either guy.

While Swift figures to take his talents to the NFL one year early, Holyfield stands a better chance of coming back next year to be more of a featured back. Either way, expect him to show up looking for a fight at the Superdome.

It runs in the family.

Golden: Sugar Bowl could be the last Longhorns, Ehlinger see of Collin-Lil’Jordan combo