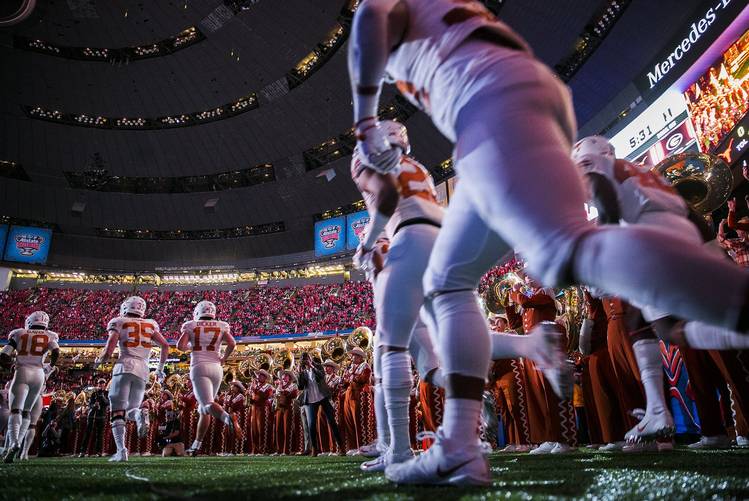 First, some casual observations about the 2018 season:

C’mon, if Gov. Greg Abbott is tweeting it now, it’s a permanent part of UT lexicon.

Bevo Boulevard, simplistic in concept, was terrific. A pre-game concert, $5 beers, cheerleaders, fan engagement? It’s not that hard. Mortuaries have more energy than San Jacinto Boulevard did in previous years.

The whole Journey’s “Don’t Stop Believin’” moment during the Iowa State game was the coolest thing I’ve ever seen at Royal-Memorial Stadium.

But what did we learn about the Longhorns themselves?

“We’re baaaack!” quarterback Sam Ehlinger shouted on the Sugar Bowl trophy stage. OK, I’ll admit it. I laughed with him and simultaneously shook my head with coach Tom Herman on Tuesday night.

Quick aside: Hey, University Co-op, just because the quarterback says it does not mean you should put that on a T-shirt. I get it. By God, we’re Texas. Alright, alright, alright. Sure. But the football gods will not be amused.

As for Ehlinger’s main point, we will see when the Horns reload for 2019. That said, here are my main takeaways from a rather impressive 10-4 season that stretched far beyond anyone’s preseason expectations:

Herman was right to shove all those burnt hot dogs down his players’ gullets in 2017. The Longhorns needed toughening up. Upon his arrival, Herman was stunned how weak some of the players were physically and jaw-dropping shocked at how weak they were mentally.

Two seasons later, does anyone really question UT’s toughness now? The group that lined up against Georgia and punched it in on fourth-and-goal from the 1 defined Texas tough.

“I appreciate you noticing that, that we’ve developed, that we have continued to develop,” Herman said afterward. “I am sure we wouldn’t have been able to do that in week one or week two. But we did it tonight against an unbelievable defense.”

Credit goes to Herman’ insistence on things like “Toughness Tuesday.” If you don’t line up and practice tackling and being physical during the week, you’ll never do it on Saturdays.

How many fans wanted Herman to change quarterbacks after the Maryland fiasco? Wait, wait. I need to see more hands raised. In my estimation, Herman’s decision to stick with Sam Ehlinger against Tulsa was the biggest personnel move of the season.

Finding a quarterback isn’t easy. Garrett Gilbert got booed out of DKR. David Ash couldn’t stay healthy. Case McCoy had that crazy, quasi-sidearm delivery. Tyrone Swoopes was in over his head. Jerrod Heard was a shooting star.

The question now is whether any young quarterback has the determination to compete for the spot. Today’s players want it easy. They don’t want to earn it. Ehlinger is the likely starter for 2019, and he’s tough as nails. But he’s got to improve, too.

Anybody want to fire offensive coordinator Tim Beck now? Does anybody remember why they were mad at him in the first place?

Herman short-circuited the preseason topic du jour by going with the “play-calling by committee” rhetoric in press conferences.

Herman’s self-aware. He knew that if the pressure kept building on Beck — either real or perceived — he’d be forced to make a change just to keep the masses at bay. Rampant staff change helped fuel former coach Charlie Strong’s downfall.

It’s my belief Herman became more active in the play-calling this season than he’ll ever admit. And that’s fine. Herman is the one making more than $5 million annually to call the shots, not Beck. If you’ve got problems with the offense, question the head coach. Don’t waste your time bickering about the assistants, some of whom will likely get new contracts this March.

Standing on the Superdome field with confetti falling all around us, I can tell you that players had real euphoria. This wasn’t some excitement like, “Hooray, we won. Whoop-de-do!” No. This was a real, unfiltered, joyful release.

The Longhorns got a taste of what big-time success really feels like. Let’s be honest, that hasn’t happened around here in 10 years. Remember, some of these players were in grade school when Vince Young scored at the Rose Bowl. To them, that’s ancient history.

Enough about Young and the 2005 season. Spoiler alert: Today’s recruits don’t even know who those stars were.

The Sugar Bowl win over Georgia closed the first chapter of a new book. We’re in a whole new era of Texas football going forward.

5. No drama, no problems

The Longhorns got off to a strong 2018 just by getting through the offseason with virtually no issues. And nobody does drama like Texas.

Think about it. In previous years, the most vocal parent was someone openly complaining about the head coach and his son’s lack of playing time. Now the most visible parent is one who is incredible positive and shares brutal honesty about how difficult this journey truly is. The coaching staff must be relieved.

With the Demarco Boyd situation last July, Herman showed he has little tolerance for off-field shenanigans. It’s not that hard to follow the rules and stay out of legal or university trouble.

6. Horns are just getting started

Here’s the best part about all of this. The brutal reality is Texas still has a long journey ahead. This program still hasn’t won a Big 12 title since 2009 and hasn’t been in the national championship conversation at all this decade.

That’s why Herman hates the phrase “We’re baaaack!” It’s a tired cliché and a national punchline.

“I don’t ever want to give any kind of finality to where we’re at because we are always making progress,” Herman said. “And the win again just means we’re headed in the right direction.”

So much progress this season, so much lies ahead.

And to get this journey going, all it took was one loss to Kansas.