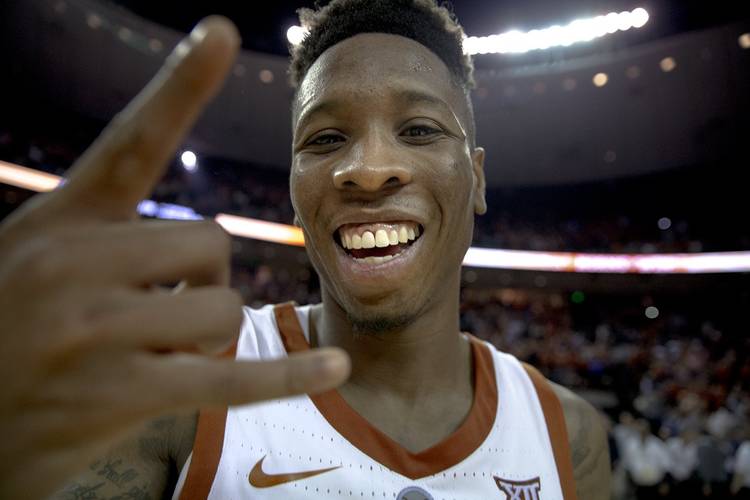 There’s a mistake on the Longhorn men’s basketball schedule.

Senior Day was Saturday, not March 9 in the regular-season finale against TCU.

You’ll excuse Kerwin Roach II and Dylan Osetkowski I if they were a bit confused and played a lights-out extravaganza game in mid-January instead of on their curtain-falling day. Of course, it’s about time Texas got a little ahead of schedule.

The only two seniors on the roster picked the perfect time to post their best performances of the season as a tandem when they proved to be a relentless force and combined for 38 points, 19 rebounds, four assists and one determined mindset to pace the Longhorns to a badly needed 75-72 victory over 20th-ranked Oklahoma at the Erwin Center.

“When you lose three games in a row, any game is an atonement game,” Roach said. “But we came out swinging and fighting. We’re tough-minded.”

“I think we handled the game very maturely,” Osetkowski said.

Some would say it’s past time, and it probably is, but the one they call Snoop and the one they might as well call Droop, considering his bad body language and often sleepy disposition and frequent failure to finish at the basket, carried their team when its season could have hung in the balance. That’s probably not an over-statement because, after a three-game losing streak, they came with a greater sense of urgency than any time all year.

Lose this one, and Texas would have fallen to 2-4 with a road game looming at dangerous TCU and a home date with Big 12 kingpin Kansas sandwiched around a non-conference shindig with Georgia, which may still be ticked off about its football brethren’s embarrassment in New Orleans. Not pretty, in other words.

This home game with Oklahoma was must-win, got-to-have-it, sink-or-swim, no-tomorrow-or-the-day-after-that big. But in an amazingly evenly matched Big 12 where all three ranked teams lost on the road Saturday, Texas (11-7) comes out on fire and now finds itself at a level 3-3 in conference play, just one game out of first place. Come again.

“Yeah, it’s an odd league from that standpoint,” head coach Shaka Smart said when asked his thoughts about being so close to the top (and the bottom).

There is no super team in the Big 12 this year. There’s probably no Final Four team or maybe even an Elite Eight club. But there might six Sweet 16-caliber teams that could go further if one or two peak at the right moment.

The ones that do advance that far and beyond will, no doubt, rely on their older, more seasoned players. Like Roach and Osetkowski, who have yet to win an NCAA Tournament game in their careers but have been on the bad end of some March heartaches like Nevada and, in Snoop’s case, a last-place Big 12 finish and Northern Iowa disaster.

They’ve tasted next to no success in that month and will have to duplicate this kind of night frequently over the next 12 league games if they’re to put themselves in position to finish strong. For those two seniors, Saturday meant some atonement, redemption for some recent poor play by both that put Texas in this position of desperation.

Osetkowski, the muscle-bound man from Tulane, drifts in and out of focus in too many games. He scored just two points in the home loss to Texas Tech a week ago, and too often plays soft in the paint. Roach missed two late shots from the perimeter in that defeat by the Red Raiders, then spaced out mentally and ruined the spacing and ultimately the plan to free up Jase Febres for a potential game-winner at Kansas.

On Saturday, however, with a simplified role, Osetkowski pulled down 11 man-rebounds, scored 15 points on some strong post-ups and hook shots, had zero turnovers and dished one of the night’s sweetest passes from under the basket to a waiting Jaxson Hayes for a two-handed flush. He was Oh-so-this-is-setkowski player that Smart expected.

Forceful? Heck, he was so authoritative, during the post-game press conference, he yanked the microphone away from a teammate just so he could verbally applaud the raucous 11,991 fans that showed up. And “give us kudos for that,” Osetkowski said, bragging on his team’s ability to finish out a game the right way.

Yeah, DO. Bring it. Just like the security guard who told him before the game, “Go put on your cape.” Okay.

Roach was just a monster. He was the Longhorn offense in the first game, at one point scoring 11 consecutive points for Texas, and finished an electric night with 23 points, all the while guarding OU’s dynamic scorer Christian James, although not always effectively. This was freaky athletic Kerwin Roach II, potential Big 12 Player of the Year candidate that Smart needs on almost every night. No upset stomach on this night.

Asked if this is the type of performances he envisioned all year from his two oldest players, Smart said, “Oh, man, that’d be great. That’d be terrific. It’s what you want from your senior leaders.”

Smart said he wasn’t even sure Roach would be available since he took a hard fall in Thursday’s practice and hurt his right ankle. Roach wasn’t always perfect. He missed three layups at one point and “got lost defensively” at times when he free-lances, but his coach admired his mindset and overall resilience.

“They stuck with it,” Smart said. ” Snoop was banged up from injury, but he showed toughness. That’s the biggest thing you want from your seniors.”

Even if it’s not Senior Day.