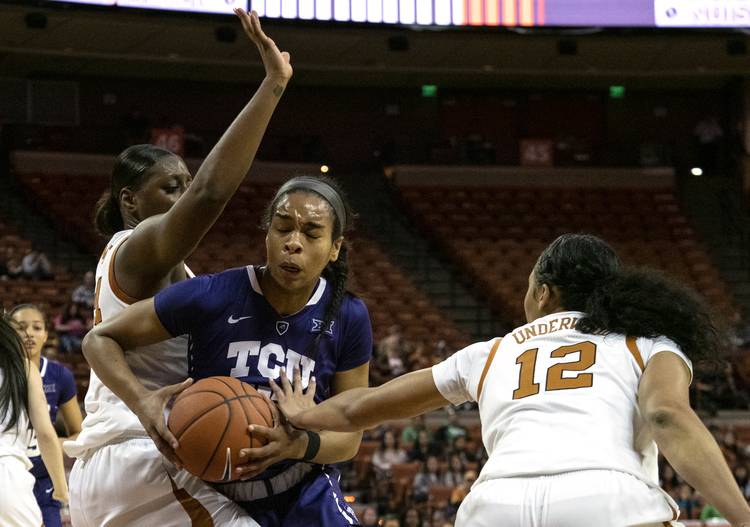 All things considered, Texas is having a good year in women’s hoops.

Even if it’s never easy.

The preseason brought the news of incoming McDonald’s All-American Sedona Prince going down with a broken leg while playing international ball in Mexico City. Then explosive senior guard Lashann Higgs, who was handed the keys to the backcourt by the dynamic duo of Brooke McCarty and Ariel Atkins, tore her ACL in the fourth game of the season.
Advertisement

That was a double dose of devastation for a team that was ranked No. 8 in the USA Today coaches preseason poll.

Saturday’s 73-67 home win over TCU wasn’t aesthetically beautiful, but the Longhorns aren’t really built for easy nights at the office.  Sure they might roll out to a nice lead, but they have this scary little habit of allowing the competition to stick around. The Horned Frogs trailed by as many as 15 in the second half but cut the lead to one before Texas closed it out behind veterans Joyner Holmes and Sug Sutton.

“That’s kind of our demon right now is that we can’t seem to stick the knife in,” coach Karen Aston said. “Part of it is Big 12 play. No one is going to quit on you and lay down. That’s part of it, but some of it is just us staying focused and detailed for long stretches.”

It’s called killer instinct, and most players are either born with it or spend their lives trying to cultivate it. All-time greats like Cheryl Miller, Diana Taurasi, Sue Bird, Sheryl Swoopes and Clarissa Davis had it in spades. Their teammates played better because they knew that person was on their team.  The Horns are still searching for that player to emerge after enjoying the last four seasons with two killers, McCarty and Atkins.

“The dog mentality is hard to teach,” Aston said. “Obviously, I need to do a better job because ultimately it’s on me. I do think think there are people who are born with that, and if you have a few of those, what that can create is a contagious environment in practice and games where you don’t allow somebody … you snap on your teammate and make sure they follow their lead. Again, I can say that about the players, but it’s on me.”

Aston is looking for leaders to emerge, and she’s constantly taking mental notes, even watching her players’ body language during timeouts and listening to who is speaking up, especially when things aren’t going well. With so many players getting more minutes than they did last season, it’s important that someone who isn’t a coach take on that responsibility.

Sutton, a junior, is the leader, but she understands that her voice must be heard more as the most experienced lead guard on the team. She entered Saturday’s game on an offensive tear with 46 points in her last two games but couldn’t buy one against the Frogs. She went 2-for-12 from the field but didn’t allow those struggles to affect other areas. She totaled seven rebounds and nine assists, including a couple of nice feeds to Holmes, who finished with a season-high 17 points.

“Me and Sug have played together for so long so I kind of know where she’s at and she kind of  knows where I’m at,” Holmes said. “So we can feed off each other and read each other and know what kind of passes work for each other. I think that’s a good asset to our team.”

With four winnable games coming up before a Monday night home matchup against Baylor on Feb. 4, the Horns have a good chance to make a realistic run at the Top 10, but the leaders have to continue to emerge.

Texas has leaders, but are those leaders dogs?

Golden: With Kansas looming, Shaka, Longhorns must figure it out — and fast