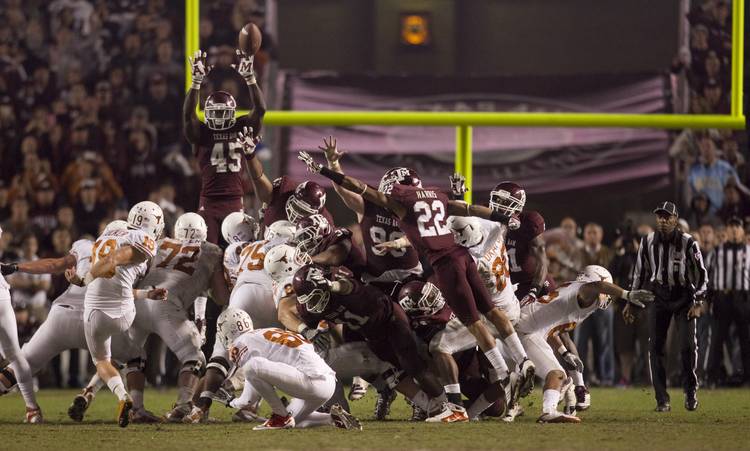 When University of Texas President Gregory L. Fenves sat down with Texas A&M President  Michael K. Young last week at the American-Statesman, a myriad topics were discussed. But we who follow sports were most excited about the possible resumption of a college football rivalry that’s been dormant for seven years and counting.

It’s been a minute since the night in College Station when Justin Tucker’s last-second 40-yard field goal gave the Longhorns a 27-25 win at Kyle Field in November 2011, the last Texas-Texas A&M meeting.

The scheduling logistics are just that: Logistics. Athletic directors Chris Del Conte and Scott Woodward must figure out a way to get back on the field posthaste, but it won’t be easy given the upcoming scheduling commitments on each side.

Del Conte told me Monday he wanted to schedule the Aggies when an opening came up for the 2022 and 2023 seasons. Texas originally had slated Ohio State in those slots, but the Buckeyes requested a reschedule so they could play Notre Dame. Del Conte called Woodward before the 2018 season to gauge his interest.

“They had scheduled Miami,” Del Conte said. “Things like this just depend on when someone has the right opening at the right time.”

He added that was the last time he and Woodward have discussed a possible resumption of the series.

Like all SEC teams, the Aggies play four non-conference games and only eight league games, which gives them a bit more flexibility on the surface. But how excited are they about adding Texas knowing they already play Alabama and LSU every year?

Still, Del Conte is positive it can happen. One day.

“It’s not if, but when,” he said. “Playing A&M is great for the state. Rival games are important for college football. Notre Dame should play USC. Georgia should play Georgia Tech. Alabama should play Auburn. Pittsburgh should play West Virginia.”

And the Horns should play the Aggies.

Bohls: Cat not slowing down, aims at Olympics