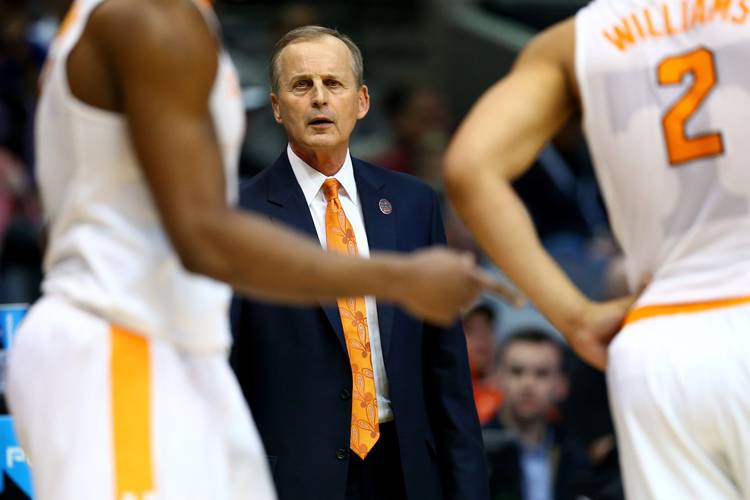 DALLAS, TX - MARCH 15: Head coach Rick Barnes of the Tennessee Volunteers looks on in the first half while taking on the Wright State Raiders in the first round of the 2018 NCAA Men's Basketball Tournament at American Airlines Center on March 15, 2018 in Dallas, Texas. (Photo by Ronald Martinez/Getty Images)

Well, in the neighborhood.

The former Texas basketball coach will return to his old stomping grounds, or at least the vicinity, when he brings his firecracker-hot Tennessee team to College Station on Saturday for an SEC battle with Texas A&M.

His rampaging Volunteers are the No. 1 team in the land. Just as he once had at Texas. It’s a team that has lost just one game in 20 outings — an overly emotional, non-conference contest with Kansas, a blemish that he calls “a blessing” in part because it probably spares the Vols extra scrutiny for possibly going undefeated.

It shouldn’t come as a surprise since Barnes is doing in Knoxville what he did in Austin for so many seasons before a stale offense and exaggerated expectations for the best coach in Longhorns history bought him a ticket out of town in 2015.

He’s never been known for his offensive creativity, but has radically introduced more motion and less reliance on ball screens, can play big or small lineups, plays inside out and boasts the SEC’s No. 1 offense to go with the league’s second-best defense, which has always been a Barnes staple.

“Being picked No. 1 is like (playing) another game,” Barnes told our “On Second Thought” podcast this week, discussing the pressure. “We’ve had the national media here, and we’ve gotten through that. These guys had never been through that, but they’ve handled it well.”

They don’t give mulligans in sports — and you’d be hard-pressed to find many who wanted to keep Barnes back then after a 2014-15 season that was below his standards — but he’s one of this writer’s favorite people in the business and he has more than landed on his feet.

He landed the Volunteers into a new stratosphere, a 19-1 team that has put Tennessee in the conversation to be a No. 1 seed and maybe win that school’s first-ever national championship even though it’s never even been to a Final Four and just seven Sweet 16s.

So does he feel recharged now with a change of scenery?

“I never felt uncharged,” the feisty, 64-year-old Barnes said. “I think y’all wrote that (when) I was at Texas, but I don’t feel any different now than I did then.”

Regardless, Barnes has put a significant charge into a Vols program that had been sleeping as a relevant basketball operation since the days of Bernie and Ernie put Tennessee on the map.

It’d be nice to report the change has worked out best for both sides. As the personable, mischievous Barnes lifts Tennessee into national prominence, Texas is still struggling to gain its footing and any national relevance under Shaka Smart.

The Longhorns did have a strong performance in knocking off 11th-ranked Kansas at the Erwin Center on Tuesday for Smart’s first Texas win over Bill Self, but that upset only leveled the Longhorns’ Big 12 record at 4-4 leading into a treacherous trip to Ames, Iowa this weekend. The win improved Smart’s mark to 12-9 on the year and a mediocre 62-59 in four years, but fans are still hoarse for howling.

Many revisionist Longhorns would gladly wish Barnes back on their sideline, but it was time for a change and Barnes has found basketball nirvana in success-starved Knoxville. Despite his record 402 victories and 16 NCAA Tournament appearances in 17 seasons at Texas, his teams didn’t reach the Sweet 16 in his last seven years since one of his two Elite Eight trips and a Final Four berth.

“I feel appreciative of my time at the University of Texas. I love that place,” Barnes said. “And I would have loved to have finished my career there. But it’s been good. God has a plan for all of us.”

He was always familiar with Tennessee basketball. He’d been offered the Vols job a couple of times in his career. He’d coached at nearby George Mason in Virginia. Barnes’ wife, Candy, got a degree from Tennessee. His family in Hickory, N.C., isn’t all that far away.

The fit has been perfect. The marriage of Barnes and the Vols has produced a sensational, physical team built around strong, rugged forwards who are matchup hell for opponents, and relentless rebounding and hustle. He doesn’t have a Top 100 recruit, but undersized, out-of-shape players like Admiral Schofield and Grant Williams have transformed their bodies and made themselves into legitimate NBA prospects.

Schofield honored his commitment to Tennessee but had to be convinced by Barnes to stay after the coaching change. Williams, who arrived barely as a top 200 recruit, reminds Barnes of P.J. Tucker, the doggedly tough Longhorns rebounder who stuck with it and has become a strong part of the Houston Rockets’ core.

“They were both out-of-shape players, and they like the ball close to the basket,” Barnes said. “Their body fat was too high. They spent a lot of time on the treadmill.”

Schofield reduced his body fat to nine percent and averages almost 17 points a game. Williams evolved into last year’s SEC player of the year and is in the mix for the Wooden Award, assuming Duke’s Zion Williamson doesn’t hog all the prizes. The duo combined for 47 points and 18 rebounds in a 22-point win Wednesday over South Carolina, a team that went to the Final Four the year Schofield and Williams were cutting their teeth.

The tide has turned.

The fans have more than adopted Barnes. Knoxville just might be the best-kept secret in all of college basketball. Barnes can still recall a home game at Thompson-Boling Arena on the afternoon of New Year’s Eve last season against Tennessee Tech. Long-time assistant Rob Lanier tapped his boss on the knee and told him to look around. A raucous, 16,000-plus crowd had packed the building.

“The fans have really connected with the team,” Barnes said. “The style of play has really resonated with them.”

Barnes’ team fell to Cinderella darling Loyola-Chicago in the second round last year but is poised to make a deep run this March. But he says he doesn’t need a national title for ultimate fulfillment.

“Everybody wants to do that,” he said. “Our players would be disappointed if I said that wasn’t our ultimate goal. But you’ve got to get there first. I want these guys to embrace the moment. There are a lot of winners, and we just want to be the last one.”