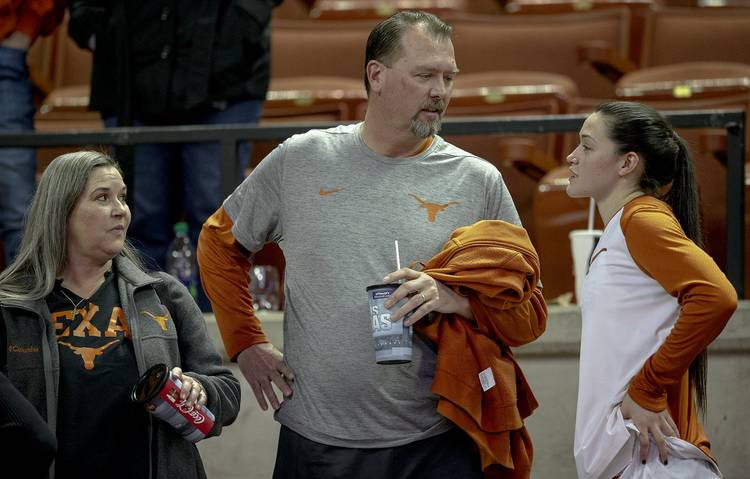 Danni Williams will be with her Texas teammates Saturday when the 12th-ranked basketball team takes on Oklahoma in Norman.

So will Regan and Michelle Williams.

Danni will return to Austin for a big Monday night showdown with top-ranked Baylor.

So will Regan and Michelle Williams.

Danni has nine Big 12 games remaining on her Longhorns schedule.

In all likelihood, her parents have nine as well.

To say this family is inseparable borders on the understatement of understatements. Danni came into the world 22 years ago, but the umbilical cord to her family in Clovis, N.M., might as well have never been severed. These guys are tight.

By their estimation, Danni’s parents have missed only two of Texas’ 21 games this season and very few of her games at Texas A&M, where she was a second-team All-SEC honoree and sank 71 triples as a junior. They went to all of her games as an Aggies freshman even though she didn’t average 10 minutes a game.

PREVIEW: No. 12 Texas at Oklahoma

All season long, they’ve been in their usual seats in Section 23 behind the Texas bench for home games at the Erwin Center as they track their only daughter’s final college season. They’ve been eyewitnesses as this Longhorns sharpshooter and leading three-point scorer overcame a nerve-wracking start when she hit two of her first 19 shots before settling into a rhythm and hitting 42 treys this year.

The three-time New Mexico Gatorade player of the year is the epitome of a catch-and-shoot player for the 17-4 Horns, but she has difficulty creating her own shot. That said, she has developed her total game and helped the team in other ways besides scoring like defense and rebounding.

“She’s become a much better all around player,” Texas coach Karen Aston said. “She really studies the game and does a lot of film work. She’s a total gym rat, and she’s always prepared.”

So are her parents, who rarely miss the games of their “Sweet Pea.”

They came when Williams scored 15 points against Stetson and TCU.

They came when she went 0-for-7 from the field in a two-point loss, a frustrating home setback to West Virginia on Monday.

And they’ll keep coming. And have for the duration of their daughter’s college career, which spanned three years at Texas A&M and this final season as a grad transfer at Texas. She chose to leave the Aggies and offensive-minded Gary Blair because she wants to be a college coach and learn new systems and expand her experience under the more defensive-centric Aston.

Williams has considered occupations like cardiologist and Top Gun pilot — “I love to go fast,” she says — but wants to coach because she says she has a passion for helping people. Her dad even let her draw up plays as the coach of her New Mexico/Texas Heat Elite AAU team.

Her parents have always encouraged her independence, but then she’s been “a pretty strong-willed an extremely competitive girl” her entire life, her mom said.

“They mean the world to me,” Danni said. “To have someone up in the stands and travel the distances they have to see me play, I’m so thankful.”

This is just who the Williams family is, a tightly bonded group that also includes two sons. The parents aren’t so much living vicariously through their daughter as much as they just want to support her. It began when Regan — who played briefly at York College in Nebraska — was Williams’ AAU coach and they traveled as far away as Nashville and Las Vegas for games, and it hasn’t let up. So every morning of a night game in Austin, they make the 480-mile trek in about eight hours to get to the Erwin Center in time for the tip.

How do they get time away from his job as a manager of a rural phone company and hers as a hospital manager?

This is their vacation.

Heck, they’ve put so many miles on their odometer, they’re on their second car. Their white Honda Pilot regularly guided them the 540 miles to College Station until they worried it might give out on one of their Austin trips and they’d miss a tipoff. So they retired it after 95,000 miles and christened a new dark blue Audi Q5. It’s already got  21,000 miles on it.

Cars, of course, run in the family. Williams was an admitted tomboy growing up in the football-centric New Mexico town who never wore dresses. She even played Little League football and was an all-district volleyball player. In her spare time, she used to help her dad clean oil filters on the motorcycles they raced when she wasn’t riding dirt bikes.

And true to their promise, her parents bought her the car of her choice after high school graduation as a straight-A student because she got a full-ride scholarship to A&M.

A customized, white Mustang with red leather interior that she takes so meticulous care of, she fussed at her A&M roommate Anriel Howard because she wasn’t climbing into the car carefully enough. “I’m pretty picky,” Williams said.

That’s putting it mildly. She might wash her car every day, she’s such a fanatic about it. “It’s spotless,” Regan said.

She’s clearly driven. Hers is a career that’s going to take her places, much like her adoring parents.

And during all those trips through dusty West Texas, just how many speeding tickets have they gotten?

“None,” Regan said. “Just a couple of warnings.”

Golden: Texas women should be elevated after tight loss to top-ranked Baylor