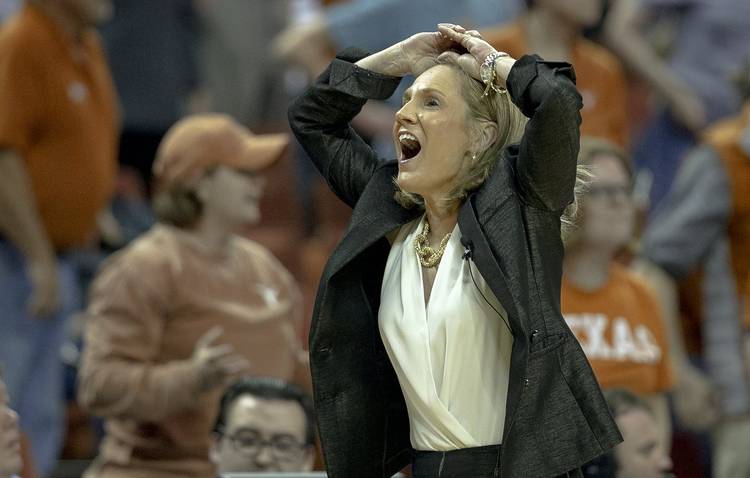 The Texas women aren’t on Baylor’s level, but for one quarter Monday night, Karen Aston’s Longhorns outplayed a team that’s expected to be in the national title mix.

One might say Texas put a slight scare into the nation’s top-ranked team. Well, at least enough of a scare to make things interesting in the 75-68 loss at Club Erwin.

“It was good for our team to show some grit and some character,” Aston said. “It’s something that we have to find a way to show a little more of.”

Aston’s charge is how to get that fourth-quarter effort out of her group for a whole game. Good teams play with that edge most of the time. Great teams live it. Baylor is the gold standard in the Big 12, and the 28-13 edge over the final 10 minutes not only saved the Horns from utter embarrassment but also provided a bit of spark in the restless crowd.

Texas is what it is: A pretty good team that’s a little short on experience but solid enough to go a round or two in the postseason if the cards fall the right way. While no one ever wants to speak of moral victories, the result could be a galvanizing mechanism that could propel Texas (18-5, 8-3 Big 12) to better results moving forward.

That is, if the Horns are committing to selling out in this fashion, regardless of opponent. Baylor owns this conference because Kim Mulkey has her team playing not just against the opposition, but to the standard she has set in her legendary coaching career.

Baylor has owned this series over the past 10 years — we can’t call it rivalry when one team has won 19 of the last 20 meetings — but the Horns showed some real moxie down the stretch after falling behind by 21 in the middle of the third quarter.  They played with the perfect mix of poise and desperation, and thanks to some big-time play from veterans Danni Williams, Sug Sutton and Joyner Holmes, this game actually became a game in the final five minutes.

In short, Texas played up to the competition. Shots began to fall  with an increase in tempo and the Longhorns got more hands on loose balls with some amped-up defensive pressure. Next thing you know, the Horns were down only 69-64 with about four minutes left until Baylor regained its equilibrium.

Here’s what we know about the program. There’s genuine excitement about next season because guard Lashann Higgs and center Sedona Prince will be back  from injuries to join Sutton, Holmes and New York guard Celeste Taylor, Aston’s latest McDonald’s All-American. It might represent Texas’ best chance to make a run at Baylor since the Bears’ two big girls will graduate.

Monday’s loss gave us a glimpse of what Texas could be with the right intensity, and that has to come from the players and not the coaches. They got after their opponent late in the game, and for a span of 10 minutes there wasn’t a whole heck of a lot separating the 14th-ranked Horns from the No. 1 Lady Bears.

Mulkey has become one of the least subtle coaches in the profession and one of the most entertaining. When discussing Texas’ furious comeback, she complimented the Horns — with the back of her hand.

“Lordy mercy, if they play like that for four quarters, they’re not going to lose many games,” Mulkey said.

Mulkey even low-key called herself a great coach — she is — when asked about the possibility of losing to a Texas team that was a 12-point home underdog. Hey, It’s not bragging if you can back it up and last I checked, the Lady Bears are 20-1. The national rankings say Baylor is the best team in college basketball. Better than Louisville, better than UConn, better than Notre Dame and better than Oregon.

The Lady Bears looked the part midway through the third quarter. Twin towers Kalani Brown and Lauren Cox are the best high-low post duo in the country and guard Moon Ursin, who scored 20 points, has the potential to be the next Odyssey Sims. If Mulkey can get any kind of solid guard play, particularly if Ursin plays like she did Monday, well, I’ll let Aston tell you.

“If that happens, they’re going to be a problem,” she said.  Aston wasn’t talking about the Big 12, but the NCAAs.

Aston’s job is to make sure her team becomes more problematic for the opposition. The effort that went into nearly toppling Baylor can’t be every now and then. It has to be a way of life.