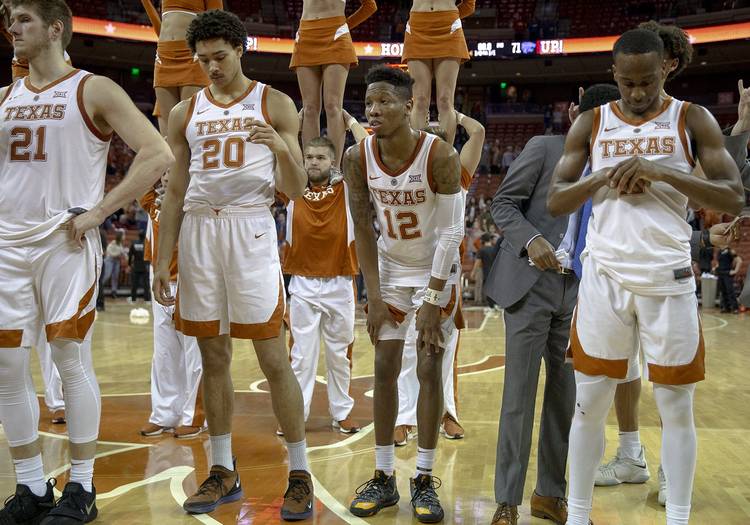 Texas guard Kerwin Roach II (12) stands for the playing of "The Eyes of Texas" following Texas' 71-64 loss to Kansas State in an NCAA basketball game on Tuesday, Feb. 12, 2019, in Austin, Texas. [NICK WAGNER/AMERICAN-STATESMAN]

The Texas Longhorns can scrap, claw and battle all they want but their fate will ultimately rest on the performances of the most experienced players on the roster.

To steal a line from athletic director Chris Del Conte, seniors Kerwin Roach II and Dylan Osetkowski are the OGs on this ball club and serve as a two-headed barometer of Texas basketball.

When they’re playing well — and they had been over the last couple of games — Texas has gotten favorable results. But when one or both has struggled, things have gone south.

Advertisement
As a senior, (Roach) sets a big tone for us as does Dylan,” UT coach Shaka Smart said after Texas’ 71-64 loss to No. 18 Kansas State, one that the Horns could have stolen had they maintained their level in the second half. During a first-half timeout, Smart looked into his players’ eyes and implored them to embrace their own potential.

“Do not over-respect these guys,” he said. “This is a basketball game against a team that we are better than.”

Shaka was right when he said it.  The Horns were giving the Wildcats everything they could handle and more. But there’s something about having a team of veterans that have been through some ups and downs together. That familiarity comes in handy when things are going south and that’s what happened in the second half.

K-State had that experience and it won out.  Dean Wade, Kamau Stokes, Barry Brown and  and Xavier Sneed lead one of the most tournament-ready teams in the country. The  Wildcats made all the right plays down the stretch because a regular-season game in Austin was right in their wheelhouse. They played with poise and tact on both ends and solidified their Big 12 lead to move closer to their first conference regular-season title since sharing one with Kansas in 2013.

Meanwhile,  Roach, Texas’ most senior of seniors — Dylan O. is finishing up his second season after transferring in from Tulane for his junior year — turned in a clunker. The 17 points were fine, but Snoop went 0-for-5 from three-point range and turned it over a game-high six times with zero assists. He played pretty well in the first half but a smartly placed zone by K-State coach Bruce Weber cut down his driving lanes in the second half and Roach and his teammates didn’t adjust well.

“Offensively we got stagnant and the percentages showed,” Roach said. “Going forward, we know we can beat any team. We just have to do the details, the little things. And me as a I senior … I had six turnovers. I can’t do that.”

Osetkowski made only two of his seven field goal attempts but finished with nine points, six rebounds and a season-high three assists. He has quietly become a more efficient player in the second half of the season despite fewer offensive touches on a team that has spread it around on that end. Unlike last season, Osetkowski isn’t forcing the issue. He has matured into a thinking man’s player and his teammates are feeding off his energy. When he’s making a concerted effort to play big, good things have happened.

Want an example of the more cerebral approach he’s taking? Early in the first half, Osetkowski got the ball in the corner with no defender within five feet of him. As a K-State player closed in, he decided against taking the three-pointer and whipped it over to Courtney Ramey, who knocked down the shot. Osetkowski is shooting 23 percent from downtown while Ramey is sitting at 38 percent.

Last season, Osetkowski would have jacked that thing up, no question. His willingness to launch threes from all angles was a source of frustration for Longhorn Nation and coach Shaka Smart but something has happened in the twilight of his final season. He’s making better team decisions, not being concerned with his numbers.

Osetkowski has figured out that he isn’t the first offensive option on this squad. We’re no longer talking about which hairstyle he’s sporting this week but about the plays he’s making to help the Horns on what they hope is the road to another appearance in the NCAAs.

The best message a senior can send to his younger teammates is to bust his butt while he’s in the game and be an example with his play and not his words. Roach is certainly savvy enough to understand that he must take better care of the ball during the most crucial part of the season. Osetkowski gets that he must continue to provide the hard-nosed example for younger bigs Jaxson Hayes and Jericho Sims to follow.

Both must be at their best if Texas, now 14-11 overall and 6-6 in conference play,  is to figure out a way to extend its season past the conference tournament.