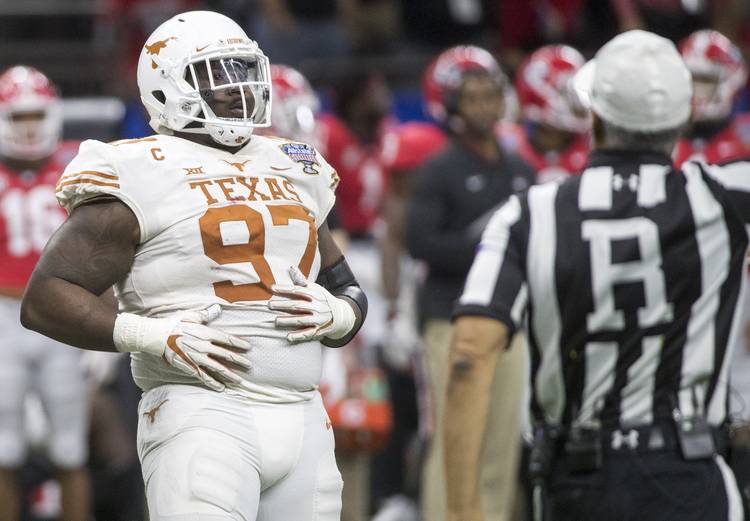 Get to the league.

For newly graduated Texas players Chris Nelson and Andrew Beck, their journey to the NFL may not come with the perks of some higher-profile teammates, but they are putting in the necessary work to make that dream happen.

Both went through two years in a bowl-less wilderness under former coach Charlie Strong before finishing their careers with a 17-10 turnaround that included a couple of bowl wins under Tom Herman. As their college careers fade to the background with hopes of making a living at this game, they’re preparing for UT’s pro timing day on March 27 while five former teammates will travel to Indianapolis for the NFL scouting combine on March 1.

Nelson had a productive year at defensive tackle with 39 tackles, including 5.5 for loss, but he didn’t get a combine invitation.

“From all the word I was getting coming off a great game at the Sugar Bowl and then the Senior Bowl, I was going,” Nelson said. “The coaches were telling me they wanted to see me as a pass-rusher. They told me I had some great practices.”

Beck, a tight end who caught 28 passes for 281 yards and a pair of touchdowns, got a similar message from his conversations at the East-West Shrine game. But no invite to Indy.

“I wasn’t necessarily heartbroken about not going because I will be at Pro Day where a lot of the coaches will be attending,” Beck said. “It’s bittersweet because I wanted to go, but the good thing is I will have another month to prepare.”

Other former Longhorns have walked a similar path to get to the league. Defensive tackle Poona Ford was a notable 2018 combine snub but posted numbers at his pro day that blew away most of the defensive tackles that had gone to Indianapolis. Considered a longshot to make the Seattle Seahawks as an undrafted free agent because of his 5-11 height, Ford ended up as a regular part of the rotation up front in the second half of the season and finished with with 22 tackles.

Ford and Nelson are working out together at APEC Fort Worth, the same shop that helped get former Horns Malik Jefferson and DeShon Elliott ready for the 2018 combine and draft.

Ford is proof that a non-invite doesn’t mean you can’t make it.

“I tell Chris that you have to go through some obstacles sometimes to get what you want,” Ford said. “It’s not like we haven’t been there before. We’ve been getting out of the mud for a long time. It’s nothing new for us.”

Said Nelson: “He already knows what I’m going through. He thinks I’m going to get drafted.”

Beck wanted to get away from Austin and find a spot where he could get his body and mind in the best shape possible for timing day. Somewhere off the beaten path. Somewhere free of distractions.

So why Las Vegas?

“I know, my mom doesn’t believe it either, ” he said. He’s working out at Phase One Sports at the suggestion of Vegas-based MGA Sports, which is providing him representation. He lives in an apartment less than two miles from the Vegas Strip but insists his time there is all about business.

“We run and lift six times a week,” he said. “We run in the morning, lift in the afternoon, then jump in the ice bath. By the time that’s over, I just want to get off my feet. The Strip is nice to look at, but I haven’t been doing much of anything.”

Beck hopes to follow the same path taken by former UT tight end Geoff Swaim, who didn’t exactly put up record numbers with 13 career catches for 84 yards. But he worked out well for scouts. Labeled an average athlete by some, he went in the seventh round to the Dallas Cowboys in 2015. In 2018, he doubled his UT receiving totals with 26 catches for 242 yards and a touchdown in nine games before suffering a season-ending wrist injury.

“I played with him my freshman year and he’s a great guy,” Beck said. “He was a really great mentor in watching how he worked hard and how he carried himself.  Now he’s showing how to carry yourself as an NFL tight end.”

The destination is the same for all, even if the journey is different. Beck and Nelson are taking a healthy cut at their NFL dreams. Good for them.

“We all face some adversity, but that just makes us stronger,” Nelson said. “Our goal is to kill it at pro timing day.”

Bohls: Mitrou-Long, Hamm a pair of ‘energy brothers’ for Horns