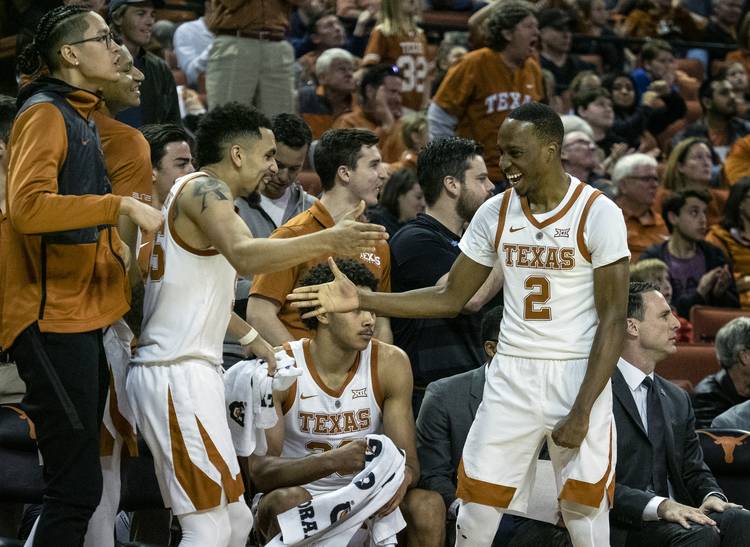 Texas won a critical Big 12 basketball game against last-place Oklahoma State before an engaged 10,406 fans at the Erwin Center on Saturday afternoon, and the Longhorns have junior Elijah Mitrou-Long and sophomore Royce Hamm Jr. to thank.

And aren’t they unheralded reserves on this talented Texas team that squeezed out a 69-57 victory over the outmanned Cowboys to remain on the sunny side of .500 at 7-6 in league play?

As a matter of fact, they are. But they’re also glue guys, junkyard dogs or “the energy brothers,” as head coach Shaka Smart labels them.

As such, they’re valuable components of this 15-11 team striving to reach the NCAA Tournament even if Hamm has played in only 11 games and Mitrou-Long saw his minutes cut way back with the emergence of freshman Courtney Ramey.

Smart calls the 6-foot-8 Hamm “probably the most selfless guy on the team.” Who cares if he was the third Texas center to get into the game? He’s added 15 pounds of muscle to his frame and doesn’t mind mixing it up down low.

Mitrou-Long has started nine games this season but has had his playing time drastically reduced, though Smart said, “His attitude of late has been phenomenal. He’s all about his teammates.”

Mitrou-Long was everywhere on the floor Saturday, and I do mean the floor. He hustled after every loose ball, harassed guard Isaac Likekele from end to end and juiced up the crowd by drilling a 3-pointer from the corner and taking a charge.

“He provided a spark,” star guard Kerwin Roach II said of Mitrou-Long. “He’s a dog. We’re all dogs. For a time, he was getting all the charges, and I was getting jealous. But I appreciate him.”

Hamm made the most of his time on the court. The sophomore from Houston Aldine Davis blocked a shot in the second half to force a shot-clock violation, then fiercely battled multiple Cowboys under the basket to get his own rebound and putback to get a rise out of his Longhorn teammates.

“You could hear the crowd appreciate it,” Smart said.

There’s no energy stat in an official box score, but if there were, these two below-the-radar Longhorns might lead the Big 12 in that category. They’re two key backups who stoke the team’s competitive fires in practice, who bang with the starters and who are ready to step onto the floor whenever they’re called.

“I want to be strictly an energy-giver,” Hamm said. “When we’re playing against the Orange team, which is the starters, I’m trying to go at the guys and get ’em ready to play.”

Heck, assistant coach Darrin Horn, who coaches the bigs, even has a drill especially suited for Hamm. It’s called the Hamburger Drill. Horn throws a basketball off the glass, and it’s all elbows and hips and sweat as Hamm battles Dylan Osetkowski, Jaxson Hayes and Jericho Sims for the ball. Or GTB. Grab The Ball.

“I think he named the drill after me,” said Hamm, a guy with an irrepressible smile.

He went by the nickname “Rolls Royce” in high school and even wore that tag on the back of his letterman jacket at Aldine. These days Smart has taken to calling him “Death Row Mentality” and encourages him to go full speed, run the floor and stay on the attack. He sure attacks as if it’s his last game.

“I give Royce so much credit this season for sticking in there, just sticking with the process,” Osetkowski said. “He knows that some games he might not play, some games might play a little bit. Every day in practice, he’s one of the hardest playing dudes. To see him do what he does in the game, reap the rewards, I love it.”

Mitrou-Long has had to bide his time in Austin. He originally committed to Florida Gulf Coast, but his scholarship inexplicably got yanked before he arrived, and he settled in at Mount St. Mary’s. There, he played for a former Smart assistant, who introduced him to the Longhorns. He later signed with Texas and, like Osetkowski from Tulane, had to sit out his transfer season. He thanks D.O. for his moral support.

That’s a difficult transition. A transfer can’t play but busts his butt in practice and works to make his teammates better.

Of course, Mitrou-Long has always had to work extra hard for everything he got. He’s one of 10 children. And he was always undersized. One of his older brothers, Naz, who starred at Iowa State, was on hand Saturday and razzed Eli good-naturedly before giving him his props.

“He’s never beaten me one-on-one,” Naz said, grinning. “But he always had the ability to create off the dribble. He always had a handle.”

Both of them have an edge to their game, especially Eli, who was all of 5-3 as a ninth-grader. And as sons of Jersey Long, a professional kick boxer for more than a decade, they learned how to scrap. Both turned to boxing to add to their toughness.

Hamm and Mitrou-Long have futures that go beyond being practice players. Hamm’s a versatile big who can run the floor and move. Smart said he “can be a phenomenal rebounder and one of the best energy guys we’ve got.”

As for Eli, Smart said he’s played so much better once he cleared his mind and played for the greater good. His upside?

“It’s what you saw today plus,” Smart said. “He’s an unbelievable spiritual leader. I know he can shoot the ball at a higher clip as he becomes more comfortable, and he’s got that chip on his shoulder. We need that edge.”

And the energy brothers always deliver.

Golden: Too much fizzle, not enough sizzle for the Texas women