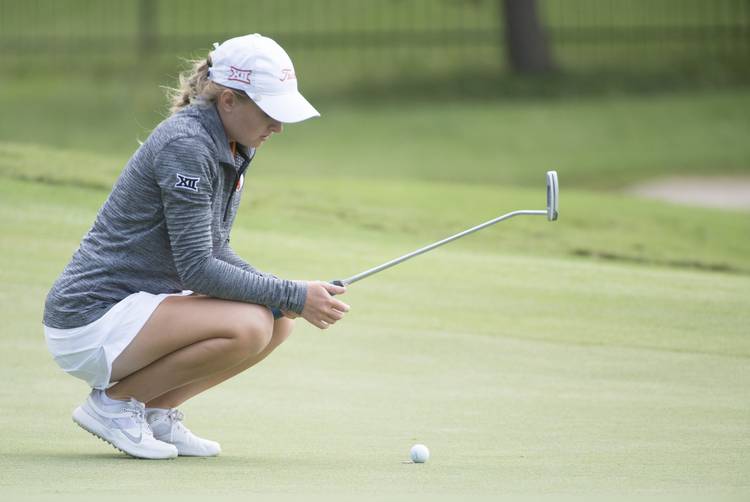 The event is still two months away, but Papp is already jacked up about the chance to compete in the inaugural Augusta National Women’s Amateur Championship this April, a 54-hole, stroke golf event with an international field of 72 players.

So what will the Longhorns star be most jacked up about?

Yeah, you could say she’s excited.

So are her Texas teammates, Emilee Hoffman and Agathe Laisne, who also were invited to take part in this first-ever golf tournament at the most prestigious golf course in the world. They’re all pumped to represent Texas and get the chance to play on the same hallowed, immaculate grounds that Tiger Woods and Jack Nicklaus have walked.

Papp, last year’s Big 12 player of the year and freshman of the year, saw the initial tweet last month that invitations were going out, and she got a call from her sister that the precious mail had arrived. Papp begged her not to open the envelope.

“I felt really accomplished and blessed,” she said.

Hoffman was on a family vacation in Arizona when her invite was being delivered, but she too was attuned to the timing.

Both Papp and Hoffman expected the invitations because of their high rankings. Papp sits at No. 24 in the World Amateur Golf Ranking, Laisne at No. 40 and Hoffman at No. 65.

But Hoffman can remember sitting down a year ago with her Longhorns coach, Ryan Murphy, and together mapping out her future goals. Her world ranking hovered then around the No. 150 mark, and Murphy told her she’d need to get inside the top 72 to qualify.

She’s since been on fire, finishing a career-best tied for second at the Northrop Grumman Regional Challenge this month and tying for 11th along with teammate Hailee Cooper at last week’s Sugar Bowl Intercollegiate Golf Challenge, which No. 3-ranked Texas won. Laisne has five Top-20 finishes in her last six events. Texas is so deep, senior Maddie Luitwieler played well and finished tied for eighth in the Sugar tourney as the low Longhorn in the field.

But before this surge, Laisne figured she’d end up five or so spots out of contention. So when she received the letter at home in Paris, France, she tore it open in front of her mother, and they rejoiced together.

This ground-breaking event should bring valuable exposure for the already successful Texas golf program. Only Duke with five and Arizona State with four will have more players competing than Texas. It also should help Murphy continue to recruit on the international front. He’s already dipped his toe in foreign waters for talent like Papp and Sara Kouskova, who has been a member of the Czech national team since 2013.

“We’re looking around the globe,” Murphy said. “It’s lucky for the University of Texas that we can attract athletes from all corners of the world.”

The talented trio aren’t guaranteed to play the pristine Augusta National course, however. The first two rounds will be held at Champions Retreat Golf Club in Evans, outside Augusta. The field will be cut to 36 for the final round on Saturday the week before the Masters begins with three hours of live television on NBC.

Those who make the cut will get to practice on the same Augusta course as former champions Jordan Spieth and Patrick Reed and deal with what Hoffman described as the “diabolical greens.”

“We don’t hit the ball 350 yards like the men, but we realize women’s golf is just as exciting as men’s,” Hoffman said. “This is incredibly prestigious. I hope it brings more awareness to women’s golf. Augusta is iconic.”

They are very familiar with Augusta National, where no blade of grass is unmanicured.

The Longhorns team has even had television watch parties to take in previous Masters. In Hoffman’s freshman year, Murphy took the team to a practice round at Augusta. Papp watches the Masters every April and is stunned by “how tight the golf course is, especially off the tees. It’s very much about placement golf with all the undulations.”

Laisne is still captivated by the shot that two-time champion Bubba Watson made out of the pine straw in the woods guarding the right fairway on the 10th hole of a playoff with Louis Oosthuizen to win the 2012 Masters. Watson’s creative recovery shot from 164 yards to the pin came to rest just 15 feet from the hole, allowing him to two-putt for the title. The memory of it still dazzles her.

“I felt that shot was impossible, and he did it,” Laisne said. “That tells me to always have imagination.”

Even when it comes to incoming mail.