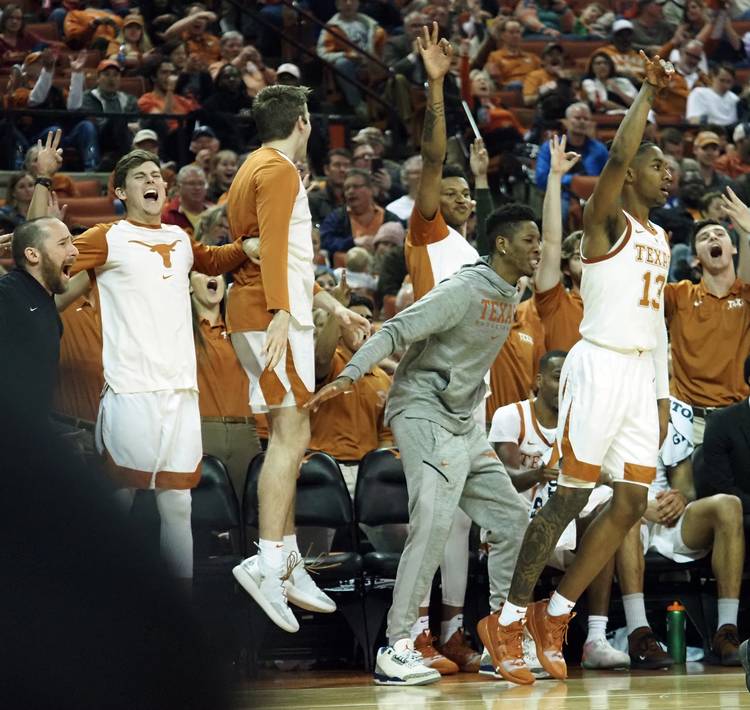 The Texas bench celebrates with Jase Febres (13) after he hit another 3-pointer against Iowa State on Saturday. [Rodolfo Gonzalez for Statesman]

Jase Febres learned it all from his dad.

The proper technique of shooting a basketball, that is.

Squaring up the shoulders. Letting go at the top of his jump. Snapping the wrist. Keeping the elbow tucked in. Following through.

Orlando Febres passed it down to his son.

“My dad was a better shooter than me,” Febres said. “He was me.”

That’s a pretty strong endorsement because the sleek 6-foot-5 slinger is showing he’s the best shooter in the Shaka Smart era and maybe the school’s best since tiny A.J. Abrams, who would run through two or three screens at a time to get open before burying his silky 3-pointers.

Jase’s dad played for the Puerto Rican national team and once sank 11 treys in a single game. Jase rattled off 13 during his AAU days at a game in a Dallas tournament, and he’s still on target. “Dad always said, ‘Make sure your jumper’s pure.’ ”

On Saturday afternoon at the Erwin Center, the sophomore drilled 8 of 10 shots from behind the arc in a career-high 26-point performance to help Texas rout Iowa State 86-69 to stay in the hunt for an NCAA Tournament at-large berth with an 8-8 league record and a 16-13 overall mark.

“My confidence is getting higher and higher,” said the ponytailed sharpshooter, who has now hit 20 of 39 long-range attempts in his last three games and has sunk at least five triples in all three of them.

He’s healthy now after getting kneed three times in practice and suffering a bone contusion in his thigh.

Febres patterns his play after his hero, Paul George, and wears the same No. 13 jersey but also tries to borrow from the games of catch-and-shooter Klay Thompson and pump-faking Devin Booker. “Paul George’s jumper is beautiful,” he said.

At the core, however, he says he owes it all to his dad, who taught him the fundamentals as a seventh-grader.

But Febres learned more than that from his father, too. He learned how to grow up. In some respects, he had no choice because his father died of intestinal cancer in 2015,  when Jase was just a high school sophomore, after a six-year battle with the disease. His passing hit his only son very hard.

“That was a really big time in my life,” said Febres, who said he went through therapy and learned how to meditate last summer to help him deal with some depression. “That was right around when recruiting started to get heavy. But I knew I had to stay strong for my little sister, my mom and my grandmother.”

The intensity of recruiting didn’t help any. And the battle for the Houston Westfield guard’s services among Texas, Baylor, Houston and Stanford went down to the wire. Almost past the wire.

The then-17-year-old guard said he prayed for guidance the night before signing day. Even more than that, he asked God for a sign.

“That night I had a dream,” Febres said. “There was me and Pops walking through the Erwin Center.”

He was sure the answer to Smart’s prayers. The coach has been stressed about finding someone who could make a shot, any shot, on the perimeter almost from the day he arrived in Austin.

It may have taken four years, but he might have finally found one in Febres and maybe another in freshman Courtney Ramey, who actually has better shooting percentages than his teammate. Ramey’s also had more playing time until Febres joined the starting lineup in the absence of the suspended Kerwin Roach II. Ever since, it’s been more of a free-flowing offense.

Smart calls Febres the second-best shooter he’s ever had, right behind Phoenix Suns guard Troy Daniels, the Virginia Commonwealth gunner who once hit an Atlantic 10-record 11 treys in a game and had 251 in his college career.

“But Jase is ahead of where Tony was at this same stage,” Smart said. “He’s got an effortless stroke, and he can get it off in a short amount of time. He’s finding his way in the game and as a person. He’s becoming a man.”

Jase is on his way. Smart admits he worries that something’s amiss when Febres turns quiet. His new budding star is “very introspective and a thinker” and a son who “really wants to make his dad proud.”

He’s well on his way to doing that with a big upside.

As Smart said, “He’s going to make a lot of shots here.”