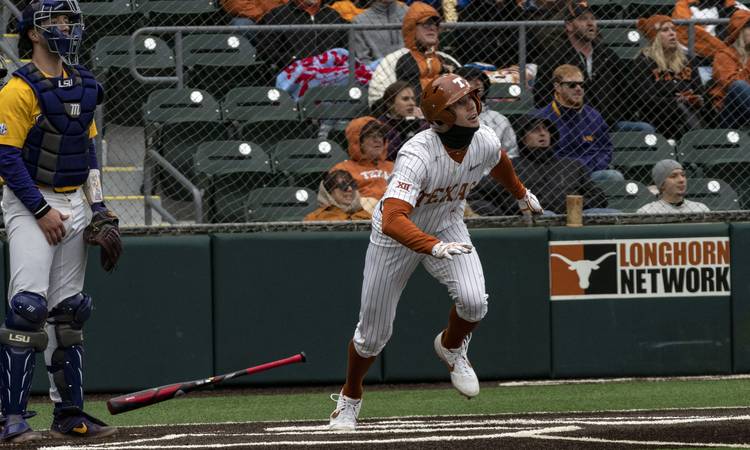 The remnants of shaving cream on Austin Todd’s face and neck said it all.

Todd, who’s arguably Texas’ best hitter, wore the very visible vestiges of a crown with pride after driving in the decisive run of a three-run, ninth-inning rally Sunday afternoon for a 7-6 comeback win to bury an LSU team ranked No. 1 in three of the five college baseball polls and No. 2 by D1Baseball.

After winning the first two games of the series and leading 3-1 after four innings on a miserably cold, blustery afternoon with the temperatures in the low 40s, the 22nd-ranked Longhorns could have accepted a last-game loss to the heralded Tigers, trailing 6-4 in the ninth. But Todd’s sharply hit single up the middle brought Duke Ellis home from second and secured the impressive, three-game sweep.

“We’re never going to back down,” said the junior outfielder, who earlier had smacked a two-run homer over the right-field wall at UFCU Disch-Falk Field. “We could have easily gotten down, but there’s not one guy in our locker room who would lay down.”

There’s also not one single guy in that home clubhouse that Texas (10-3) will rely on this season to carry the load. There’s no Kody Clemens to knock the cover off the ball and stare down an entire opposing team like he did in last season’s magical ride to the College World Series.

“I’m no Kody,” offered Todd, who missed parts of last season with thumb and shoulder injuries.

But he’s a pretty good Todd.

“We don’t have the one superstar,” Texas head coach David Pierce said. “We have kids who are very good, some gritty guys who understand their own strength. And some guys who can run.”

And that balanced offense, coupled with some tremendous arms, could be the ticket for a surging Texas this season. That combination could make for something special by the time June arrives. It sure won’t be the defense from the looks of it; the Longhorns committed three more errors Sunday and a whopping seven in the series. Through 13 games, the team has a scary 22 of them, which can be a recipe for disaster, but four of those came in the last four games from Texas’ pitchers.

Instead, Texas has to count on arms like Bryce Elder, Blair Henley and Coy Cobb at the top of the rotation and an outstanding, bottomless bullpen with Cole Quintanilla, who may be nailing down the stopper’s position, Kam Fields, Mason Bryant and Ty Madden.

And offense, which is a sight for sore eyes.  Texas scored 23 runs in three games.

Pierce isn’t jumping the gun but has to be ecstatic.

“It’s early information,” he downplayed, “but it proves we can play with anybody in the country. We have enough arms and we have some gritty guys. And it shows we’re still growing.”

Consider Pierce’s lineup. It’s not overly blessed with power bats, but six Longhorns have already gone deep this season. For the second time in the series, Texas strung together 11 hits, this time against starter Eric Walker, impressive freshman Cole Henry and veteran closer Todd Peterson, who can get it to the plate in a hurry at 97 mph. Five of those 11 hits Sunday were for extra-bases from a team that can get around the bases.

Eric Kennedy, just a freshman but earmarked for success, bats second in the order and produced six hits in 14 at-bats. He had a pair of doubles Sunday and beat out a potential game-ending double play chance by LSU to prolong the winning rally. Third baseman Ryan Reynolds seems poised for a breakout season. He had three hits in the game, including an RBI double in the eighth. Duke Ellis is Mr. Wheels and beat out an infield single in that ninth. Catcher Michael McCann is an iron man.

And then there’s Todd in the 3-hole.

“They’re a good team,” LSU catcher Zach Watson said. “They like to go up the middle, and they worked it. They keep doing that, they’ll go far. Everything rolled their way, but they got the job done.”

Maybe by the time May rolls around, they’ll barely remember this sweep of LSU. Or maybe it will be remembered as the springboard to an outstanding season and even better post-season.

In any event, there figures to be many more such celebratory moments. So Pierce would be wise to stock up now on extra shaving cream and avoid the rush.

Golden: In a must-win defeat, stumbling Texas made no case for an NCAA Tourney bid