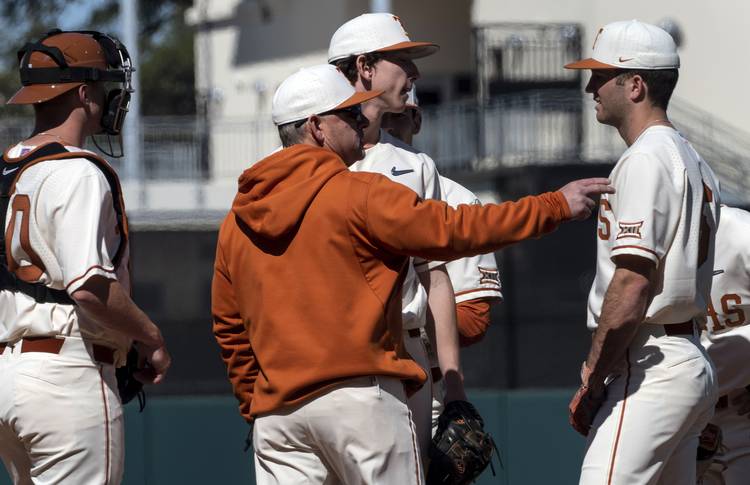 Texas coach David Pierce, calling for a pitching change against Purdue earlier this season, has been getting good mound performances but needs more production at the plate. [Rodolfo Gonzalez for STATESMAN]

The hits didn’t keep on coming for the Texas Longhorns on Saturday.

And in big-time college baseball, that’s nowhere near enough.

For the third time this season, Texas was held to a single hit, and this time it was in a Big 12 showdown with the Texas Tech Red Raiders.

The 3-0 loss followed the tenor of Game 1: plenty of good pitching with sprinklings of offense.

After their 4-3 win Friday, the Horns never got out of park against Texas Tech junior right-hander Caleb Kilian, taking their first Big 12 loss.

“He had our number today,” catcher Michael McCann said. “I think were having a tough time deciding what to swing at and what not to swing at. He kept us off balance the whole game.”

“I thought Blair (Henley) was outstanding early,” Texas coach David Pierce said of his own starter. “He mixed all four pitches well, and I thought (Kilian) was very good, and that’s unfortunate because he’s been struggling and we allowed him to come in here and get well today.”

Tech closer Clayton Beeter loaded the bases with walks in the ninth, but Ryan Reynolds flied out to end it. A crowd of 7,879 — the largest regular-season crowd in UFCU Disch-Falk Field history — kept waiting for the Texas rally to come. And waiting. And waiting.

Call this what it is: a pitchers’ series. Texas managed only five hits in the opener but was able to get out of the Disch with a win on a pair of sacrifice flies and a two-run error from Tech third baseman Josh Jung. Meanwhile, Tech, which entered the weekend averaging 9.1 runs — fifth-best in the country — has scored only six runs in two games.

I asked McCann what he thought Texas’ advantage would be had I told him before the series that Tech would have only six runs in 18 innings.

The offensive struggles added up to a series tie going into Sunday’s finale. Zach Zubia’s second-inning single was about it for Texas. The late walks gave the Horns a slugger’s chance, but that’s a tough proposition given the daylong struggles. Texas’ inability to figure out Kilian added up to a hard-luck loss for Henley, who threw seven innings of shutout ball before he placed a couple of runners aboard and balked in the eighth, leading to his departure.

He had good command of his curveball and used it as his out pitch on five of his six strikeouts. At one point, he started 11 of 12 batters he faced with a first-pitch strike. He even threw in a five-pitch sixth inning. Add to that, Texas played errorless ball for a third straight game for the first time this season. Big opportunity missed.

A little bit of offensive support could have put Texas in position to sweep the series, but the Red Raiders aren’t ranked No. 11 for nothing. They found a way to get the win.

“It was one of those game where we couldn’t scratch anything across and didn’t have any timely hits,” Pierce said. “We tip our hats to them and get ready for (Sunday).”

In previous years, Longhorn pitching has been ahead of the offense early in conference play, but the bats have historically come around with warmer weather, so it’s way too early to panic about the offense. There’s enough talent in this lineup to score consistently as we move forward.

In case you’re interested, temperatures are expected to approach 70 for Sunday’s 1 p.m. first pitch. That’s about 48 degrees warmer than the Texas offense was Saturday.

It’s time to heat up.