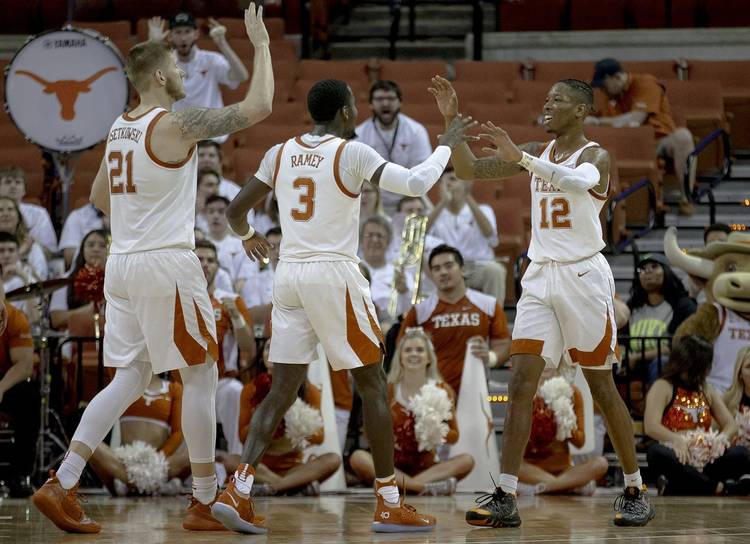 They had to start somewhere.

Yeah,  I know there several truckloads of Longhorns basketball fans who were looking down their noses during Sunday’s second-round NIT game against Xavier with some side eye mixed in.

Here’s a news flash: The season may have ended for a checked-out fan base outside of those who showed up, but it continues for the basketball team.

Advertisement
Now the paying customer has a right to choose where and how to spend his/her dollar,  even if the $14 they were charged at Club Erwin for a  matchup that meant next to nothing on the national scene qualified as a inexpensive entertainment. Texas ‘ 78-76 overtime win before a spirited crowd of 3,204 might not register since this tournament is playing the background to March Madness, but if coach Shaka Smart is to improve his sagging Q rating with the fans, this was a start.

It’s not that Texas won, but how it won. They Horns stood up to the bigger, burlier Musketeers who went 9-9 in the physical Big East and didn’t shy away from contact when it mattered most. Sophomore post Jericho Sims made the biggest defensive play of his career with his block of Zach Hankins’ last-second putback that would have ended Texas’ season. He whiffed on the boxout but recovered in time to extend his team’s season.

“It was a close one,” Sims said. “It was a good thing that I could get up quick enough to block that. It was definitely something that I didn’t want to happen but I stayed with it.”

He then stepped up in overtime with four crucial free throws. The Horns needed every one.

Senior Dylan Osetkowski sat for most of the second half as Smart to a smaller lineup but harassed Naji Marshall just enough to coax a close miss as the game ended.

They scrapped, they clawed, and for the first time time since early February, the Longhorns emerged with a second straight win.

It’s something that’s been lacking all season: Resiliency. Texas didn’t show it in must-win games down the stretch and while it should be mentioned that the Horns were missing senior guard Kerwin Roach in that 1-5 finish, someone needed to step up and more times than not they did not. The Horns made the hustle plays and won those 50-50 balls their coaches have been stressing all season. They also picked up Roach who missed eight free throws, three of which could have iced the game in overtime.

It wasn’t perfect but Texas will take the win. Any win.

“I love  (my teammates)” Roach said. “They kept my head in it. It’s easy to focus on the bad things that’s going on in a game like missing free throws. But at the end, they had my back and I had theirs and we stayed in it.”

Moving one step closer to the semifinals at New York’s Madison Square Garden is a big deal in the locker room, even for a head coach who understands that he wasn’t brought in here to win the NIT.  Freshman guard Courtney Ramey told me last week that he was excited about the prospect of playing in the hoops mecca, and his performance stood out on both ends, not only on offense where he and teammate Jase Febres scored 17 points each, but on the defensive end where he sold out against some talented Xavier guards and finished with a career high eight rebounds.

Xavier is the 22nd tallest team in college basketball and went 6-11, 6-9, and 6-7 up front and Texas, playing without 6-11 post Jaxson Hayes, was playing a bigger team for the first time since the Feb. 12 home loss to Kansas State. Credit to Horns for not backing down.

Smart gets after Ramey because he sees the upside, even the two aren’t always the best of buds.

“He and I fight a lot on the non-game days,” Smart said. “The last couple of days with him, we’ve been at each others’ throats in practice because there are things I think he can continue to do better.”

So it continues. Texas gets the winner of Monday’s Norfolk State-Colorado matchup at home.

Winning NIT games isn’t ideal, but the Horns have to start winning somewhere, sometime.  Perhaps there will be carryover into next season and that can only help given the ups and downs the program has gone through in Smart’s tumultuous campaign.

Golden: Johnny “Lam” Jones was much more than just a Texas legend