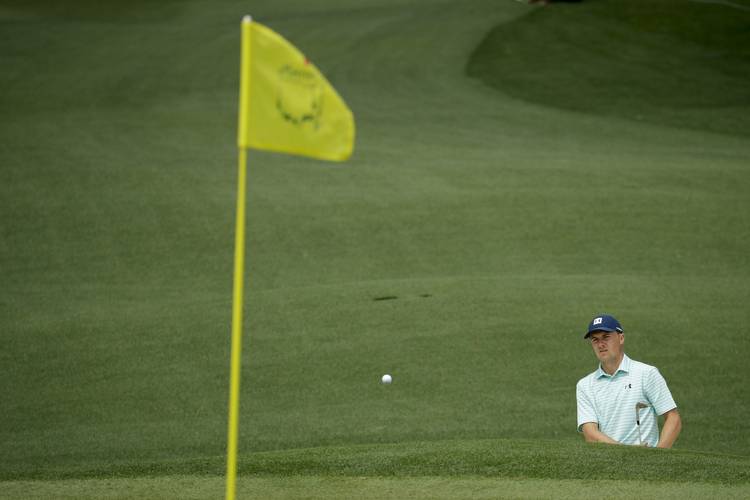 Jordan Spieth hits out of the bunker on the second hole during a practice round for the Masters golf tournament Tuesday, April 9, 2019, in Augusta, Ga. (AP Photo/Charlie Riedel)

AUGUSTA, Ga. — With one more day before the start of the 83rd Masters, everybody wants to know.

But nothing that Augusta National can’t fix.

Maybe a drive down Magnolia Lane is all he needs to jump-start his game.

“My expectations are high this week,” Spieth said. “I feel great about the state of my game right now.”

Perhaps he’s trying to convince himself.

Or maybe he just set the bar too high. Spieth started out at an other-worldly pace, winning three majors in his first 19 starts. He won 11 times on the PGA Tour before he turned 24. Since 1983, only Tiger Woods had a hotter early streak, winning 15 events before his 24th birthday.

Since then, Spieth has been searching.

For consistency. For scoring. For progress.

He hasn’t won in 40 straight starts, an amazing streak for someone of his talent. In his last 22 tournaments, he has but a single top 10, that coming in last year’s British Open.

“I feel like my recent results aren’t a tell of where my game is actually at,” said Spieth, newly married since November, “and I feel I’ve made a lot of strides in the last couple days in the tee-to-green game. My long game has been the only separation from being able to win golf tournaments over the last month or so.”

In reality, he was born to win the Masters. He can feel it in his bones. He has enough nerd in him, enough history buff that he relishes the chance to make history here. Ben Crenshaw was that way.

“Jordan should be coming into the Masters feeling like his game is on the uptick,” CBS broadcaster Jim Nantz told me. “Plus, when he gets on the grounds of Augusta, he immediately feels all the positive vibes that he has built up through the years. His record here is quite phenomenal, and I expect him to play well.”

Now he may have to talk himself into playing well because his game has been off for the better part of a year now.

You know a golfer’s pretty damn good if he’s 33rd in the world and his game is being dissected like a frog in a high school lab. But even Spieth has to be rankled inside when he hasn’t won a tournament since the 2017 British Open or roughly a golfing lifetime ago.

“I know he’s experimenting a little bit,” said Crenshaw, a two-time Masters champion. “He’s waiting to see things in a positive light. He’s looking forward to familiar settings and drawing his strength from that.”

If he’s frustrated internally, he sure doesn’t show it outside. At least outside the ropes.

Spieth’s always impressed with his poise every bit as much as his overall game. He’s never been that long off the tee. Precision, a terrific short game and clutch putting were always keys to his success and the biggest reasons he comes into his sixth Masters as a three-time major champion.

But everything’s been a little bit off. Suddenly, he’s been erratic as a weekend duffer. He made five top 10s last season but also missed the cut in five of his 23 tournaments. He’s missed three more cuts this season and has but one top 25 finish, that coming in another disappointing tournament, his hometown WGC-Dell Technologies Match Play two weeks ago. He didn’t even escape group play, falling to Bubba Watson.

“It’s only a question of time for Jordan,” Hall of Famer Tom Kite said. “I’m a huge Jordan Spieth fan. Over time, I don’t worry about Jordan.”

The Masters may be his cure-all.

He’s always said this is his favorite tournament, and his showings have reflected that. He almost became at 20 the youngest golfer to ever don the green jacket, but he fell to Watson on the back nine. He had to wait just one year before capturing the tournament with a wire-to-wire victory, an 18-under 270 to beat Phil Mickelson and Justin Rose and stamp him as a golfing prodigy.

He didn’t disappoint, winning the U.S. Open at Chambers Bay two months later and threatened to become the first golfer since Ben Hogan to win the Masters, U.S. Open and the British Open before finishing tied for fourth at St. Andrews.

That’s a lot of history he’s already made.

“I’ve come in here twice after missing cuts in the week before and been in the last group Sunday,” Spieth said. “I think the two years I finished second, I missed the cut the week before, which is a little bit unusual.”

Of course, Spieth is all about pulling off the unusual.

And winning here wouldn’t be out of the ordinary for him.