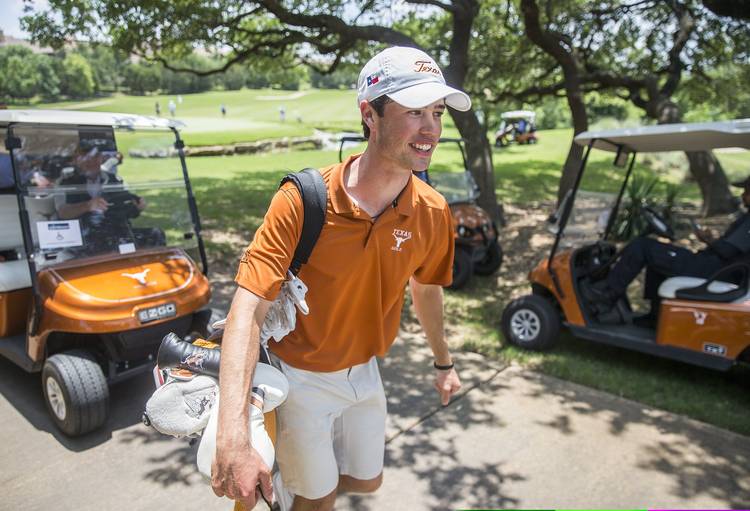 Texas’ Cole Hammer, a junior golfer for the Longhorns, will tee off at the U.S. Open on Thursday as the No. 1-ranked amateur player. He has played in one other Open before, as a 15-year-old in 2015. (Ricardo B. Brazziell/American-Statesman)

Cole Hammer has always felt at home at the UT Golf Club.

Even before it was home.

This Texas freshman felt so comfortable at the school’s private golf club in west Austin that he committed to becoming a future Longhorn at age 14 even before he won first place in the George Hannon Invitational there on the long, hilly course in 2014.

“Yeah, I knew I wanted to come here early,” Hammer said, “even before I knew where I was going to high school.”

But then, first has been the goal of this next big thing for the Longhorns for quite some time. The trend continues.

On Wednesday, Hammer shared the individual championship of this NCAA Austin Regional with a pair of seniors, Texas’ Steven Chervony and TCU’s Stefano Mazzoli, with identical 9-under par scores in a runaway Longhorns victory by a whopping 20 strokes over TCU to advance to the NCAA championship in Arkansas.

But the kid with the perfect golf name and almost as flawless a game has been used to winning for a long, long time.

Hammer started swinging a plastic club when he was 2. Yeah, 2.

“He played in his first tournament when he was 5,” his mother, Allison, said as she and husband Gregg walked all 18 holes along with all four of Cole’s grandparents.

So did he win?

And a star was born.

The next star, if you’ve been paying any attention to Longhorns golf of late. He’s been good for a bit now. And so has nearly every player for UT’s John Fields recently. His program spews out golfing pros like Hershey’s does kisses.

You may have heard of Jordan Spieth, who has been struggling this season but had a meteoric pro start with three major championships before he was 24. Doug Ghim was low amateur at the 2018 Masters and finished top 12 in last week’s Byron Nelson. Scottie Scheffler just earned his PGA Tour card for next season.

Beau Hossler’s come close to winning on PGA Tour. Jhonattan Vegas, Dylan Frittelli and Brandon Stone are three of five former Longhorns who will tee off in Thursday’s PGA Championship at Bethpage. Tom Kite and Bob Estes are still swinging away on the Champions circuit.

Heck, Hammer played in his first U.S. Open as a 15-year-old wearing braces and a wide smile. “The TV guys went nuts over his name, how cool it was,” said Gary Hammer, his paternal grandfather. “Hammer Time.”

Now he’s got a killer chipping and wedge game, silky smooth putting, great distance control and a fertile imagination. The long, lanky 19-year-old scored 15 birdies in three days at this regional — one on a chip-in from 45 feet on hole No. 3 — and had one bogey and nine birdies his final 28 holes.

Hammer’s just the latest in what is becoming a long and longer line of golf royalty, and twins Pierceson and Parker Coody — grandsons of 1971 Masters champion Charles Coody — are right on his heels.

“Cole can play with the best players in the country,” Fields said. “He’s relaxed. And he can win at any time. His upside is substantial. He has the opportunity to keep developing and spreading his wings. I know where he wants to take his game.”

But no time soon.

He knows how good he can be. He’s already ranked as the world’s sixth best amateur golfer, and he’s already played hundreds of tournaments, including the Western Amateur, which he won last year. But he’s in no hurry to test the professional waters.

“I’ve got three more years and four more NCAAs first,” Hammer said off the 18th green after completing his final round with a 5-under 66.

Besides, this is a kid who likes school. The Houston Kinkaid product has always liked challenging classes and goes out of his way to manage his schoolwork alongside a rigorous golf schedule that forced him to miss 22 class days this year. That said, he’s had a single B in a tough economics class with all the rest As.

The life of a college golfer can be a grueling one, schedule-wise. Heck, Hammer once got home from a road tournament at 2 a.m. and had to take a mid-term exam at 8, just six hours later.

This toothy, rose-cheeked freshman can barely keep his pants up he’s so thin. He’s dropped almost 10 pounds from his now 155-pound frame, and his mom said dutifully she needs “to fatten him up” with some home cooking.

But he’s living the life and appreciates what he has.

He was taught the game by his parents, both of whom have been club champions at River Oaks in Houston where Gregg works in private investments. After giving up baseball — one of Hammer’s passions before suffering an elbow injury and needing a cartilage graft — to end his career as an infielder/pitcher, he’s concentrated solely on golf. He occasionally works with golf instructor Cameron McCormick, who also tutors Spieth, but he never watches instructional videos.

He’s so unassuming, Hammer has Spieth’s private number but never uses it because he doesn’t want to bother him. College coaches didn’t know whether to recruit him or try to adopt him.

He became such a golfing fanatic at an early age, his mother went overboard and even had two golf holes cut out of his wood floors at their Houston home with overlaid carpet for him to practice on stormy days.

Or, considering how his career is taking off, maybe not so crazy at all.

Bohls: From triumphs to tragedies, Texas’ Harrison Scott has overcome a lot on, off court