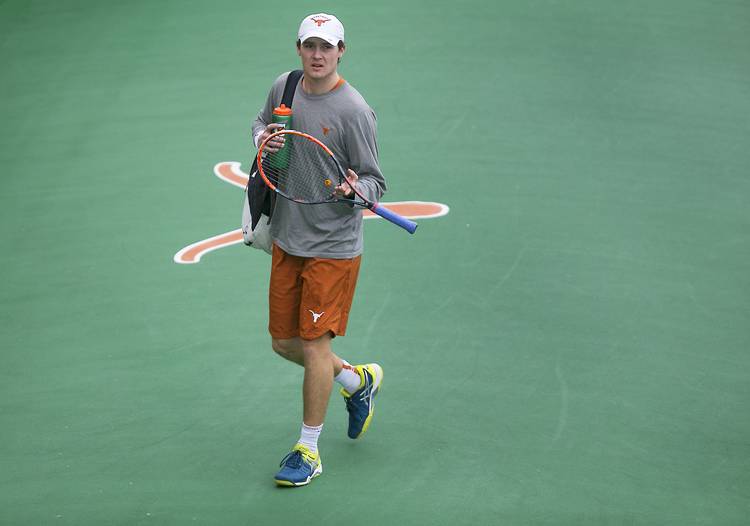 Harrison Scott, one of Texas' top tennis players, has been a force for the Longhorns in both singles and doubles play this season. [RALPH BARRERA/AMERICAN-STATESMAN]

When Harrison Scott arrived on campus three years ago as a wide-eyed freshman from Canada, then-Texas assistant tennis coach Bruce Berque could hardly get a word out of him.

“He would barely speak,” Berque recalled. “He was really, really quiet. He started not only speaking up, but I kid him that now he never shuts up.”

But those who do come in contact with the mature senior who has qualified for both the individual singles and doubles in the NCAA Championships along with No. 2-seeded Texas in the Elite Eight in Orlando, they’d be wise to listen.

Scott’s got plenty on his mind, in part because he’s lived a lot. And experienced much more beyond his outstanding career on the tennis courts where he’s gone 19-5 at the No. 4 spot in dual singles this season and knocked off heralded opponents like North Carolina’s Josh Peck and USC’s 31st-ranked Laurens Verboven.

On Thursday, Scott teamed up with doubles partner Christian Sigsgaard of Denmark to help lead the Longhorns to a 4-1 win over Big 12 rival TCU and advance to the quarterfinals against the Baylor-Florida winner.

A strong baseliner with a self-proclaimed “high-risk game,” the lanky, 6-3 Scott was initially very uncomfortable playing doubles, but his game and his confidence have evolved to the point that he and Sigsgaard, Texas’ No. 1 singles player, make up UT’s top doubles team.

In dual match play, the combo has won 13 of their 19 matches, which is remarkable considering Scott first filled in as a replacement for the injured Adrian Ortiz. The pairing stuck.

“My freshman year, I didn’t enjoy playing doubles,” Scott said. “I always felt bad if I missed a shot.”

And the strength of his game?

With good reasons. He’s had to have that. Scott, 22, has overcome any anxiety on the court as well as all kinds of drama and tragedy off it. And far too much darkness.

All in a span of 20 painful, soul-searching months. Each as tragically improbable as the one before. All with no substantive explanations or satisfactory answers forthcoming.

Scott was willing to openly discuss these heartbreaking ordeals, but out of respect for the intently private families, he preferred not to use his friends’ full names and in one instance any name at all for the first childhood friend he lost two years ago.

“It’s definitely been tough, those kinds of losses,” Scott said. “Frankly, when my first friend killed himself, I didn’t know how to react.”

He does now. He’s unfortunately become far too accustomed to those numbing, early-morning phone calls out of the blue. The first came on a Sunday morning on July 3. Scott had just completed his freshman year at Texas. His 18-year-old buddy from Calgary, Alberta, had been suffering from mental illness and depression but had told no one to what extent.

He had hanged himself six hours earlier.

“It was more shocking,” Scott said somberly. “You want to know how come. Why? I was a bit mad. People have told me he was very depressed, but I don’t think anybody took him seriously. He had a very outgoing personality, and I guess he felt this was the only way out.”

The friend left a suicide note, but his family chose not to reveal its contents.

Just four months later, in November, Scott received a text informing him that another friend, Josie, had overdosed on drugs in her dormitory room and died. She also was 18. Josie had played tennis as well and later quit the sport but continued to work at a tennis club situated right below the Scotts’ hillside home.

“After the first one, I was really mad. I thought it was a selfish act,” Scott said. “But they really think it’s their only way out. I’ve learned it’s OK to talk to someone. There’s no point in hiding it. It’s important to get it out and get help.”

The close friend from their middle school days who was studying abroad in Australia did send out a few signals. He would often cry out for help in desperation but only when he was drunk, and friends dismissed it as effects from too much alcohol. But Scott said Spencer “never opened up when he was sober.”

One evening in March 2018, Spencer became deeply intoxicated again. He, too, hanged himself.

“That was probably the most painful of all,” Scott said. “He was so light-hearted, so happy. He was always cracking jokes and fun to be around. He was one of my better friends.”

Premature deaths have shaken Scott, who is described by teammates as a very intelligent and caring teammate. But he’s adjusted well. Twice, he spoke to a sports counselor provided by Texas. He took days off from practice to deal with the losses.

“He doesn’t really talk about it a lot,” Sigsgaard said. “It came up this year once or twice. For sure, it’s been tough for him. Definitely it’s in the back of his mind. That’s kind of why he lives in the now.”

A close family has helped. Glen and Barbara Scott have been tremendously supportive of Harrison as have his two older sisters. They have frequently come to see him play at the UT Tennis Center and his parents are in Orlando.

Harrison has grown up a lot, probably a little too much, over the last four years away from home. He’s among the first to advocate fun activities for the team. They went to Universal Studios on a road trip to USC. He’s already pushing a diversionary day in Disney World.

As one of four seniors on the team, he was among the first to speak up when their coach, Michael Center, was implicated and eventually pleaded guilty to conspiracy to commit mail fraud in the nation-wide, college admissions bribery scandal this spring. They got through it together.

He’s remembered, and he relies on this team’s tight bond. He will need an extra semester to complete his government degree and plans on attending law school in the future. Pro tennis is a possibility.

“He really likes the game,” Berque said. “He’s very resilient on the court and doesn’t get rattled. And he’s a very caring, thoughtful person. He’s always upfront with his feelings.”

Scott could give pro tennis a whirl as well because Berque said “he’s got some weapons.” But he wouldn’t be surprised if Scott embarked on a political career. Who knows? Maybe some day he’ll become the prime minister of Canada.

After a whole lot of tragedy.