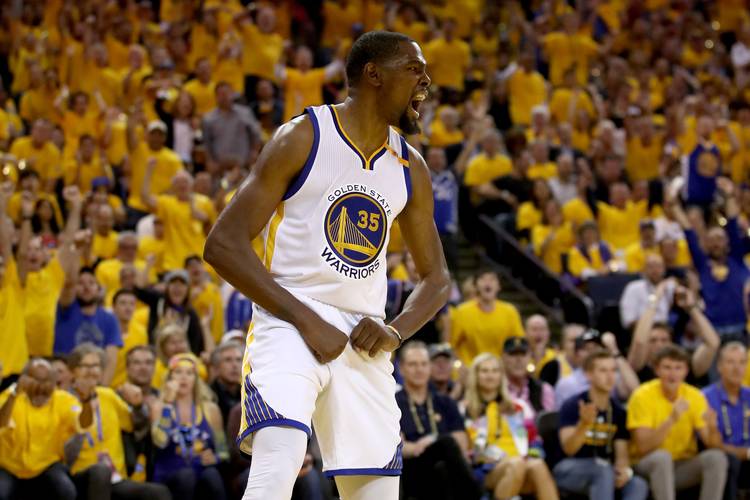 Before Kevin Durant limped off the court with a calf injury in Game 5 of the Western Conference semifinals, the Golden State Warriors were the odds on-favorite to win their fourth title in five seasons.

Now with KD still on the shelf as the Dubs await the winner of the Eastern Conference Finals between the Milwaukee Bucks and Toronto Raptors, here’s what every NBA fan has to be wondering:

Has Durant played his last game for Golden State?

If the Warriors win a title in his absence, does it it diminish what he accomplished when he won those two Finals MVPs?

Make no mistake about it. Golden State would not have beaten the Houston Rockets in the Western Conference semifinals as easily had Durant not been leading the way. The offense went through him and Houston had no answers in the 4-2 series loss.

Unfortunately, that career heater he was was on one round ago — he averaged a playoff best 34.2 points per game — came to an abrupt halt early in the fourth quarter of a pivotal playoff game. After he missed Game 6 against the Rockets and the first two games of the conference finals against Portland, some league pundits moved the surging Bucks up to the top of the list of title favorites.

With their best scorer unavailable, something happened in the Golden State locker room. The Warriors remembered they were a great team before Durant got there. They went back to their old motion offense, sent Houston home for the offseason, and then put away the Blazers in four games. Steph Curry, who had been missing as many layups as three-pointers early in the Houston series, regained his form and quickly assumed his former alpha dog role in that offense.

For those keeping score at home, the Warriors are 30-1 in games where Curry has played and Durant has not.

All of a sudden, the Warriors, once thought to be potentially mortally wounded with center DeMarcus Cousins and Durant both injured, are an odds-on favorite to win it all even if Durant doesn’t return to the lineup. Coach Steve Kerr told reporters on Thursday that Durant is doing some work in the weight room but hasn’t been cleared to do any on-court training. That could all change in a day or two, but as for now, he may miss the start of the Finals, which are scheduled to begin on May 30.

Either way, Golden State will be well rested, entering the Finals with more than a week of rest and the knowledge that the Eastern finals went at least six games. They won’t be as deep as Toronto or Milwaukee, but they will definitely be fresher.

Here’s hoping Durant will suit up for the title series. If he sits, the next big news will be of the free-agent variety. There will be no end to the number of teams that are interested in his unique skill set. The Magic-Johnson-less Los Angeles Lakers want him. The horrible New York Knicks want him. The LA Clippers want him and of course, the Warriors’ ownership would love to sew him up for another four or five years despite video evidence of him and Draymond not having the best relationship.

If this is indeed the end of Durant’s run in the Bay, will he forever be known in some circles as the guy who couldn’t beat them, so he joined them. The best ending, if you’re in the Durant camp, is for him to come back, lead the Warriors to a three-peat and get ready for the super max offer. If he doesn’t play and the Warriors win anyway, the debate will be always be whether they really ever needed him in the first place.

The team was elevated with him, but their play of late shows that championship heart can sometimes overcome the loss of even a generational talent of Durant’s caliber. No one will disagree that took an already elite team into another stratosphere, but fair or unfair, he surely understands the growing belief that he needs to return and star in another another title run to completely validate his Golden State legacy.