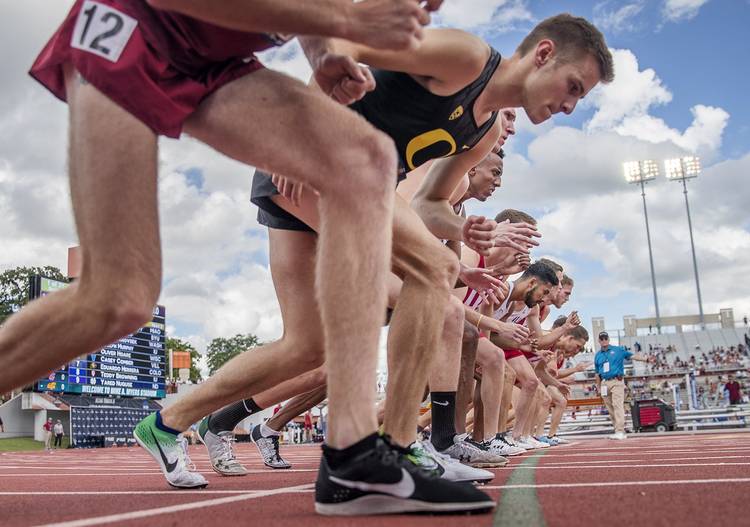 Athletes set to start in the 1500 meter race during the opening day of the NCAA Track & Field Championships at Mike A. Myers Stadium Wednesday, June 5, 2019. [RICARDO B. BRAZZIELL/AMERICAN-STATESMAN]

Wes Kittley found the best pair of sprinters he’s ever coached at pretty much the opposite ends of the earth.

The veteran Texas Tech coach located A.J. Hudson at high school powerhouse Cibolo Steele outside San Antonio. He spotted Divine Oduduru at a junior meet in Eugene, Ore. Everyone else discovered him there, too, when he won a silver medal at the world junior championship in the 200 meters at age 18.

“Everybody wanted him,” Kittley said. “We were all chomping at the bit to get him.”

Of course, Odurudu discovered America at about the same time.

But home for the phenom, who got his first notice internationally at the 2013 African Youth Athletics Championships, is from far-away and, for too many of the 191 million citizens in the West African nation, impoverished Nigeria. He came to Texas Tech, in part, because Kittley’s top assistant, Calvin Robinson, has a great reputation as a sprinters coach and trains Nigeria’s best female sprinter and long jumper, Olympic bronze medalist Blessing Okagbare, whom Kittley calls “the queen of Nigerian track.”

But Oduduru was also thrilled to be on college scholarship. And having three squares a day.

As the youngest of 10 children by a farmer in the most populous country in Africa, Oduduru grew up working on the family farm and often going hungry. He has already lost his father and a brother to premature deaths.

“Life was really tough,” he has said. “For everyone, it was a struggle to survive. We walked to and from school, and some days I didn’t eat. I was starving.”

College changed all that.

“He was so thankful,” Kittley said. “He lived in an apartment and got three meals a day. He’s had a rough life. That’s why he’s hungry.”

Still is hungry, but the 22-year-old Olympic sprinter who owns the fastest time in the world this year in the 100 and 200 meters is now on the world stage. With his burst on the scene and bubbly, infectious personality, Oduduru became an instant celebrity in Lubbock. His first name is actually Ejowvokoghene.

“He just has a great spirit about him,” Kittley said. “He’s always positive and smiling, and that spreads to the team.”

Oduduru, a junior who is on pace to graduate in December, set that standard when he was a semifinalist in the 200 meters at the 2016 Olympic Games in Rio and when he won both the 100 and 200 meters at the Michael Johnson Invitational in April with blistering times of 9.94 seconds — the fastest ever by a Red Raider — and 19.76. He duplicated that to a degree with the best times of 9.96 and 19.97 in Wednesday’s semifinals.

Not known for great starts, he compensates with long speed excellence. He reaches the 50-meter mark and he’s at full speed and maintains it. He’s short but very powerful. Hudson’s got better starts and has picked up his game.

Oduduru and Hudson, a senior, are pretty joined at the hip, their backgrounds notwithstanding. And they’ll be instrumental in Texas Tech’s drive to win the school’s first ever national championship in any men’s sport.

On Wednesday, the first day of the four-day NCAA outdoor track and field championships at Mike A. Myers Stadium, they paired up as the middle legs to finish second to Florida in their 400-meter relay heat and advance to Friday’s finals. Oduduru broke the 10-second mark again with a wind-aided 9.96 to win his 100 heat while Hudson finished sixth at 10.13.

“I think it was good,” Oduduru said. “I’m not really feeling any pressure. We just have to execute and get it right.”

“A.J. was one of the best sprinters in the nation out of high school,” Kittley said. “We were lucky to get him. Divine’s success has caused him to step up.”

They’ve pretty much been inseparable, and they definitely drive each other.

They often win together.

Hudson captured the Big 12 200-meter championship this season. Oduduru won that event during the indoor season. In that same MJ Invitational where Oduduru wowed, Hudson finished second in both events.

Kittley sometimes has to rein in Oduduru because he has such a strong work ethic.

His star is definitely rising, and no one should be surprised to see Oduduru on the medal stand in Tokyo next summer.

“He wants to better himself,” Kittley said. “Divine wants to make something out of his life.”

He’s off to a good start.