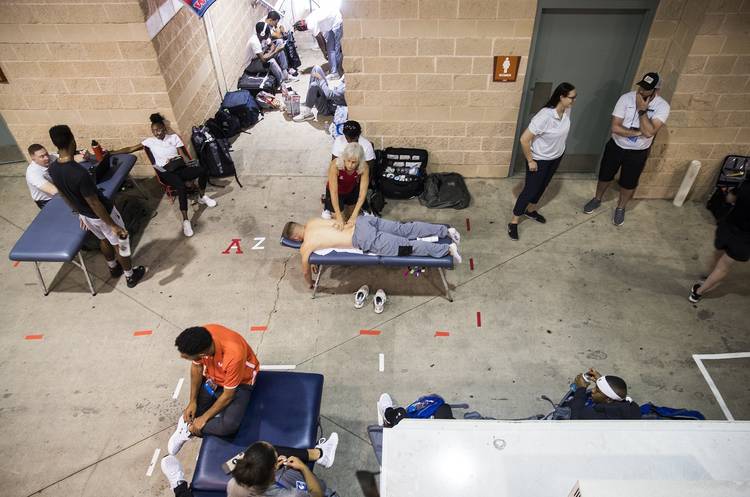 Athletes relax and get massages before they compete on opening day of the NCAA Track & Field Championships at Mike A. Myers Stadium Wednesday, June 5, 2019. [RICARDO B. BRAZZIELL/AMERICAN-STATESMAN]

For the 1,215 athletes in town, the NCAA outdoor championships not only represent a chance to make history, but also a chance to do so in a cool city. The athletes are here to win, but there isn’t anything wrong with having a good time between heats.

It’s Austin, after all.

Take Kentucky sprint relay teammates Dwight St Hillaire, Daniel Roberts, Jacob Smith and Nathaniel Bann, for instance. They are fast guys, but I guess speed of foot wasn’t enough during a downtown visit that included some good Tex-Mex when they got here.

“We’ve spent some time riding scooters around,” Bann said. “I’m not sure if our coaches know anything about that, but it was a fun way to get around down there.”

The Wildcats didn’t make it out of their semifinal in the 400-meter relay, but Roberts, a junior who was named the SEC’s runner of the year after winning the conference 110-meter hurdles, scooted his way to a meet-record 13.06 in his heat.

While Roberts and his fellow athletes are enjoying the city, they have to make sure and take care of their bodies in this summer heat, meaning words like nutrition, hydration, and stretching get thrown around quite often. Before they even make it over to Mike A. Myers Stadium, the area across Robert Dedman Dr. is the place where preparation will hopefully lead to exultation.

It’s not the Olympic Village, but the area underneath the east stands of Royal-Memorial Stadium is arguably just as important as what’s going on over in the track stadium.

A glance at the warmup area revealed a chillness that belied the 90-degree temperatures on the track. There were clusters of the best amateur athletes in the country. Some were texting. Others were in meditation mode. Then you had quite a few nodding their heads to music coming from their fancy Dre Beats headphones.

The running, jumping, and throwing is what fans come to see, but any track meet worth its salt has to have its act together when it comes to the welfare of the participants and Texas is well equipped given that its training staff caters annually to the 7,000- plus athletes that attend the Texas Relays every year and the scores of high school athletes that participate in the UIL state track meet each spring.

While many of the bigger schools brought trainers with them, others arrived in Austin without care providers. That’s where the UT staff comes in. Staff and student volunteers are on hand at Myers and the village to set up coolers, those hydrated cooling units affectionately called “water monsters” along with water and snacks.

And don’t forget the ice bags, compression boots, heat packs, and ever-popular ice tubs that are essential in this Central Texas weather.

“Our biggest worry is obviously the heat,” said UT assistant athletic director for sports medicine Adam Pecina. “Being that they are college athletes, they know how to hydrate. They’re at a level where they know what their body needs, but we’re still going to have situations where they’re going to run out of gas and overheat, so that’s why we’re here.”

While early rain threatened to throw Friday’s schedule into a tailspin, the skies cleared as the athletes arrived. The village was jumping as large SUVs and a few buses pulled up to drop off the stars.

“It’s nice here,” said Purdue sprinter Sam Colebrooke. “We hang out over there to get ready to compete. I remember coming here a couple of years ago and having a good time in Austin.”

And the good times kept rolling as Colebrooke and his 400-meter relay mates Tamar Greene, Justin Becker and Waseem Williams qualified for the finals.

Texas A&M sprinter Syaira Richardson, the SEC runner-up in the 400 — her time of 51.17 is the fifth-fastest in the country — is also part of the 1600-meter relay that won at the Texas Relays, so she is no stranger to the village. The Suffolk, Va., native transferred from Ohio State after her parents moved to Dallas. While the heat is still something she’s becoming accustomed to, competing against the best in the country has her excited for Friday’s prelims.

“I like coming here to compete, plus the city is cool,” she said. “We went out to eat at the Oasis out on Lake Travis. It was nice to be out on the water.”

As for the exciting weekend at hand, the crowds will come and the medals will be won. But for a successful meet to happen, it takes a village.

Better yet, a carefully maintained village.