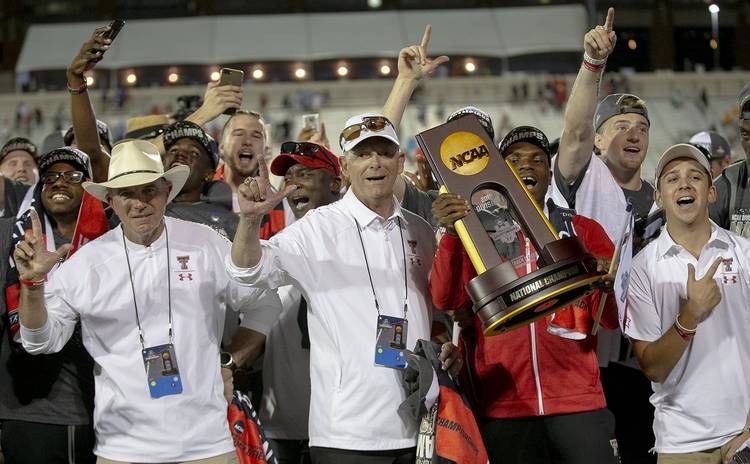 He got hooked on the sport as a third-grader.

Wes Kittley was a wide-eyed 8-year-old when he expressed interest in the County Days athletic contests held in Paint Creek not far from his hometown of tiny Rule north of Abilene.

Competitors ranged from sixth to eighth grade, but Geraldine Poole saw something special in the son of cotton farmer Bobby Kittley, so the third-grade teacher instructed little Wes to climb on the bus and don’t ask questions.

He did just that and held his own against older kids in dashes of 50, 75 and 100 yards and softball throw on the football field and won several ribbons for winning events like the chin-up. The ribbons?

“I still got ‘em in a box,” he said proudly decades later.

He’s got something else to put in that small metal box now.

On a muggy Friday night at Myers Stadium, Kittley’s Texas Tech men’s track and field team topped Florida by 10 points and won the first national championship for any men’s sport in school history. That’s ever, not counting the school’s 13 meat-judging national titles. I’m not making that up. Meat cleavers up.

And that’s just the tip of an iceberg that could threaten to capsize some of the traditional powerhouses in college sports. And not just in track where the Red Raiders out-dueled powers like Florida, Houston, Georgia, Stanford and LSU.

Texas Tech track has arrived. Or at least reached its intended destination, matching the Sheryl Swoopes 1993 women’s basketball team with the only other team crown in school history.

“It feels amazing,” athletic director Kirby Hocutt said. “Even better than I thought it would.”

Tech track is still going places, same as nearly every other sport on the west plains these days.

In short, Tech is crushing it.

“It’s been a fun year,” Kittley said. “We had a target on our back all year. We’ve never done it before. Baseball’s really killing it. And I watched Chris Beard’s team almost win it all in the Final Four.”

Raider Power is no longer just a school chant.

In basketball, Beard’s program is on its way to another stratosphere after reaching the Elite Eight in 2018 and taking No. 1 seed Virginia to overtime before falling in April’s national title game. In baseball, Tim Tadlock’s bunch won the Big 12 for the third time in four seasons and is within one victory of a fourth College World Series in six years if it can beat Oklahoma State one more time in a super regional they’re hosting.

An argument could be made they are the best three coaches in the conference in their sports. This school year, Tech got four Big 12 titles, way behind Texas’ nine, but are wowing in the spring.

“He’s going to do it,” Kittley said of Beard’s title plans. “And so’s Tadlock.”

Hocutt deserves a ton of credit for directing one of the fastest-rising athletic departments in the nation. As for Kittley, he was nominated this week as one of 20 on the Texas Sports Hall of Fame ballot.

“There’s an attitude that permeates the entire athletic department,” Hocutt said. “We have a confidence that we’re as good as anybody. Wes believes Texas Tech can be the best in the country, and he’s always believed that.”

Football’s struggling at the moment, but favorite (but fired) son Kliff Kingsbury landed on his feet in the NFL, and hopes are high for new Texas Tech head coach Matt Wells, a six-year head coach at Utah State whom one well-connected person described as a Mack Brown starter kit with charisma and compassion spilling out of his pores. “If there’s a full room,” he said, “Matt will shake every hand in that room.”

It’s good to be a Red Raider these days.

That’s especially true for Divine Oduduru who won the impossible 100-200 combo and set an NCAA meet record in the latter. “I think he’s the greatest of all time,” Kittley said.

When the Nigerian junior wasn’t excelling in those sprints, he teamed up on Tech’s third-place 400-meter relay squad. Eric Kicinski won the discus, Norman Grimes Jr. held on for second in the 400 hurdles, and Odaine Lewis scored with a sixth place in the triple jump.

Kittley has been a track fanatic almost from the moment his grandfather Ollie took him to the Rule track as a 6-year-old, and Wes was allowed to jog with the athletes. “I thought I was big-time,” he said.

He would be. Eventually.

While all three of his brothers won the state 800 meters championship, he did not. He did run a leg on a first-place relay team at state, joining with one Art Briles to beat a Big Sandy squad that included David Overstreet and Lovie Smith. Briles would also run a 9.9 in the 100-yard dash to break a record Wes’ dad owned for 22 years.

A year ago, Tech put the finishing touches on a $50 million indoor track/football facility with high-bank ovals and sliding doors that can be opened to create a terrific atmosphere. Kittley’s so proud of it, his team stayed home seven consecutive weeks and drew outstanding teams like Arkansas and USC to Lubbock to the arena, which can pack in 3,000 fans.

“That’s my baby,” he said. “It’s one of the finest, if not the finest, in the country. In four years, anyone will be able to bid on hosting an indoor national championship, and I’m hoping we can.”

Kittley’s come close to a title before, finishing fifth a year ago after a 38-point opening day but a Tech sprinter was disqualified in a race, and a hurdler knocked off the first obstacle and fell down in his final. Tech was one point out of fourth and two out of third.

He’s finished in the top five an amazing six times. But then, he’s no stranger to success.

Kittley won a few titles at his last job at Abilene Christian.

“Yeah, we won 29 national championships there,” he said, almost sheepishly about a number that puts him just three behind Kenyon College swim coach Jim Steen for the most all-time in any division. “I had a decent run.”

The run continues. And that box is getting fuller by the day.