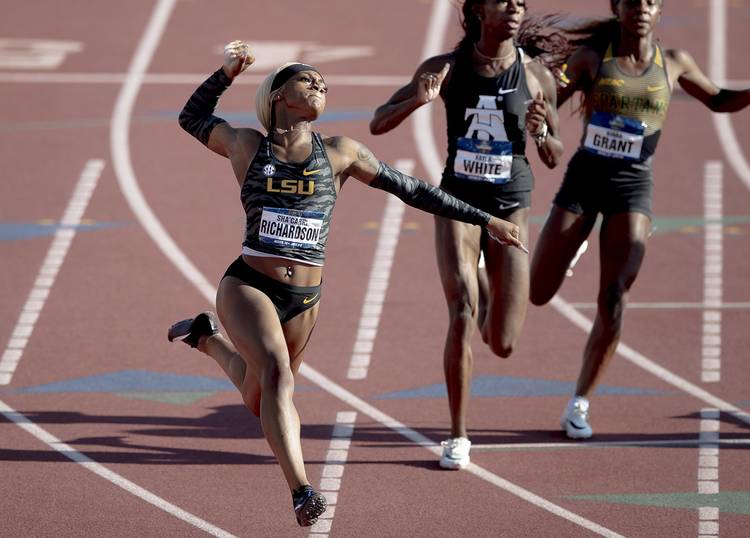 Sha’Carri Richardson had one busy Saturday.

And faster than most as well.

That’s to be expected from a young woman who was the No. 1 sprinter recruit in the nation in 2018 and is flirting with becoming one of the best female sprinters to ever come out of Texas.

But she was smart enough not create any specific expectations beforehand.

“I never give myself a certain time (to hit),” Richardson said, “because when you do that, you limit yourself.”

This talented LSU freshman may be beyond limits after setting two U20 world junior records.

To climax her initial college season, the flamboyant Richardson electrified a big crowd at Myers Stadium on a steamy Saturday when she bolted to a new collegiate record with an astounding 10.75-second time in the women’s 100 meters on the final day of the NCAA outdoor track and field championships. She easily broke a 30-year-old mark set in 1989, winning by several strides over North Carolina’s AT&T’s Kayla White.

Oh, she also anchored a blazing Lady Tigers 4X100 meter relay to a second-place finish behind USC, and if that weren’t enough, the terrific rookie from Dallas Carter was nipped at the finish line by USC’s 200-meter defending champion Anglerne Annelus, losing by one hundredth of a second on the Trojans’ late lean. She scored 18 points herself and had a hand in 26 of the Lady Tigers’ 43 points for third place overall.

But Richardson’s blur in the 100 was spellbinding. Even for her coach.

“To be honest, I was a little bit shocked by her time in the 100,” said LSU head coach Dennis Shaver said. “But we’ll take it. The fact that she broke another LSU girl’s record, Dawn Sowell, that she’d held for so long is pretty exciting. Nothing surprises me about her.”

Richardson credited her faith in God, a powerful body she’s blessed to have and support from as many as 10 in her personal fan group including her mother, godparents and former coach who made the trip from Dallas.

She unabashedly said she had the words God-gifted tattooed in script on her right shoulder and frequently quotes Scriptures on her personal Twitter account that has more than 15,000 followers.

“I accept pressure,” she said. “I feel it elevates me.”

Teammates and rivals rave about her flair as much as they do her speed. She became the first U20 woman in the world to post a sub-11 and sub 23.4 time in the 100 and 200. The top three NCAA 100 meter sprinters in history, now including Richardson, have all run at LSU.

“I think she is an amazing girl,” said USC’s Chanel Brissett, who started off the Trojans’ winning 400-meter relay team that turned in the fastest time in the world this year at 42.21 seconds. “A freshman? That’s phenomenal.”

Kentucky junior Chloe Abbott, who came in second in the 400 meter run, was astonished by how Richardson has exploded on the track scene.

“She’s doing what people who are grown don’t do,” she said. “And I like that she’s very humble. She’s a character. She always has great hair, whether it’s blonde or brown. And that 100 time. Oh my God. That’s just wild.”

For the record, she was a platinum blonde for this track meet.

“I ran well in the Texas Relays this year as a blonde,” said Richardson, who also wears two small gold nose rings and a tongue stud. “I brought the blonde back. This had a homey feeing to it.”

LSU hopes to bring her back to campus, no matter what her hair color. This grounded young woman with pink fingernails trimmed in blue and a body that is sculpted will have options, but she was in no hurry to make any decisions.

Longhorn fans were sorry about the one she made a year ago when the three-time 100-meter state champion chose Baton Rouge over Austin despite a record of success at Myers Stadium.

Asked why she left the state, she said, “I’ve lived in Texas all my life, and I just wanted to try something new.”

Shaver will be looking for new ways to motivate her. Richardson’s power and acceleration set her apart, but he can see improvement in her already efficient style, especially in the first 30 meters of her races.

“She’s young but such a furious competitor,” Shaver said. “I was a little surprised she was so strong in the 200 because it was her third event of the day.”

Her sensational performance didn’t go unnoticed by anyone.

Texas A&M’s Jazmine Fray, who won the 800 meters in her final collegiate race as a senior, couldn’t help but be impressed.

“She’s on fire,” Fray said. “Yeah, the pressure will be on her from now on, but life is pressure.”

But Richardson already seems to have a pretty good grasp on perspective. She loves running track, hanging out with friends and in fact even admitted to having one glaring but hardly obvious weakness.

Asked to name her favorite cuisine, she kiddingly said that was a trick question, but added she leans toward spicy foods, not that any of it shows.

“Yeah,” Shaver said, “but her metabolism isn’t the same as yours or mine.”

Bohls: Texas’ sports year was (a) outstanding (b) awful (c) somewhere in between