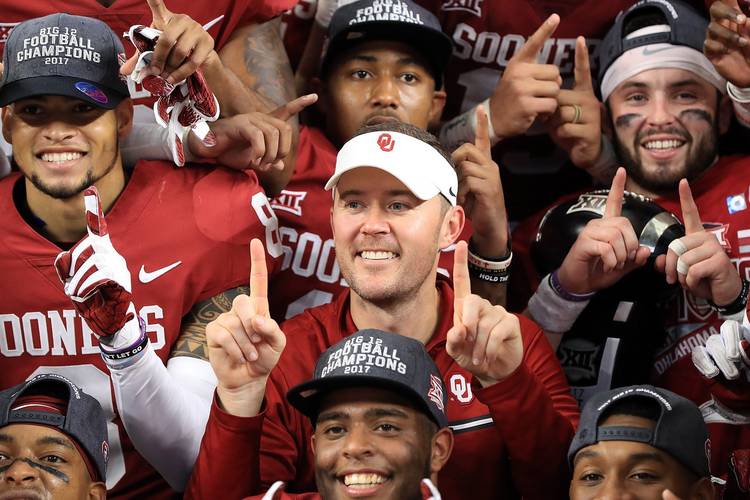 ARLINGTON — Mike Gundy had it pegged.

Asked how Oklahoma has possibly managed to dominate the Big 12 the last four seasons running, the flamboyant Oklahoma State coach said, “The last couple of years, they’ve had average quarterback play, and they’ve overcome it.”

And now it appears OU could go 3-for-3 with Alabama transfer Jalen Hurts poised to keep the assembly line rolling. What else is new?

You want to hear the weather report in Soonerland?

Great quarterbacks fall from the sky in Norman. It’s been a blizzard as OU has gone from unrecruited walk-on Baker Mayfield to unhappy Aggies transfer Kyler Murray to tired-of-Tua Jalen Hurts.

In fact, Lincoln Riley needs an umbrella from the deluge because it’s been raining quarterbacks there for a while now. And that’s led to an undeniable dominant reign.

Asked if other coaches give him grief for super quarterbacks falling in his lap, Riley chuckled and said, “Not really. I think they respect how these guys have played.”

I imagine. Murray’s numbers were every bit as potent as Mayfield’s, and now OU has another dual-threat quarterback who has already won a national championship with a 24-2 record as a starter at the premier program in the country while completing 73 percent of his passes. And he’s got wheels — an XL-sized Murray, if you will.

Hurts didn’t make the trip to Big 12 media days on Monday and hasn’t won the job yet, but he’s the odds-on favorite over redshirt freshman Tanner Mordecai and true freshman Spencer Rattler.

“He’s going to be a play-maker,” stud wideout CeeDee Lamb said of Hurts. “He’s very intelligent, and the guy’s pretty big. Can we be as good as last year? I feel we can, if not better.”

So it may have caught Riley off guard when a reporter assumed his offense would take “a dip” in 2019 with the loss of Murray, wideout Marquise Brown and four of the five starting offensive linemen to the NFL.

“We don’t plan on the offense dipping,” he said. “We definitely expect our defense to be better.”

Can it be any worse than last season, when the Sooners’ defense ranked 114th? Riley fired defensive coordinator Mike Stoops and brought in Ohio State star Alex Grinch to change the culture on that side of the ball. The Sooners do return eight defensive starters, but is that necessarily a good thing?

Kenneth Murray says so. The junior middle linebacker so believes in the Grinch who will steal back Christmas for the Sooners that the OU defense will adopt “a hunter’s mentality” on that side of the ball.

It will need to if it is to upgrade that defense, which basically cost the team a shot in the College Football Playoff championship game with a disastrous second half and double-overtime loss against Georgia two years ago and then a 28-0 deficit against Alabama this past January.

That said, OU is probably the best program not named Alabama or Clemson at the moment. Given Riley’s magical hand and the quarterback prosperity, the Sooners look to stay on top in the Big 12. Their 12 conference championships are nine more than runner-up Texas. The nine other league programs have produced a scant nine total titles among them.

OU has won the league the last four years and has dropped just three of its 37 conference games during that period. Before that, not so much. Between Big 12 titles in 2008 and 2015, six different schools won or shared a league crown, but that’s stopped.

Since Bob Stoops hired Riley as his offensive coordinator and Riley then succeeded his boss, the transition has been seamless. Riley has owned the league and earned CFP berths each of his first two seasons as head coach.

So is this a good thing or bad thing for the league?

With all due respect for all things Longhorns, I’d say a good thing. Of course, Texas’ mastery of the Big 12 would be equally good. The big dogs have to eat. The Big 12 will always be perceived as strong or weak, relative to those two teams’ standings.

Alabama runs things in the SEC, Clemson in the ACC. Ohio State controls the Big Ten. There’s an obvious vacancy in the Pac-12.

Oklahoma remains the one constant. About the only thing that could rob its immediate momentum would be poor offensive line play, continuing defensive slides or the allure of the NFL for Riley. Or they quit playing high school football in Texas; this state remains a recruiting hotbed for OU — “our second home,” Riley said — which has landed 29 Texas recruits the last three years.

Do others perceive this positively or negatively, Sooners’ perspective notwithstanding?

“I think the better the competition, the better our conference,” Big 12 commissioner Bob Bowlsby told me. “They’ve got a great tradition. They have outstanding student-athletes. They’re going to be good all the time. Those are positive things.”

And Bowlsby added, “All but six possible first-place votes (in the preseason media poll) went to them, so obviously y’all think they’re going to be pretty good, too.”

Les Miles knows a thing or two about the value of playing with a conference kingpin. He’s, uh, been there.

“It gives you a national spotlight and it puts somebody in the playoffs,” the new Kansas coach said. “If Oklahoma can remain strong and other conference teams can rise to their level, you’ve really got something.

“As for Alabama’s greatness, it’s a good news-bad news. If you beat them, you’ve got a great chance to play for the title. If you don’t, you’re not.”

Pretty simple formula. OU’s rivals should just pray a Heisman-caliber quarterback shows up on their doorsteps, too.

And even Gundy acknowledged that OU’s been so successful, that “somebody’s got to take it from them.”

Either that, or the Sooners have to finally play with a truly average quarterback.

Bohls: Slam Sam Ehlinger at your own risk — it’s exactly what Texas wants

Golden: Now in Lawrence, Kansas, how many coaching Miles does Les have left?