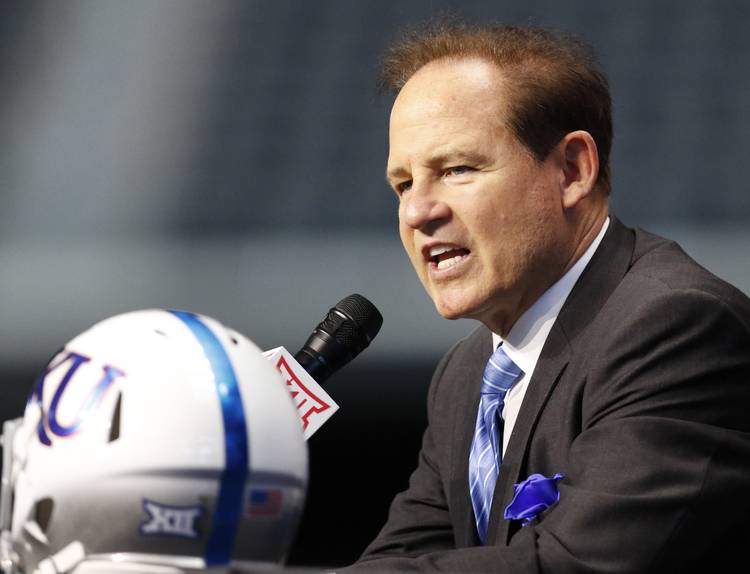 ARLINGTON — Les Miles had to come back.

He had no choice.

Once a coach, always a coach.

The bug is the most tempting of mistresses. Just ask Oklahoma legend Bob Stoops, who took a job in the new XFL after spending the last two years on the golf course. Just ask Stoops’ former nemesis Mack Brown, who is returning to North Carolina after serving as an ESPN studio analyst for the last five years.

Miles, 65, made no secret of his desire to return to coaching. So when KU athletic director Jeff Long called, he was ready.

“I don’t think I’ve ever felt better in my life than when I took a team to the field,” Miles said Monday at Big 12 media days. “For me, it wasn’t ‘stay home to be with the family.’ It was go get yourself a good job, go out there and go win some games and we will be right alongside, and that’s one of the reasons.”

Miles couldn’t stay way despite doing a bang-up job of staying busy since LSU fired him four games into the 2016 season. He and daughter Smacker — a former Longhorns swimmer — collaborated on the “Les is More” podcast on The Players’ Tribune. Miles also dabbled in acting, having appeared in several flicks, including playing a cop in 2017’s “Camera Obscura” and a NASA employee who fatally pushed for liftoff in 2019’s “Challenger Disaster.”

It was all busy work, but not the kind of work that got his blood pumping.

Miles’ latest undertaking is unquestionably a challenge that just might lead to disaster.

He signed a five-year, $13.8 million contract with the full knowledge that the seven coaches who preceded him in Lawrence  won a grand total of 87 games over 21 seasons. Only three times did a Kansas team finish above .500, all under Mark Mangino, who went 50-48 over eight seasons. To say Miles has his work cut out for him would be the mother of understatements. He knows the history in Lawrence and he knows the odds are beyond stacked against him.

But it’s what he does. Coaches coach until they can’t coach anymore. No one knows how many Miles this Les has on the old odometer, just that he was willing to make his way to  football wasteland to take his swing.

Miles, a longtime media darling who doesn’t receive nearly as much respect for getting Oklahoma State back on track before he won a national title at LSU, was sporting his 2007 national championship ring during Monday’s breakout afternoon interview session. The morning was spent answering questions about his ability to adapt to an offensively-based Big 12 after spending more than a decade in the ground-and-pound SEC and his handling of running back Pooka Williams, who was given a one-game suspension after he reached a domestic violence diversion agreement with local authorities after an incident with an 18-year-old woman seven months ago.

Miles seemed a bit weathered during a day that included numerous interview commitments and the general hubbub that comes with media days, but he’s back where he wants to be. He already raised some eyebrows in Stillwater when he said the group returning in Lawrence is better than his first Oklahoma State team in 2001. That’s big talk since that roster included some good young players in Tatum Bell and Rashaun Woods — both of whom played in the NFL — and quarterback Josh Fields, who went on to play parts of five seasons in Major League Baseball.

It should also be mentioned that his first OSU team went only 4-7 but sent shockwaves through college football with a 16-13 upset of No. 4-ranked Oklahoma to close out that season. Miles followed up with a 38-28 win over the third-ranked Sooners the next year.

There will be ample opportunities to pull upsets now. The Jayhawks will be the underdogs in most every game expect for the opener against Indiana State.

“He has a lot of gas left in the tank,” senior lineman Hakeem Adeniji said. “He may have more energy than I do, and I’m 21.”

While his final days at Baton Rouge came with charges that the game had passed him by because of a run-first mentality that used to get it done on the regular in the SEC, Miles, with his 142-55 career record and seven 10-win seasons, has to understand that he’s now in a league where teams that can’t throw are likely to be out of the game by halftime. He has had two years to formulate a plan that will at least make the Jayhawks more competitive than they have been, and that Les Miles in 2019 isn’t a dinosaur but a renaissance man with a whistle around his neck.

The Big 12 is more fun with more personalities on the sidelines.

Lawrence just got more interesting. In football, no less.

Bohls: And, just like that, Oklahoma lands another great quarterback castoff to lead the way

Bohls: Texas’ young defense will be the key to the program’s continued ascension