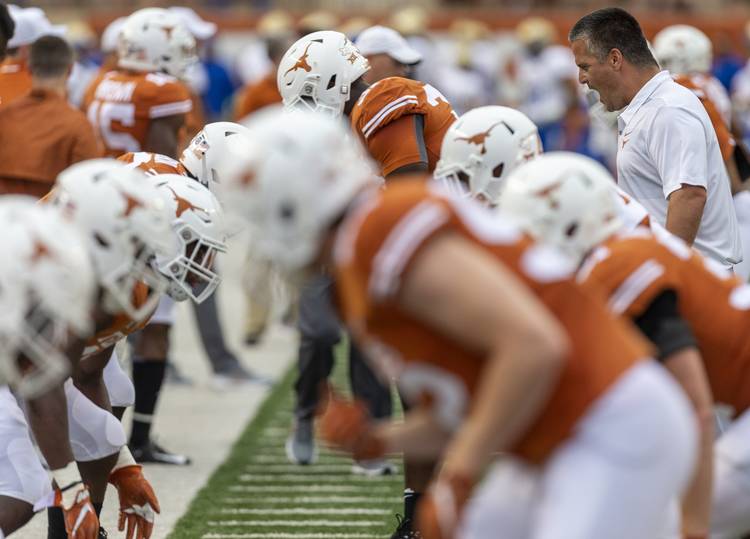 ARLINGTON — Like any smart coach interested in defusing outrageous expectations from the hungry fan base and the ever pesky media, Tom Herman recalled on Tuesday that success doesn’t always come instantaneously.

Dabo Swinney, for example, won his first national championship in his seventh year at Clemson, Herman pointed out, and Mack Brown did the same at Texas.

He was off by one.

They didn’t claim their first titles until their eighth seasons. And you could even say it took Swinney nine since he became the Tigers’ interim head coach in midseason one year.

This is Year Three for Herman in Austin. After two winning seasons, he’s just getting started.

So he wasn’t saying it might not be until 2024 that his Longhorns can win it all and claim the school’s fifth crown. It can be done sooner.

There are examples of early glory like Bob Stoops, who won his only title in his second year at Oklahoma. Heck, Terry Bowden became the first coach to go undefeated in his debut season at a Division I school when he started 11-0 at Auburn in 1993. That said, he didn’t even last five full seasons after that, resigning under fire in midseason of 1998.

Herman did say he thought the program was on track and trending in the right direction, which it is. A 10-4 season and an invigorating Sugar Bowl win over Georgia are testament to that. But fixing an erratic defense that ranked 110th against the pass nationally and struggled mightily in fourth quarters will be the best way to hurry along Texas’ first title since 2005.

“We need to make improvements on defense,” Herman said Tuesday at Big 12 media days. “We have recruited very well on that side of the ball.”

So how far away is Texas from having a championship defense?

That’s an eyebrow-raiser although the junior leader rebounded and said he had the utmost faith in defensive coordinator Todd Orlando and his staff. Of course, Ehlinger might have been thinking back to last year, when Texas was outscored in all but two fourth quarters and outpointed 148-66 in the final period.

The defense had its moments. It sealed close wins over USC, Oklahoma, Kansas State, Oklahoma State, Baylor and Texas Tech but it often withered in awful fourth quarters against the Sooners twice, Red Raiders and even the Kansas Jayhawks as Texas held on for victory.

Could it have been a lack of conditioning? “Nah,” shrugged defensive end Malcolm Roach. “We’ve got the best strength coach in the country.”

Yeah, but as good as he is, no one’s concerned if Yancy McKnight is in shape.

The defense may not have to be exceptional for a great season, but it can’t be a liability either.

He’s right. Oklahoma reached the College Football Playoff semifinals the last two years despite a horrendous defense. But again, it didn’t win it all.

So the cavalry is on the way. That said, it needs to be because Texas returns just three defensive starters — outstanding safeties Brandon Jones and Caden Sterns and Roach — after losing its starting two cornerbacks, its starting two linebackers and the entire defensive line. Probably even the GA who tracks defensive snaps. Seven of the top nine tacklers from last season are gone.

“We’re going to be young. There is no secret to that,” Herman echoed. “But young and talented is better than young and not talented.”

Even then, Herman suggests too much is made of a simplistic stat of returning starters. That doesn’t allow for backups that play a lot of minutes, often at crunch time.

When asked which of his defensive players figure to be playmakers this fall, Herman said, “I hope all of them.”

Jeffrey McCulloch has played a bunch. So has Gerald Wilbon. Linebacker Joseph Ossai led the team in tackles in the Sugar Bowl. Ta’Quon Graham is reliable up front. Cornerback Chris Brown tore it up in the spring. Watch out for Anthony Cook in that secondary. B.J. Foster is a hitting machine. DeMarvion Overshown’s star is on the rise in the defensive backfield.

None was a full-time starter but they still started 18 games among them. So they’re hardly bereft of experience.

“We’re probably a bit ahead of schedule, to be honest with you, in terms of getting us back to consistently being where we expect,” Herman said. “But I do think there is an element of patience.”

He’s probably right, except for maybe the patience part. Even if it did take Swinney and Brown eight years.

Golden: Now in Lawrence, Kansas, how many coaching Miles does Les have left?