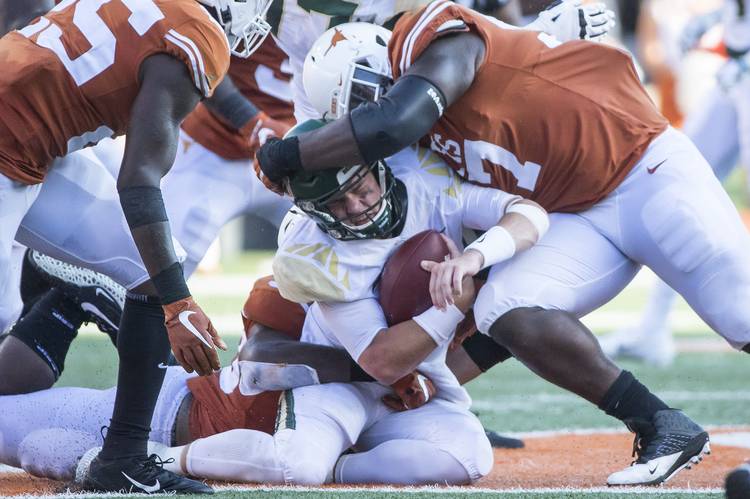 ARLINGTON — Former Texas coach Mack Brown would always come up with some catchy slogan before every season.

In 2005, he used “Take Dead Aim,” which was an ode to golf coaching legend Harvey Penick. The Horns took aim at a return trip to the Rose Bowl and walked away at season’s end with the national championship.

Baylor’s Matt Rhule may not be into fancy bracelets and eye-catching mission statements, but if he was, I’d drop this one into his 2019 suggestion box:

Quarterback Charlie Brewer was sacked 39 times last season, and the Bears have led the conference the past two years in sacks allowed. Brewer is an emerging playmaker and a tough guy to boot, so  some of those sacks can’t be placed at the feet of the offensive line but rather on the quarterback’s intense desire to try and make something happen even under dire circumstances.

Rhule has to figure out how walk that fine line between the high risk/high reward part of Brewer’s game and the realization that the junior getting knocked out for an extended period of time could bring Baylor’s return to respectability — the Bears went from one win in 2017 to seven wins in 2018 — to a screeching halt.

“We’re probably always going to have a few more sacks than we should because of the way that Charlie plays,” Rhule said Tuesday at Big 12 media days. “When I was in the NFL I did a study, and Aaron Rogers had a bunch of sacks, but it was because he was going to get out of the pocket and scorch you. So he would take a sack. I tell Charlie to slide and he slides right into the guy. When I tell him to get out of bounds, he stops. He is going to play that way and that’s what makes him beloved by his teammates.”

Brewer has plenty in common with Texas’ Sam Ehlinger, his former high school rival. The Lake Travis-ex plays with single-minded toughness and just like Ehlinger, he doesn’t mind a little open-field contact. But every scramble becomes a hold-your-breath moment for Bear Nation. Brewer carried the ball 133 times for 390 yards last season, with 109 of those coming in the 45-38 win over Vanderbilt.

To take away his scrambling would be to take away from his game, so Rhule and offensive line coach Shawn Bell — a former Baylor quarterback himself who once led the Bears to an overtime upset of Texas A&M — spent the spring retooling and cross-training the offensive line that was decimated by injuries down the stretch, giving up nine sacks in its last three regular-season games. Right side starters Blake Blackmar and Patrick Lawrence are gone, creating a void on Brewer’s front side. Former Clemson transfer Jake Fruhmorgen struggled with consistency last season but will get a look at guard and center, though it’s likely that Sam Tecklenberg will be the full-time center, a spot he has occupied the last two years.

The Bears are much more stable on the left side, where 6-7, 297-pound Connor Galvin and 6-2, 307-pound Xavier Newman should hold it down.

“We’ve got to make pass (protection) a big emphasis and we have all offseason,” Tecklenberg said. “We’ve spent more time than we had in the previous years.  So, just repetition, practice film study — we’re in there all the time  — fixing a lot mental errors, and harping on technique.”

Mack always said that a good offensive should have plenty of depth across the board to combat injuries to the most violent part of a football field. Rhule is working toward that end.

“I think we’re at the point where we have seven to eight guys that we think can play for us at a high level,” Rhule said. “That to me is the number; you want three tackles, three guards and two centers, and if you have eight guys then you have a chance to be whole. I think we’re there. (Tecklenburg) is 310 pounds now. He played his first year at 280. (Galvin) is 300 pounds now and we have a bunch of guys that put in their time and hopefully we can go out there and get that number way down.”

Offense rules these days in the Big 12, where two of the worst defenses in Oklahoma school history still appeared in the College Football Playoff in consecutive seasons. To steal a line from MLB great Reggie Jackson, Brewer is the proverbial straw that stirs the drink.

Keep him clean and Baylor football will continue its upward surge.

Bohls: Texas’ young defense will be the key to the program’s continued ascension

Eyes on Texas: What does being ‘back’ even mean these days for the Longhorns?