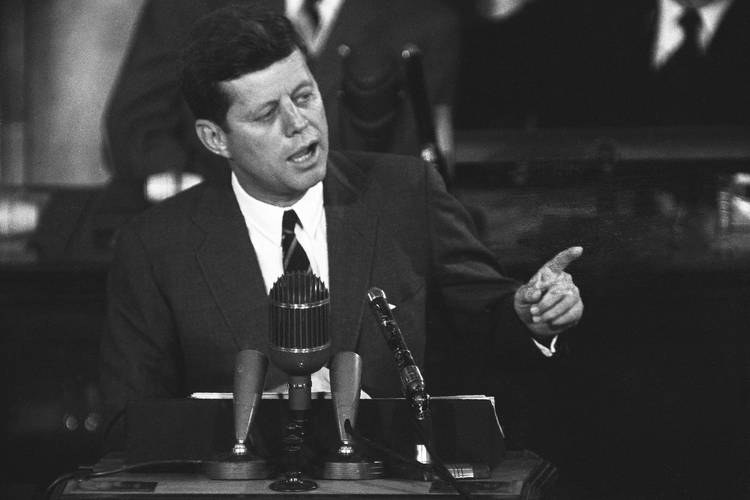 In this May 25, 1961 file photo, President John F. Kennedy speaks before a joint session of Congress in Washington, urging congressional approval of additional funds to bolster space, foreign aid and defense programs. "I believe this nation should commit itself to achieving the goal, before the decade is out, of landing a man on the moon and returning him safely to Earth." (AP Photo)

For my money, July 24 is a more important day to celebrate than July 20.

Prior to wrapping up this 50th anniversary celebration, let’s pause to remember the inspiring role of football, specifically University of Texas Longhorn football, in putting Americans on the moon. Let’s also remember a time when presidents had vision beyond what they see in a mirror and the kind of sense of humor that can bring laughter that makes us think.

President John F. Kennedy set the tone and the challenge for the moonshot in a Sept. 12, 1962, speech in Houston at Rice University’s stadium. NASA calls it the “John F. Kennedy Moon Speech” and has it archived on its website.

At a time when some questioned the worth and wisdom of a space program, the young president showed us the way and the why.

“We set sail on this new sea because there is new knowledge to be gained, and new rights to be won, and they must be won and used for the progress of all people. For space science, like nuclear science and all technology, has no conscience of its own,” he said. “Whether it will become a force for good or ill depends on man, and only if the United States occupies a position of preeminence can we help decide whether this new ocean will be a sea of peace or a new terrifying theater of war.”

He then worked his way toward football and one of the great one-liners in the history of two sciences: political and rocket.

“There is no strife, no prejudice, no national conflict in outer space as yet,” Kennedy told the 40,000 people in the stadium. “Its hazards are hostile to us all. Its conquest deserves the best of all mankind, and its opportunity for peaceful cooperation may never come again. But why, some say, the moon? Why choose this as our goal? And they may well ask why climb the highest mountain? Why, 35 years ago, fly the Atlantic?”

And then, football: “Why does Rice play Texas?”

In five words rooted in the notion that perhaps David didn’t see himself as a long shot with a sling shot versus Goliath, Kennedy captured the essence of challenge, of underdogs and of how long shots relate to moonshots. And he did it in terms Texans — and lesser football fans — understood.

We made it to the moonon the 20th day of the seventh month of the last yearTHAT WOULD BE 1970 of the decade in which JFK said we’d get there. So sad it was that he was not around to see the realization of the dream he dreamed for the nation.

So sad that he was killed in the state where he had shared that dream aloud.

And so sad that Rice no longer plays Texas every year as the two schools did when they were both in the old Southwest Conference. The Owls and Horns have played 94 times since the first game in 1914, a 41-0 Texas win that probably wasn’t as close as the score indicated.

Uncharacteristically, Rice had won five of the nine games in the years prior to the speech.

On Oct. 27, 1962, an undermanned Rice team, en route to a two-win season, tied Texas, then No. 1 in the nation, 14-14 in the stadium where JFK had spoken six weeks earlier. It was the only game UT didn’t win that season prior to a 13-0 loss to Louisiana State University in the Cotton Bowl.

That’s why Rice plays Texas. And it will accept the challenge again Sept. 14 at Houston’s NRG Stadium.

Eyes on Texas: What does being ‘back’ even mean these days for the Longhorns?