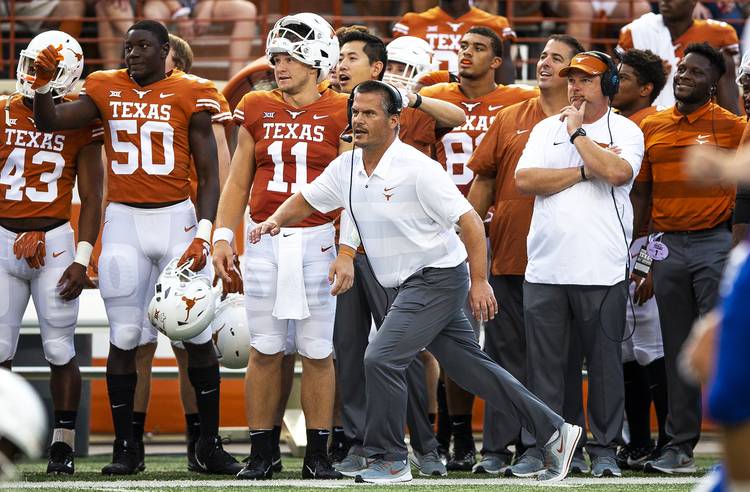 “I know there’s going to be a lot of questions about inexperience,” UT defensive coordinator Todd Orlando said earlier this week in Houston.

Only two of those were drafted. Defensive end Charles Omenihu was taken in the fifth round and cornerback Kris Boyd was a seventh-rounder. OK, that doesn’t sound so bad.

“Like I say all the time, you can’t re-sign guys,” Orlando said.

Of all these new-ish Longhorns, none are greenhorns. Those paying attention are familiar with Jeffrey McCulloch, Ta’Quon Graham, D’Shawn Jamison and Jalen Green. It’s Keondre Coburn’s time to shine, along with Ayodele Adeoye.

“I think you’re going to see speed that’s at probably a different level than what we’ve had around here,” said Orlando, not known for being a hype man.

Yes, losing eight starters sounds bad. But looking at the totality of who Texas lost, who the Horns have coming back and weighing that with this coaching staff’s track record for development, the defense is probably going to be just fine.

No journey is easy, obviously. “Now, where that speed goes, I don’t know?,” Orlando said. “It’s one of those deals. But I know that we’re more athletic. I know that we have some elite athletes out there, but what I don’t know is how we all come together.”

This time last year, nobody pegged Omenihu to be the next Big 12 defensive lineman of the year. Few thought Sterns, aka “The Wolf,” would be as special as he was. The guess here is Roach would’ve had a truly impressive season if not for that foot injury.

Texas had the fourth-best scoring defense in the Big 12 last season (25.9 ppg). If you’re not scoring at least 30 points per game, your team probably isn’t competitive. Same is true for the defense. Holding teams under 30 is critical.

But the Horns were saggy, if not downright sloppy, in the fourth quarter. Opponents outscored Orlando’s troops 148-66 in fourth quarters last season. Hard to close out games when you’re literally getting doubled up at closing time.

Texas’ opponents also kept drives alive, too. The Horns ranked seventh in opposing third-down conversions (44.3 percent). The defense’s inability to get off the field made a world of difference in losses to Oklahoma State and West Virginia. Baylor might have won in Austin had the end zone been 1 or 2 yards longer. Lil’Jordan Humphrey saved the day in Lubbock, too.

So it’s not as if Texas lost a slew of Hall of Famers on defense. And it’s not as if the replacements are stepping into new roles. They are merely expanded ones.

Orlando doles out playing time in percentage terms. But first, you must be among the top 11 players on the unit, regardless of position.

He will ask defensive line coach Oscar Giles for his top three or four players. Orlando himself will judge the top three or four linebackers. Then, he asks secondary coaches Jason Washington and Craig Naivar for their top four choices in the secondary.

Every player is ranked, and then the coaches assemble a lineup that maximizes their top 11 defenders. “Who are your top three guys, then numbers 4, 5, 6,” Orlando said. “They’re going to get 85 percent (of the plays).” Players who rank seventh or eighth at their position “may get four or five plays a game.”

The list has already taken shape due to spring performances. After the first two weeks of August practices, the list is essentially finalized.

“I would expect us to have by week three, hey listen, this is our top 11, this is (number) 12 and 13,” Orlando said. “We need 26 guys to go to this freaking party every time we line up on Saturday, and this is our crew.”

Orlando didn’t hesitate when asked who was replacing Chris Nelson at defensive tackle. “We’ve got some older guys with it, but if I’m going to be really, really honest with you, I think Coburn’s the guy,” Orlando said. “He gives us the ability to move his feet. He’s very, very quick, very, very fast. Now, it’ll come down to how many plays can he play.”

Roach will get one defensive end spot, and Graham gets the first crack at playing on the opposite side.

“We’ve been waiting on TQ,” Orlando said of the junior from Temple. “We’ve never made guys great players. We’ve directed them and coached them in a manner to be great. But at some point, you’ve got walk out there and say, ‘You know what? I’m going to be great.’ That’s the next step.”

McCulloch, Adeoye and Joseph Ossai are the likely top three linebackers. McCulloch is definitely no stranger. He’s a senior with 66 career tackles, 3.5 sacks and a rather pivotal 65-yard interception return against Kansas. Ossai played in all 14 games last season as a freshman and started in the Sugar Bowl. Adeoye, another freshman, played in four games last year but retained his redshirt status.

In the secondary, Jones returns from injury alongside Sterns. Foster is a hitman at nickel. Expect to see some mix of Jamison, Green, Anthony Cook and Kobe Boyce at cornerback throughout August.

“At the end of the day, it’s a production business,” Orlando said of the corners. “I can’t reward somebody that’s with the second group because he doesn’t go against Collin Johnson.”

Orlando said he will start teaching defensive schemes on the first day of practice. He’ll likely go slower than normal given how the unit tilts younger. But it’s still a “run-and-hit business,” as he says. Don’t know what to do? Go out there and hit somebody, anybody.

“When they’re on top of their game, each guy individually, they’re dynamic, they really are,” Orlando said. “Now can we get those guys playing at a high level, every one of them? That’s the tricky part.”

How a Texas football rivalry helped inspire landing on the moon