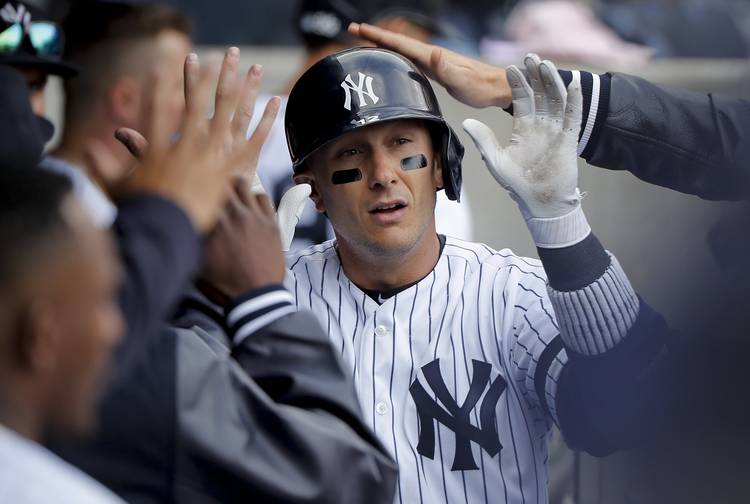 In this March 30, 2019 photo, New York Yankees' Troy Tulowitzki is congratulated by teammates after hitting a solo home run against the Baltimore Orioles. Tulowitzki has retired from baseball and will serve as a volunteer assistant coach for Texas. (AP Photo/Julie Jacobson, File)

David Pierce is having a killer summer.

And that’s nice since this past season as Texas’ head baseball coach almost killed him.

He’s making up for that disastrous 27-27, last-in-the-Big 12 season very quickly.

Sure, he has already lost starters at catcher and every infield position but second base. Defensive wizard shortstop David Hamilton chose to go pro, leaving no one in that spot. And Pierce never even got to say hello on campus to star recruit Brett Baty, a Lake Travis phenom who’s the newest plum in the New York Mets organization.

But he’s enjoying himself on an extended vacation that’s taken him and family members to the leather goods stores in Florence, the wineries and villages throughout Italy, the Louvre and what’s left of Notre Dame Cathedral in France. “I like Paris,” Pierce said in a phone call Monday. “I’ve seen a lot of Europe. But you can have Rome. It’s too crazy, it’s too busy. Somehow their chaos works.”

Pierce knows chaos. He’s in the middle of building something big out of the ashes of the 2019 season, and two huge factors are the addition of five-time All-Star shortstop Troy Tulowitzki as hitting and fielding coach and the move of Sean Allen to pitching coach on a staff that also includes Philip Miller.

Pierce called it “a win-win situation.” I’d call it a grand slam even if Tulowitzki won’t be allowed to hit.

Allen used to be a pitching coach, a job well-suited to his calm demeanor. And Tulowitzki used to be one of the brightest stars of the major leagues before retiring last week and agreeing to become Pierce’s volunteer assistant, which is a full-time position but an unpaid job, thanks to the NCAA’s shortsighted logic and poor treatment of college baseball.

Not that Tulowitzki needs the money. As he said in a conference call Monday, “Money’s never been why I played this game. I’m not in it for that.”

Considering he’s made north of $163 million in a highly decorated career that included a .290 career batting average and 225 home runs — the 12th most by a shortstop — and a pair of Gold Gloves and Silver Sluggers, Tulowitzki probably can afford Franklin’s and Matt’s when he moves to Austin next week.

Pierce, on the other hand, couldn’t afford not to take some actions. He said he’s always wanted to add a “pro contingent” to his coaching staff and got in the mix with Tulowitzki after former Longhorns great Huston Street phoned Pierce “very much out of the blue” in late June to say his former Colorado Rockies teammate was interested in coaching at UT.

He had just retired from the New York Yankees after the latest in a long line of injuries ended what began as a Hall of Fame-caliber career that will fall short of the numbers. Basically, Tulowtizki was hit for the cycle, injuring both quads, a hamstring, hand, wrist, groin, ribs, ankle, hip, heels and a calf.

Pierce was a bit skeptical at first, but acting on the tip and the endorsements from Street and former UT outfielder Drew Stubbs, he called Tulowitzki and asked that he take 10 days to consider the idea. On the ninth day, an anxious Tulowitzki phoned back. The 34-year-old major-leaguer arrived in Austin two days later along with his wife and son, Taz, and sealed the deal.

Tulowitzki is made for this job. He’s a worker bee. He gets along with people. “His ego was checked in,” Pierce said.

That said, he had been a star at Long Beach State where he was a two-time All-American but not — in his own words — a natural.

“I didn’t consider myself a natural,” Tulowitzki said. “I didn’t get drafted out of high school, and I basically begged Long Beach State to take me. Everything I did was through hard work.”

That’s a great message he’ll deliver to the Lance Fords and Eric Kennedys, whom he’ll work tirelessly to improve. Lord knows there’s plenty of room for improvement when the team batting average was stuck at a lowly .250 and only one player (Kennedy, at .310) hit better than .271.

But can someone for whom hitting seemed to come so easily coach others not as well-equipped?

If anything, Tulowitzki said the players he’ll be coaching are “probably more talented than I was at the same age.”

That’s doubtful, but Tulowitzki without question made himself one of the five best players in Rockies history.

Natural or not, he was remarkably gifted with tremendous skills both defensively and offensively, and he attacked the game with a vengeance and never wanted to settle for mediocrity. Tulowitzki deflected questions about his long-term future and his viability and interest in a job as a major-league manager or general manager, saying he’s always one “to keep the main thing the main thing.”

For now, he’s the richest volunteer coach in America.

At the very least, a natural fit.

Eyes on Texas: Ten Longhorns who need to shine as the curtain rises on Friday’s first practice