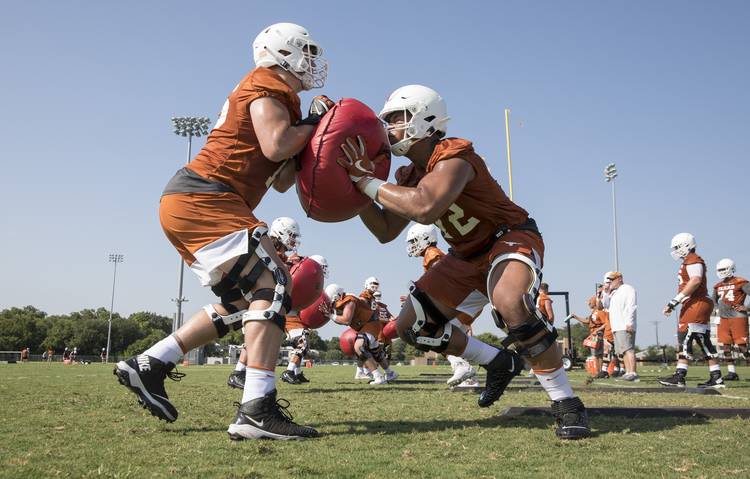 Tom Herman knows a top 10 college football team when he sees one.

And apparently he saw one this offseason because Texas’ third-year head coach said Friday that he voted his Longhorns “ninth or 10th” on his coaches’ poll ballot. Herman clearly is in the ballpark because his fellow coaching peers combined to rank the Longhorns 10th.

Hey, he did serve as the offensive coordinator for an Ohio State team that won a national championship in 2014. And, for that matter, his 10-4 Longhorns did finish ninth in last year’s Associated Press Top 25 poll after whipping up on Georgia in the Sugar Bowl. But he smartly is now trying to distance the team from that landmark victory and hasn’t even allowed gear from that New Orleans win to be worn around the football complex since January.

Time to move on, and Texas is picking up almost where it left off.

Didn’t get to follow up Friday and ask Herman where he placed four-time Big 12 defending champion Oklahoma in his vote, but we shall assume somewhere above Texas.

That said, on paper, the Sooners have never been more vulnerable than this fall, at least in this decade, because of all the losses they’ve endured. Lincoln Riley said goodbye to his Heisman Trophy-winning quarterback (again), his best wide receiver, four of his starting offensive linemen and has back a bunch of players on his mediocre defense with a brand new defensive coordinator. That’s a lot of change.

Don’t get me wrong. OU will be good again. But so will Texas.

He should. There’s a lot of talent on the field. With one football practice in the books, Herman and his staff at least are dealing with so many more knowns than unknowns. That hasn’t been the case his first two seasons since arriving from Houston.

With the season-opener against Louisiana Tech 29 days away, here’s what we think we know — and don’t know — about this team for starters:

The staff returns intact with no change anywhere. That can only bode well, especially in a reshaped Big 12 where Texas Tech, West Virginia, Kansas State and Kansas all are breaking in new head coaches.

(2) No doubt that Sam Ehlinger is the best quarterback in the league.

OK, maybe some have doubts, but the junior can hold his own with OU’s Jalen Hurts, Baylor’s Charlie Brewer and Iowa State’s Brock Purdy and, it says here, is better than those three. He’s a legit Heisman candidate.

(3) No question that the athleticism overall has improved, and the team is much faster. They certainly passed the eyeball test at Friday’s first practice.

(4) No lack of firepower at the skill personnel. Who knows, Ingram or Devin Duvernay might actually break one for more than 50 yards.

That would be a welcome change of pace since no other Power Five team went an entire year last season without a gain that long as Texas did.

(5) No Maryland on the schedule.

That’s a relief. Herman can breathe easy after losing twice to the Terrapins. Now if Texas were to stub its toe against Louisiana Tech, all bets are off.

After the opener, the schedule is formidable but not frightening. After games with sixth-ranked LSU and fourth-ranked OU, the Longhorns won’t play a team higher rated in the coaches’ preseason poll than No. 24 Iowa State. Four more Big 12 opponents received votes that would rank them between 33rd (TCU) and 46th (Baylor.)

What we don’t know seems less pressing. Like the possibility that two linebackers will emerge to replace Gary Johnson and Anthony Wheeler. Like the prospects that defensive line coach Oscar Giles can find a true pass-rusher. Like whether or not Cade Brewer can provide the production at tight end that Andrew Beck did. And more consistency out of a punter and better defensive fourth quarters.

But more than not, we know a lot of good things about this year’s team.

And if Texas can stand prosperity with so many bright lights on a program that appears — repeat, appears — to be rebounding in a big way on the national stage, Herman’s right on target. We won’t know that for a month or more. But we do know Herman has to win his first game of the season.

After all, another loss to start the year would be a big no-no.

Eyes on Texas: Ten Longhorns who need to shine as the curtain rises on Friday’s first practice